Spokane hard rock band the Mayfield Four has been through career travails since the release of their debut album, Fallout, in 1998, and it's hard not to read those troubles into the themes of the songs on their second full-length disc, Second Skin. First, despite the band's extensive touring in opening slots for major bands, Fallout failed to reach the charts. Then, rhythm guitarist Craig Johnson dropped out, leaving the "four" as a trio. (Guitarist Alessandro Cortini has been filling in on the road and appears in the band's publicity photos, probably to avoid confusion, but he is not on this album.) It is perhaps no wonder, then, that Second Skin is full of songs about struggle and perseverance. Nominally, romantic troubles are usually blamed, but songwriter Myles Kennedy often sounds like he has other things on his mind, notably in "Carry On," "Backslide," "Flatley's Crutch," and "Believe," all of which contain exhortations to stick things out. There are times when Kennedy actually does seem to be singing about romance, though. "Mars Hotel," a tale of love lost, has a good, catchy chorus that gives it the potential to be a hard rock hit on the order of Fuel's "Hemorrhage (In My Hands)," for example, and "White Flag," a surrender to love, is one of the album's few ballads. Often, Kennedy's lyric sentiments are at odds with the band's metallish sound, with the music carrying a more aggressive import than the words. The Mayfield Four display a determination to keep at it on Second Skin, and there are several possibilities for radio play, which is good, since they're going to have to show some sales potential for Epic to remain interested. 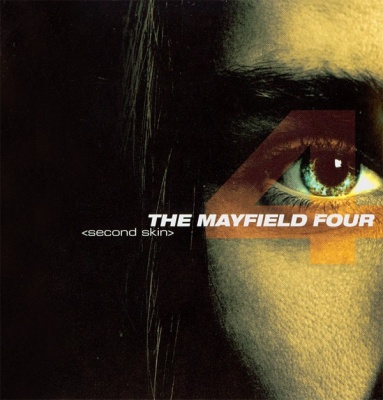