With the reunion studio disc Brave New World failing to recapture the imagination and intensity of Iron Maiden in America and even in many places in the band's European homeland, going to Brazil seemed like a smart move. It was one of the few places that a quarter of a million people would turn up to see the act in 2001, and judging from the audience response, the band's set list didn't bother them much either. At times, you had to be wondering what they were listening to. Sure, the band's energy is in abundance here (it's hard to mail in a performance in front of so many people who seem to scream at every single move the band makes), but an entire disc's worth of material of the two here is wasted. What is the point of doing not one, but two songs from the black hole that sucked the will to live from metal fans the world over (aka "the Blaze Bayley period")? When Kiss re-formed, they were smart enough to not play the crap that made everyone want them to re-form in the first place, and nobody wants to see David Lee Roth get back with Van Halen to sing "Without You"; whatever possessed Steve Harris and company to even approach Bruce Dickinson and suggest he go along with it is almost as perplexing as Dickinson agreeing to it, yet here it is -- "Sign of the Cross" and "The Clansman" in all their boring anti-splendor. The inclusion of some of Dickinson's CMC solo stuff would have been ten times better if peripheral material they must. Not as unexpected, but only slightly less dismal, is the inclusion of six tracks off the aforementioned Brave New World, which was neither brave nor new. There might be one good song between the sextet that was presented if you look real hard. The majesty of the classic material saves the day, and even though they had a sympathetic foreign crowd by the short and curlies, the band was smart enough to close the set with the classic material. Simply put, you can't go wrong with a closing volley of three tracks from Number of the Beast and a couple more from the band's eponymous debut. The likes of "The Trooper" and "Wrathchild" sound even better next to anything the band recorded after Seventh Son of a Seventh Son, but that's faint praise. At the end of the day, Rock in Rio won't make you wish you were there, the barometer of what a great concert recording should do, but it will make fans nostalgic for the time that Iron Maiden was a creative force. Sadly, that time seems to have eclipsed years before the band took the stage in Brazil that evening. 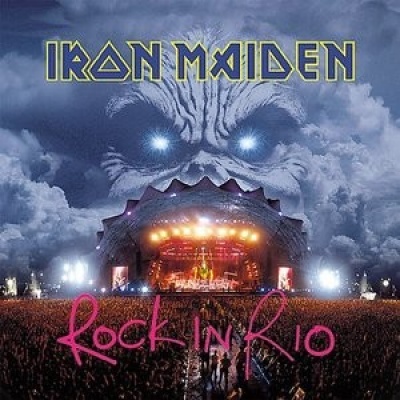