Drummer Nicko McBrain kicks off Iron Maiden's 13th studio record with an uncharacteristic one-two-three-four before launching into the rousing opener, "Wildest Dreams." This bar-band sensibility permeates Dance of Death's first three refreshing yet unremarkable tracks before shifting into the more familiar fantasy rock of previous releases. That shift begins with the remarkable "Montsegur," a brutal, melodic assault that recalls the group's glory days and showcases lead singer Bruce Dickinson at his venom-spitting best. The anthemic "New Frontier" is a musical sibling to the band's 1982 classic "Number of the Beast" and eclipses any doubt about the band's ability to keep up with the phantom specter of age. Despite the dark imagery and the ferocity of the performances, there's a looseness to the record that conveys a surreal sense of fun. They enjoy playing together, and that more than anything shines through on old-fashioned rockers like "No More Lies" and "Gates of Tomorrow." No Iron Maiden album would be complete without a Dungeons and Dragons-style epic, and they deliver on the hammy title track and the lush closer, "Journeyman." The group's innate ability to consistently cater to its fans' stubborn tastes, while maintaining a level of integrity that other veteran bands displace with unintentional Spinal Tap zeal, is a testament to its talent and experience. While the keyboard-heavy sound of their previous release, the excellent Brave New World, creeps into some of the more indulgent tracks, Dance of Death is a triumphant return to form for these heavy metal legends. 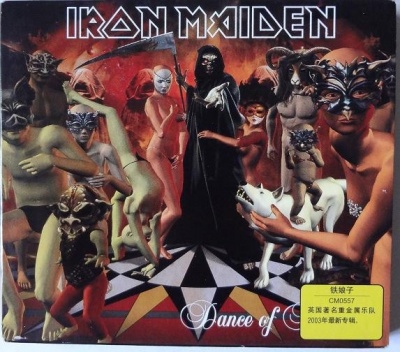