There are several attractions on this album of Schumann works by German-American cellist Jan Vogler, accompanied by the celebrated Hélène Grimaud (who properly reins in some of her more extreme tendencies here). The final Andante and variations, Op. 46, for the odd but quintessentially domestic combination of two pianos, two cellos, and horn, is not heard very often, and it's one of Schumann's few lighthearted works. In the Fantasiestücke for cello and piano, Op. 73, Vogler cultivates an emotionally intense, intimate mood and achieves quite a dramatic, involving performance. He brings the same qualities to the main attraction, a performance of the song cycle Dichterliebe, Op. 48, altering the music only with a few octave transpositions. The trouble is that it's hard not to ask why the work should have been performed this way. Of course transpositions of many kinds were common, even at the height of the Romantic cult of the individual composer, but the idea of an "instrumental" version of a purely vocal work, beyond the semi-popular potpourri of opera tunes and the like, was not so common, and it's hard to argue that anyone would have performed Dichterliebe this way in the middle 19th century. Vogler doesn't try to argue that it would have been, but his justification for the performance seems to boil down to the fact that he wanted to play the works; the idea that you might actually get something out of the music this way that you wouldn't when hearing it sung is left pretty vague, and you come up with little of your own to support it. There's nothing about the performance that leaves you unable to enjoy it, but it seems equally true that those who know Dichterliebe will have the words running through their heads while listening to it. 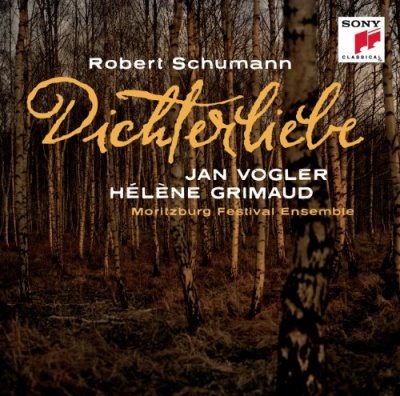