Right Through the Bone Review

With the previous RCA Red Seal release On the Threshold of Hope, the Canadian ARC Ensemble attempted to raise the profile of a composer already reasonably well recorded, but not necessarily well-known composer Mieczyslaw Weinberg. In Right Through the Bone, ARC Ensemble takes a look at Dutch composer Julius Röntgen who, in addition to creating 650 works in a career spanning from toward the end of the Romantic period to past the first phase of the modern, also happens to be distantly related to Nobel Laureate Wilhelm Conrad Röntgen, the discoverer of X rays. As with Weinberg, Röntgen is no stranger to recording, although heretofore most of his work has only appeared on minor, and mainly Dutch, labels. To its credit, for Right Through the Bone ARC Ensemble selected three major chamber works -- all late-period Röntgen -- that had not been recorded, and the Viola Sonata in C minor has only appeared on disc once before. Within in his own time, or rather in the last two decades of it, Röntgen was widely viewed as conservative; although he took an interest in the music of Hindemith, Stravinsky, and other younger composers, Röntgen's own music remained rather solidly within the domain of the post-Romantic tradition stemming from Brahms. That does not mean he was a bad composer or that Röntgen's music is not worth reviving, and with the continued thaw of bias against music of late Romantic holdovers since the dawn of the twenty-first century perhaps Röntgen's time has come at last.

In terms of advocacy, Röntgen could hardly hope for better than what the ARC Ensemble offers here. The playing of both individual members and of the ensembles built out of these Royal Conservatory staffers is crisp, dynamically well modulated, full of drama, and with a total understanding of the musical texts at hand, something one doesn't always encounter in recordings where the work is mainly learned to facilitate the product. Moreover, these pristine performances do succeed in making the point that there are aspects of Röntgen's work that are memorable and rewarding. The Viola Sonata is reminiscent of Franck's famous A minor Sonata except that it's not quite so morose, and there is a swinging, folksy quality to the "Allegro comodo" in the Trio for clarinet, viola, and piano in E flat. The String Sextet in G, composed in 1931, takes the same instrumentation that Arnold Schoenberg used for his famous Verklärte Nacht and utilizes it for entirely different ends. Coincidentally, NPR programmers should note that there is a thematic tag in the Allegro of the Piano Quintet in A minor that strongly resembles the theme to All Things Considered, the popular NPR news program. While Right Through the Bone is not such a powerful revelation that Röntgen's place in the scheme of things should be relocated from second tier to the first -- as probably should be done in the case of Mieczyslaw Weinberg -- it is still a worthwhile undertaking and a good choice for the ARC Ensemble to put its considerable talents behind. Right Through the Bone will most likely satisfy, and even surprise, listeners who believe that the great German chamber music tradition expired when Schoenberg put the finishing touches on Verklärte Nacht in 1899. 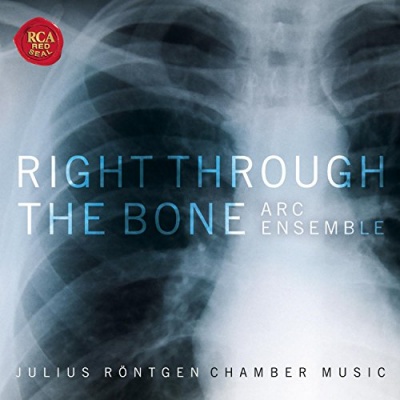 Right Through the Bone Album Information