On the Threshold of Hope: Mieczyslaw Weinberg Chamber Music Review

This remarkable disc of chamber music and vocal music by Polish-Russian composer Mieczyslaw Weinberg adds greatly to our understanding of his rarely recorded chamber music. All three works come from 1944-1945, the final two years of the Great Patriotic War, that is, the years after the Polish composer had moved to the U.S.S.R. following the German invasion and occupation of his homeland. But while the cycle of songs on poems by Shmuel Halkin opens with "To the Red Soldiers" and closes with "To the Warrior," the Clarinet Sonata and the Piano Quintet seem more personal in mood and intent. The combination of passionate intensity, acerbic tonality, and folk-song-influenced melodies is highly characteristic of Weinberg's better known symphonies, and like them, these chamber works are superbly composed with memorable themes, powerful forms, and infectious rhythms. For listeners who already know Weinberg's music, this disc will be irresistible. For those who don't know Weinberg but already know Shostakovich's piano quintet or songs on texts by British poets, this disc will be interesting and probably enjoyable. RCA's sound is clean, full, and vivid. 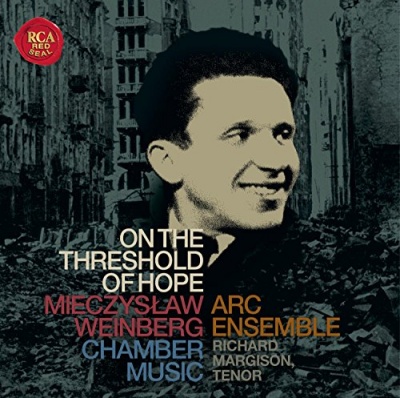