Portraits in Jazz and Clave Review

In this program of mainly Afro-Cubanized jazz standards, conga man Barretto assembled an all-star group of friends to complement his regular working New World Spirit band. The icons include longtime friend Kenny Burrell, whose guitar playing is a key component in the makeup of every selection. Bassist Eddie Gomez, tenor saxophonist Joe Lovano and trombonist Steve Turre join such up-and-coming younger musicians as trumpeter John Bailey, saxophonist Adam Kolker and pianist John DiMartino. Second percussionist Bobby Sanabria is alongside, as is the oustanding trap drummer and longtime Barretto bandmate Vince Cherico. The recording is bookended by Duke Ellington's music. It's front-loaded with "The Mooche," ignited by a simmering bass and left-hand piano ostinato plucked from Horace Silver's "Senor Blues." Conch-shell moans from Turre and punchy congas intro this classic, with Burrell's second melody lead and horns on the first and third. "Cotton Tail" is a good swinger with Latin underpinnings and loads of Burrell (refer to Burrell and Barretto on Burrell's classic Blue Note date Midnight Blue). At the end of the CD is the lesser-known "Oclupaca," taken as a steamy cha-cha. Also included is Billy Strayhorn's Johnny Come Lately," which has clave/mambo rhythms buoying echoed trumpet and tenor lines talking back and forth. The interplay of this counterpoint is stunning, again kicked off by the fuse of Burrell's guitar. There's the fluttery horn intro and dueling tenors on John Coltrane's "Like Sonny," the slight tango-ish "Lamento Borincano" and its heavy dose of Latin Burrell, and the laid-back horns setting up demure-to-forceful piano by DiMartino on Wayne Shorter's "Go." Then there's Thelonious Monk's brisk and brusque "I Mean You," cooked by the unison horns to golden brown perfection with claves, montuno piano and a patented deft bass solo from the brilliant Gomez. A most Afro-Cuban "Cancion del Fuego Fatuo" is quite subtle, Burrell again the focal point with much to say beneath and above the surface. Of the many fine recordings Barretto has produced in the past 30 years as a leader, this ranks right up in the top three, due to the undeniable musicianship of his select guests, the innate ability of his own band, and the meticulous selection of jazz pieces whipped into tangy salsa. It's a winning, highly recommended combination. 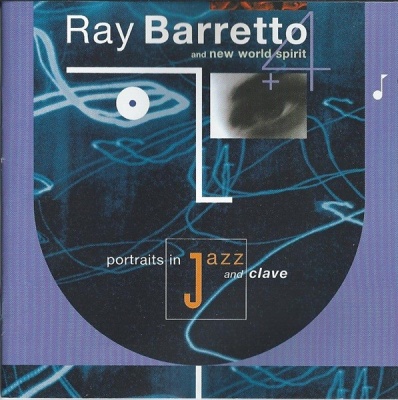