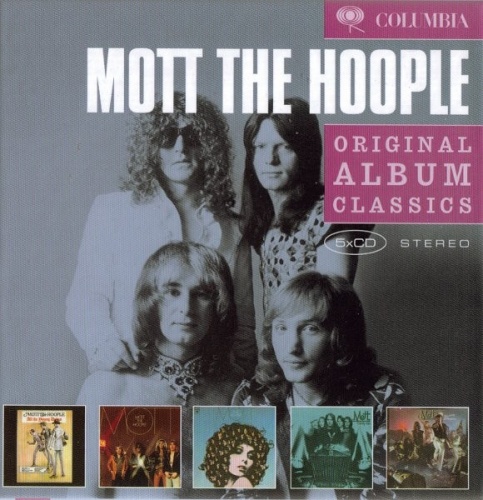 While Sony Germany's Original Album Classics box sets are generally very good and representative -- even if they are an inventory clearance method to move classic albums as well as lesser ones off the shelves by packaging them together in a slipcase -- occasionally there are problems, and this set, by one of the worthiest bands the label ever recorded, is one of them. Great Britain's Mott the Hoople existed between 1969 and 1976, and recorded for two labels: their earliest recordings were with Atlantic between 1969 and 1971, and their best known were cut between 1972 and 1974 for Columbia, while there were two later dates -- both of them included here, unfortunately -- for the latter imprint that should never have seen the light of day. Mott's great trilogy of albums -- All the Young Dudes (their commercial breakthrough), Mott, and The Hoople -- are all included here. While only the first two of these feature guitar genius Mick Ralphs -- who would, with Paul Rodgers, later blast Bad Company into rock & roll glory (BC's big hit "Ready for Love" was originally recorded on All the Young Dudes) -- all three albums heavily showcased the brilliant songwriting and emerging super glam god status of frontman Ian Hunter at center stage. These three recordings alone are worth the price of the box. Sadly, Hunter departed after The Hoople, and left Morgan Fisher in charge of the band. Ugh. The two latter albums in this box are simply horrific, making the purchase of the entire thing rather useless when the other three are available for less money. Sadly, this is one to avoid. There was a great live record after The Hoople that could have easily been subbed here, making this box set a less dastardly purchase.