New to This Town Review

Though Kix Brooks' tunes on most Brooks & Dunn albums were overshadowed by his partner's, he's no less a songwriter. It was his sense of humor, his everyman singing voice, and his cowboy swagger and strut that gave the band much of its appeal. New to This Town is Brooks' first solo album since 1989. He wrote nine of the 12 cuts here, including the title track and single that features Joe Walsh on lead guitar. What's most interesting about the cut is that sounds like it was written with the guitar slinger in mind: Melodically, texturally, and even production-wise, it feels close to the songs that appeared on Walsh's Barnstorm-era albums from the early '70s. Since Brooks wrote and produced the track, this had to be intentional. On "There's the Sun," he shows that he understands how much the blues are part of country music -- despite the modern funky drums. "Bring It On Home" is one of those down-home, midtempo love songs that Brooks & Dunn wielded so expertly, but the soulful vocal here is a genuine -- and welcome -- surprise. "Tattoo" and "Moonshine" are standard contemporary country fare, but easy on the ears because the production is a bit warmer than what we normally hear on the radio in the early 21st century. The way Brooks delivers Rhett Atkins' "In the Right Place" accents the soulful quality in his voice again -- and convincingly -- and adds dimension to his musical persona: "Hope you don't mind if I put a little Otis Redding on" feels absolutely right in his delivery. The set's final four cuts were all co-authored by Brooks. "Next to That Woman" and "Let's Do This Thing" are trademark, rabble-rousing arena rockers, while "Closin' Time at Home" and "She Knew I Was a Cowboy" both showcase his vocal skill with ballads and softer hooks. Brooks doesn't miss any tricks here, but thankfully he left the Auto-Tune off his solo album. On New to This Town, he's focused on what he does best as a writer while stretching himself as a singer. 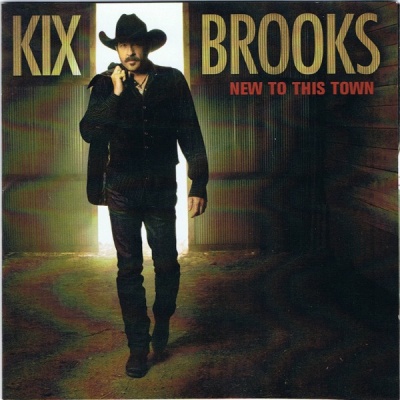 New to This Town Album Information