Much Ado about Nothing [Original Motion Picture Soundtrack] Review

Melodramatic ham that he is, Kenneth Branagh seldom lets a minute go by in his screen adaptations of Shakespeare without some kind of musical accompaniment. Patrick Doyle is a shameless enabler for Branagh's music addiction, dealing out 24 tracks worth of sticky sweet orchestrations to satisfy the director's jones. Much Ado About Nothing was Branagh's second Shakespeare film, and at the time of its release his ebullient directorial style seemed radiant and charming. The film was widely regarded as a magnificently robust Hollywood popularization of one of the Bard's cheekiest comedies. But Branagh's unwinking earnestness began to wear thin in later efforts like Hamlet and Love's Labours Lost, making Much Ado seem somewhat light weight in retrospect. Doyle's contribution is nevertheless suitably sweeping and frothy, even if it does borrow rather too liberally from his previous (and superior) compositions for Henry V. As usual, Doyle's greatest work comes in classical vocal tracks like the dirge-like choral passage "Pardon Goddess of the Night" and the winsome musical setting for Shakespeare's poem "Sigh No More Ladies," which receives a beautiful reading in the opening credits by the incomparable Emma Thompson. These help to compensate for the egregiously swollen romantic pieces that underscore ridiculous shots of a lovestruck Branagh splashing around in Venetian fountains. 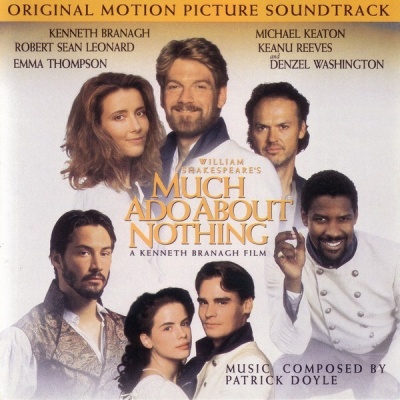 Much Ado about Nothing [Original Motion Picture Soundtrack] Album Information