Recorded over 13 years between 1975 and 1988, Murray Perahia's cycle of the complete piano concertos of Mozart, including the concert rondos and double concertos, remains perhaps the most enduring monument to his art. What is it about Perahia's art, some skeptics might ask, that is worth enduring? For one thing, as this 12-disc set amply demonstrates, there is his incredible tone. Clear as a bell, bright as the sky, and deep as the ocean, Perahia's tone is not only one of the wonders of the age, it's admirably suited to the pellucid loveliness of Mozart's music. For another thing, there is his unbelievable control. From the simplest melody to the richest sonorities, Perahia's control makes him the master of everything he surveys. For yet another thing, there is his astounding sense of rhythm. From the most vivacious Allegro con spirito to the most lugubrious Larghetto, Perahia's tempos are always brilliantly judged and wonderfully propulsive. To top it off, there are his poetic interpretations. While some cynics might assert that his interpretations are all beautiful surface with no profound depths, more sympathetic listeners would argue that Perahia's beautiful surfaces go all the way to the bottom of Mozart's music. Accompanied by the accomplished outstanding English Chamber Orchestra -- the wind playing alone is worth the price of the set -- Perahia's cycle of Mozart's piano concertos should be heard by anyone who loves the music. Sony's late stereo and early digital sound is consistently clean, colorful, and immediate. 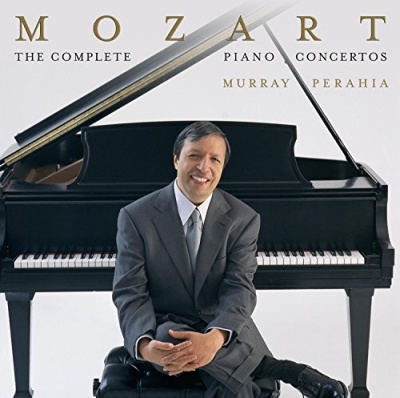