Back in the early days of stereo, there were those who argued, and argued very persuasively, that George Szell and the Cleveland Orchestra were the greatest Mozart orchestra/conductor combination in the world. Despite those who proclaimed the smooth refinement of Karajan and the Berlin Philharmonic and the deep humanity of Böhm and the Vienna Philharmonic, they'd assert that Szell and the Cleveland were just as refined but with more color and depth and that they were as humane but with more wit and warmth. And with evidence like the performances reissued here, who could disagree with them? With performances originally recorded between 1958 and 1968, this program of Mozart's Overture to Le nozze di Figaro, Eine kleine Nachtmusik Serenade, and Symphony No. 28, No. 33, and No. 35 mixes better and lesser known works. In Szell and the Cleveland's performances, every work is supremely poised, exquisitely polished, and as close to absolutely perfect as makes no discernible difference -- in other words, pure Mozart performances of the highest order. Columbia's original stereo recordings were too tall, thin, and narrow; Sony's 2006 digital remasterings are full, warm, and deep. 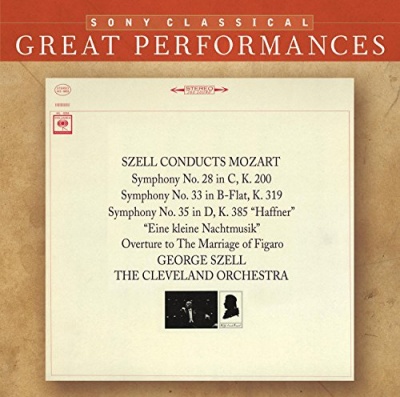