Throughout his career, Bob Dylan has delighted in confounding expectations and reveled in being cryptic, but few projects have been as deeply confounding and cryptic as his 2003 film, Masked and Anonymous, where he stars as rock legend Jack Fate, who has been jailed in a post-apocalyptic, "mythological third-world America" (the words of the film's director, Larry Charles) in the throes of a civil war, but is let out of prison to perform at a "dubious benefit concert" (the words of Alan Light, who contributes necessary but still confusing liner notes). Within this scenario pass scores of celebrity cameos, all eager to be seen on-screen with the legend himself, particularly after the career revival of Love and Theft, along with numerous Bob Dylan songs, only a handful of which are sung by him and most of which are in radical reinterpretations (several sung in different languages). Perhaps this all makes sense within the film -- Light claims it does in his liner notes and Salon.com's Stephanie Zacharek raved about it, both citing a sequence where a young girl sings an a cappella version of "The Times They Are A-Changin'," which is absent from the soundtrack (for the record, they were virtually the only two voices praising the film; most critics called it bizarre and embarrassing) -- but condensed to a soundtrack, it's merely baffling.

Some of the interpretations are no more radical than Dylan's own reworkings of his songs -- it is no great stretch to have Shirley Caesar sing "Gotta Serve Somebody" and the Grateful Dead's loping version of "It's All Over Now, Baby Blue" is hazily familiar, while Sertab emphasizing the inherent Mideastern vibe of "One More Cup of Coffee" makes sense (though it is not as compelling or risky as recent covers of the tune by Robert Plant and the White Stripes) -- but these are overshadowed by such oddities as the Magokoro Brothers singing an ethereal version of "My Back Pages" in Japanese and Articolo 31's Italian rap version of "Like a Rolling Stone." While these are interesting, the latter plays like a novelty, and the cumulative effect is that Masked and Anonymous not only never gains momentum, but cannibalizes its own best moments and makes for a difficult listen; after all, it is not a challenging, rewarding listen, it's merely a messy one. And this is too bad for, whatever the merits of the film or the music within the film, there are some good moments here, including a rollicking bilingual "On a Night Like This" from Los Lobos, the Dixie Hummingbirds recording of a new Dylan tune, "City of Gold," and four new tracks by Bob and his crack touring band of the early '90s, highlighted by a muscular "Down in the Flood" and a new version of "Cold Irons Bound." These, of course, make this necessary to the Dylanphiles who would have bought such an odd album anyway, but their presence makes it hard not to wish for a full album like this instead of the murk that is Masked and Anonymous. 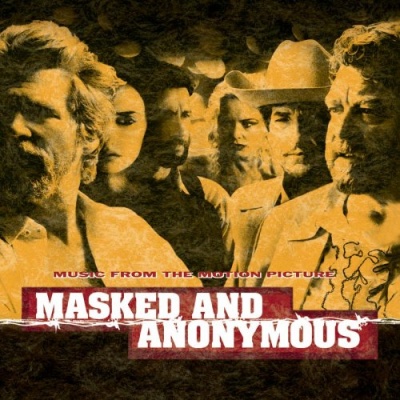