Living with the Law Review

Chris Whitley's 1991 debut, Living with the Law, was recorded in Daniel Lanois' New Orleans mansion and was produced by Malcolm Burn. The sublimely dark, creepy, and possessed collection sounds completely out of place for the era of slick pop/rock like Milli Vanilli. The tortured album is rich with old-style sounds, from slide guitars to pedal steel. (Lanois contributes some on the album.) Living with the Law has a full, ambient feel that transports the listener into the recording. Whitley humbly (and falsely) claims, at the beginning of the record, that "God knows it's all been done." But these 12 songs attempt an original look at an honest style and passionate mood that is lacking in much of rock music. Whitley sings of drug abuse, alienation, failure, and loneliness with a Delta blues flavor. Standout tracks include "Phone Call from Leavenworth," "Big Sky Country," and "Dirt Radio." Those who liked Whitley's Dirt Floor must own Living with the Law if they don't already. It is more of a full-band sound, but similar in tone and feel. An exceptional and mesmerizing debut, one with the potential to inspire all who hear it. (This release is also fascinating for those who enjoy Rocket House. Influences on the 2001 album can be heard throughout Living with the Law, released a decade earlier.) An album Robert Johnson may have recorded, were he still alive. 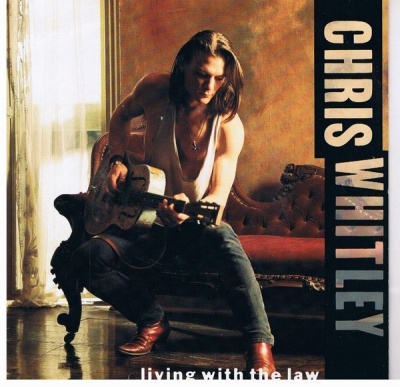 Living with the Law Album Information