Mark O'Connor's second CD with his Hot Swing Trio is more than just a salute to the late, legendary jazz violinist Stephane Grappelli; it firmly establishes as him as a bona fide jazz violin virtuoso, thanks to being distributed by a major label this time around. The capable guitarist Frank Vignola plays gypsy swing à la Django Reinhardt without sounding like a clone; bassist Jon Burr, who spent a decade as a member of Grappelli's rhythm section in his last years, provides a perfect match for his two bandmates. Each member of the trio contributed originals to the session. O'Connor's "In Full Swing" is absolutely breathtaking, while it is fun imagining how Grappelli and Reinhardt might have interpreted his enticing "Stephane and Django." Burr's pulsating "Three for All" and Vignola's lyrical "A Beautiful Friendship" are also worthwhile songs. The remaining selections all come from the repertoire of either Grappelli or the Grappelli-Reinhardt partnership, with occasional guest appearances by Wynton Marsalis and singer Jane Monheit. There are plenty of fireworks in the trio's wild ride through "Limehouse Blues" (which, of course, isn't a blues at all). The high-flying duo introduction to "Tiger Rag" by O'Connor and Marsalis is a meeting of two masters. Monheit's interpretations of "Misty" and "As Time Goes By" are merely average, and she doesn't loosen up enough to appreciate the fun within Fats Waller's "Honeysuckle Rose," though Marsalis makes up for her shortcomings. In any case, Mark O'Connor's Hot Swing Trio provide first-rate swing all by themselves, so adding guests isn't really necessary. 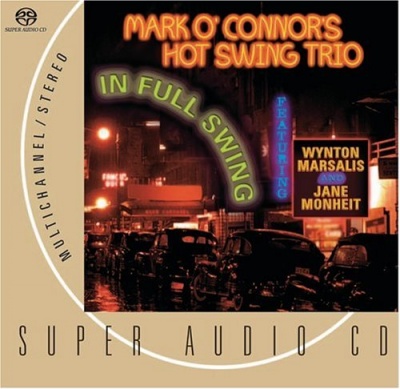