Austrian soprano Angelika Kirchschlager "looks like Nicole Kidman, moves like Sarah Vaughan, has the most open, generous vowels (and) perfect vibrato and diction" wrote one English reviewer. On-stage and in recital, she unquestionably prefers material from around the end of the nineteenth and beginning of the twentieth century. However, she also sings a couple of Mozart roles, and in 2002 Kirchschlager recorded an album for Sony of Johann Sebastian Bach arias that was reasonably well received. Perhaps it is time for Handel as well?

Sony Classical's Handel: Arias gets off to a terrible start; one listens with growing surprise as Kirchschlager hastily gobbles up Handel's melodic line only to indelicately vomit it back out in "Qui d'amor" from Ariodante. In this case, Kammerorchesterbasel is a little off the mark as well -- the whole thing feels a little queasy. They are better in "T'amerò dunque -- Aria: Con l'ali di costanza," though Kirchschlager is still a little under the music, falling a tad flat here and there and failing to achieve a leap at one point in this ridiculously difficult aria. "Scherza infida," the third track on the program, is the first time we get a sense of what we are supposed to be hearing. It is decent, and the selections from Giulio Cesare are not so bad; Kirchschlager has sung the part of Sesto several times in different houses, and this familiarity and comfort with it makes for the most engaging music on the album. Nevertheless, once we find ourselves in Handel's mega-obscure Arianna in Creta, the queasiness and instability returns -- Kirchschlager simply does not know what to make of this music. The accompaniment perks up here and there, managing to get a little muscle into "Svegliatevi nel core" from Giulio Cesare, but the Kammerorchesterbasel is never really able to call up the fire that characterizes, say, Il Giardino Armonico's accompaniments for Cecilia Bartoli. Much of it sounds serviceable, relaxed, swelling in and out with the appropriate sighs and longuers, but also strangely dead, like a stuffed bird seemingly ready to fly out the window that can't because it's stuffed. Kirchschlager has toured with singer Barbara Bonney and has some things in common with her -- a good voice, fully able to negotiate the treacherous territory of operatic singing, but dutiful and lacking in love. It would be interesting to hear Kirchschlager sing something she really likes -- if it is playing the title role in Nicholas Maw's opera of Sophie's Choice then maybe that is what she should be recording instead of Handel. It seems like Sony is trying to raise the same spark that the late Lorraine Hunt Lieberson use to ignite with ease in her recordings of Handel, but in much of what's here, the flint lands with a dull thud. As to exploiting Kirchschlager's looks, the 32-page booklet, packed with photographs of Kirchschlager taken in the Liechtenstein Museum in Vienna, which also served as the recording venue, is ridiculous. All but one of the photos feature Kirchschlager gamboling about in ill-fitting black pajamas and the remaining photo shows her in a slip, taken from behind. It's hard to make out Kirchschlager's face in most of these shots -- one is a picture taken over the shoulder of a statue, but it may as well have been shot from behind a tractor for what it reveals. It is a very, very amateurish-looking photo shoot, appropriate visuals to go with an album where the producer seems not to have cared much about what he/she was getting out of the star attraction. 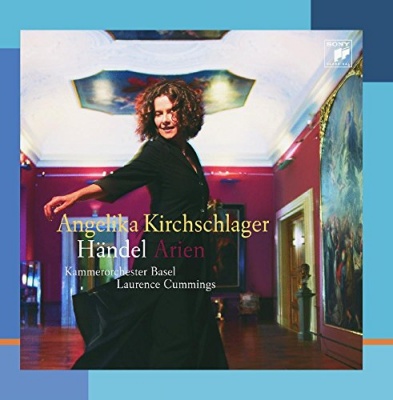