Luke Combs opens up Growin' Up with "Doin' This," a typically blunt piece of quasi-biography where he claims if he wasn't a big star he'd still be singing -- "I'd still be doin' this if I wasn't doin' this." Intended as a tribute to his genuine, down-home roots, "Doin' This" winds up as a simultaneous testament to the absolute literalism of Luke Combs. Now on his third album, Combs became one of the biggest stars in country music in the 2020s by sticking to the basics, so he's not about to shake up the formula on Growin' Up. Everything here sounds vaguely like it could've been released at some hazy point in the past, a record that's proudly built on the kind of new traditionalist values that reigned during the 1990s. With his gravelly growl, Combs sounds right at home in this clean, uncluttered setting, just as he did on his previous two records, This One's for You and What You See Is What You Get. The biggest difference on Growin' Up isn't the star power that Miranda Lambert brings -- Eric Church appeared on What You See Is What You Get -- but the general sense that Combs is operating on a grander scale this time around. The album sounds bigger, crisper, and fuller than its predecessors, boasting a sense of confidence that never suggests arrogance. Maybe it never sounds as if Combs is swaggering because his songs are so resolutely modest, having no ambitions other than delivering very good renditions of shopworn themes. Name a kind of country song, and you'll probably find it here: drinking songs, songs about regret, songs about a broken heart, songs about the past, songs about fishing. They're all sturdy tunes delivered with no nonsense from Combs but also no flair. He's such a traditionalist that he doesn't bother with putting a distinctive spin on country clichés: he's happy to deliver them and maybe even inhabit them. 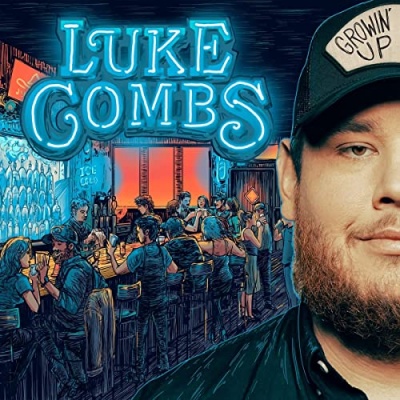