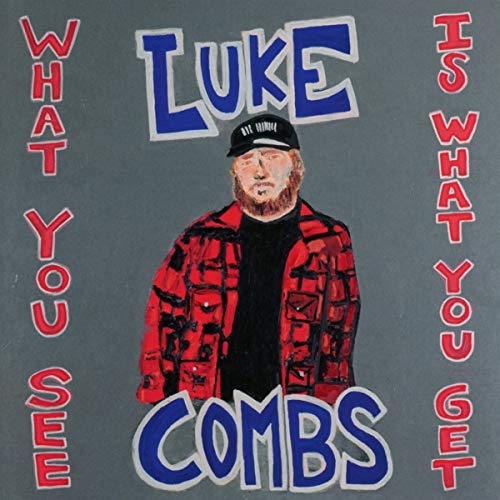 Luke Combs almost seems to be shrugging with the title What You See Is What You Get, a suspicion underscored by the album's perfunctory cover art. Neither suggest that Combs harbors any grand ambitions, an impression that isn't strictly true. The North Carolinian styles himself as a humble singer carrying on country traditions steeped in the sounds of the '90s but with roots that stretch back much farther. Certainly Combs leans into that heritage by inviting Brooks & Dunn to sing on the rowdy "1, 2 Many," one of many drinking tunes scattered throughout What You See Is What You Get. While he may kick up some dust, Combs is a sentimentalist, singing song after song about his home and heart. These are time-honored traditions in country and Combs never attempts to subvert expectations here, or even freshen them up. He aims straight down the middle of the road, adding a few layers of gloss and punchier rhythms to a formula he established with his 2017 debut This One's for You, with slight alterations in the production that amount to an album that feels clean, slick, and confident, and captures a singer embracing his burgeoning stardom. If there are any flaws to What You See Is What You Get, it's that its very length can work against it. At 60 minutes, the album runs through so many sturdy midtempo tunes about family, heartbreak, and love that the seams holding Combs' everyday persona together start to show -- all the variations on a theme can't help but reveal the calculation behind the image -- but taken on a song-by-song basis, What You See Is What You Get is a solid album, proudly made just the way they used to be back in the '90s.