Four on the Floor Review

The Nylons' performing career began in 1980 at a time when a cappella outfits were not in vogue. The fact that the Nylons were unlike any a cappella act on the scene made them stand out and earned them accolades and a devoted audience almost immediately. The band has existed in one form or another for more than 25 years, but it is the original quartet of Claude Morrison, Arnold Robinson, Paul Cooper, and Marc Connors that created the Nylons' most beloved recordings. Four on the Floor, their first live release, is the first album to be recorded after Cooper's departure, although his presence is felt throughout. Cooper's replacement, Micah Barnes, is technically a better vocalist than Cooper, but Marc Connors remained the heart and soul of the quartet even while he was battling AIDS (this was his final release). The Nylons were performers and showmen and put a lot into their act, so this audio souvenir is only half of the story. Their somewhat camp performances were always a delight, but their voices were really the stars of the show and this release proves that the band could really cut it live. In fact, it's almost hard to believe that these were actually recorded in front of an audience, and the performances are nearly as perfect as the studio versions. "Up on the Roof" features Connors' brilliant voice wringing every possible ounce of emotion out of the lyrics. "Heavenly Bodies" is one of Morrison's best tracks and certainly doesn't disappoint in this context. Tracks from the over-produced Rockapella album sound wonderful in this live setting, including "Wildfire." There's even a handful of songs previously unreleased by the Nylons, including "One Fine Day," "Good Old Acapella," and the wonderful "Amazon," a Connors-penned track that sounds like it may have been an unreleased studio track with the sound of the audience tacked on the beginning and the end in post-production. While live albums often pale when compared to an artist's studio releases, Four on the Floor is likely to be the perfect starting point for anyone wanting to further investigate the charm of the Nylons. 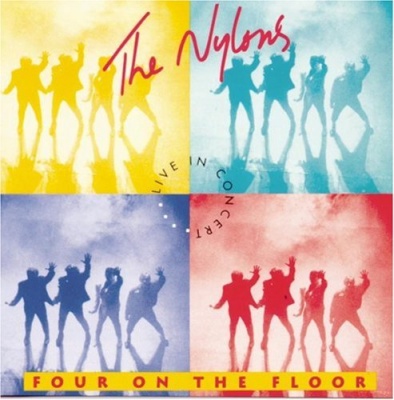 Four on the Floor Album Information