Impressive as the alignment of such stars as Isaac Stern, Jaime Laredo, Yo-Yo Ma, and Emanuel Ax might be, these 1990 recordings of Fauré's Piano Quartets present something less than a harmonic convergence. A classical supergroup, the four musicians bring enormous talent and strong personalities to their performances, but also serious problems of cohesion, accuracy, and balance, which suggest competitive egos and inadequate rehearsal time. The Piano Quartet No. 1 in C minor, Op. 15, suffers from some scrappy passages, wobbly intonation, and an aggressive edge that is too savage for Fauré. Instigating this fierce interpretation with his driven piano playing, Ax pushes the strings too hard, and Stern, Laredo, and Ma sometimes sound like they are scrambling to keep up. The group's performance of the Piano Quartet No. 2 in G minor, Op. 45, is much milder in approach and less scattershot in execution, but it also seems insufficiently practiced, variable in tone, and uncertain in purpose. Reissued in 2004 for the Masterworks Expanded Edition, this disc includes a bonus track of Yo-Yo Ma's transcription of Massenet's Meditation from Thaïs, which he performs expressively with pianist Kathryn Stott. The sound has been remastered with Direct Stream Digital and SBM Direct, and is satisfactory, though not Sony's best. 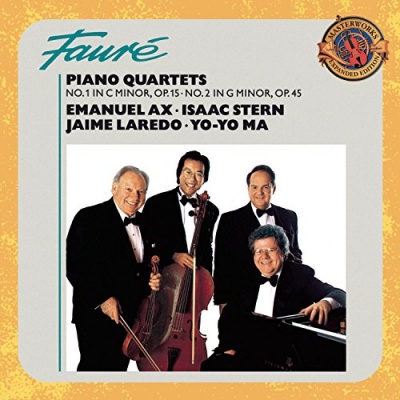