Recorded for two different record companies over 14 years in five different locations, Emanuel Ax's Brahms concertos plus his Two Rhapsodies, Op. 79; Three Intermezzos, Op. 117; and Four Piano Pieces, Op. 119, are joined together for the first time here on two discs. Given the span in space and time, Ax is surprisingly quite consistent in his approach. The same emphasis on content over form, on heart over mind, on lyricism over drama is equally present in both concertos as well as in all the solo works. Accompanied by the strong-willed James Levine leading the Chicago Symphony in 1983, Ax turns in a passionate but nuanced performance of the D minor Concerto, while accompanied by the self-effacing Bernard Haitink leading the Boston Symphony in 1997, he turns in a powerful but controlled performance of the B flat major Concerto. While listeners who enjoy Richter and Gilels' scowling Brahms may find Ax's Brahms a bit staid, listeners who enjoy Arthur Rubinstein's smiling Brahms will find Ax's Brahms feels like coming home. Even better examples of Ax's way with Brahms are his recordings of the solo piano music. His Rhapsodies are superbly poised between restraint and recklessness; his Intermezzos are wonderfully inward but not unduly intimate; and his piano pieces are ideally balanced between hope and despair. While there are surely other Brahms' concerto recordings, one ought to hear as well -- the venerable Backhaus, Schnabel, Fischer, and Kempff recordings along with the more recent Arrau, Richter, Gilels, Pollini, Kovacevich, and Hamelin recordings -- fans of the Polish-American Ax who don't already know these performances from their previous releases will surely want to hear these recordings. Whether recorded by Sony or RCA, the sound of this reissue is uniformly clean and full. 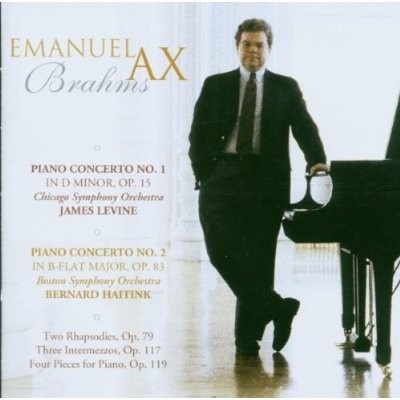