Erich Wolfgang Korngold was not so much a Hollywood film composer as a Viennese classical composer who happened to find himself exiled from his home for a decade during the Nazi era and World War II, and spent his time writing one or two scores a year for Warner Bros., then went back home after the war ended. That was also about the time that the soundtrack album began to come into vogue, so Korngold's work was not preserved on LPs. Conductor Charles Gerhardt and his National Philharmonic Orchestra, as part of their "Classic Film Scores" series, somewhat make up for that lack with this album, which contains excerpts -- in Hugo Friedhofer's original orchestrations -- from seven of Korngold's scores (representing about half his total output). These include highlights from the Academy Award-winning music for Anthony Adverse and the Academy Award-nominated music for The Private Lives of Elizabeth and Essex. Korngold's music was written for swashbuckling Errol Flynn features and historical dramas, which allowed him to use a lavish orchestral style that sometimes swamped the films themselves. (Anthony Adverse is a good example.) He is the epitome of a composer who imposes his own style on the films he scores, and is not at all subservient to them. The result is some powerful, original music more suggestive of the romantic classical style than anything else. Indeed, the music used for Deception is Korngold's Cello Concerto in C, Opus 37, and that gives a good sense of who's in charge here. Gerhardt and the orchestra effectively re-create the composer's heyday. 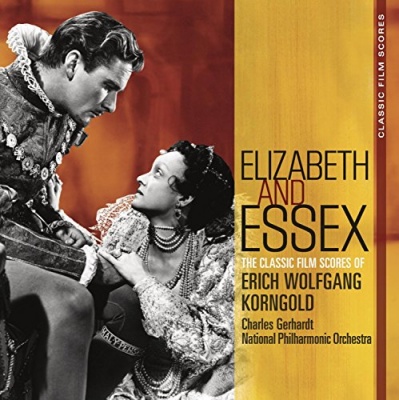