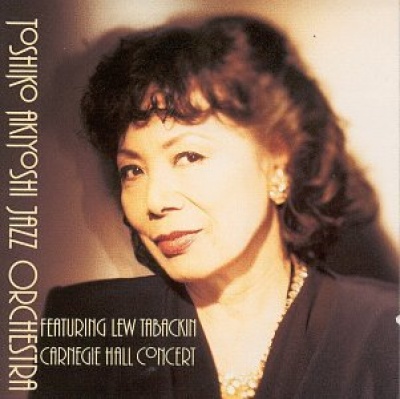 At the Office Dinner Ambiance

Toshiko Akiyoshi leads her big band in a 1991 Carnegie Hall concert that focuses mostly on her originals. Her husband, Lew Tabackin, contributes several potent solos on tenor sax and flute, while guest soloists include band alum Frank Wess (who is featured on his rich ballad "Your Beauty Is a Song of Love"), Freddie Hubbard (who is in great form on several numbers), and vocalist Nnenna Freelon (who was right at the start of her career, having recently been signed to Columbia), who is featured in the gospel-flavored "Prayer" movement of "Kourakan Suite." Akiyoshi also takes her turn in the solo spotlight, but really spends most of her time conducting her top-notch band. The program concludes with the snappy blues "How Do You Get to Carnegie Hall?," which features both Tabackin and Hubbard. This well-recorded concert will be of great interest to progressive jazz big-band aficionados.