Too Short was 33 when Can't Stay Away came out in 1999, and for a rapper, that's old age. Many MCs have seen their fortunes decline considerably by the time they hit 30, although Short managed to have more longevity than most of his peers. The Oakland rapper had claimed that 1996's Gettin' It would be his last album, but obviously, he wasn't ready to give up rapping just yet. You won't find anything groundbreaking on this CD -- Short continues to combine sexually explicit rhymes with a relaxed, laid-back style of rapping and melodic, sleek tracks that recall the funk and soul music of the '70s. Many hip-hop writers argued that his formula had long since grown tiresome, and to be sure, Short is cheating himself creatively by being so predictable and not trying something different. Nonetheless, he still comes up with some infectious, catchy grooves here and there, and there are times when his off-color humor is still fairly amusing -- "Invasion of the Flat Booty Bitches" and "More Freaky Tales" are definitely good for a few laughs. Much of the album finds Short featuring various rappers who were signed to his Too Short label; clearly, he was a smart enough businessman to reason that even if his own popularity faded, he could make money putting younger MCs to work. Can't Stay Away is far from Short's best album, but it has its moments -- and it's an album that many of his diehard fans will probably want despite its limitations and shortcomings. 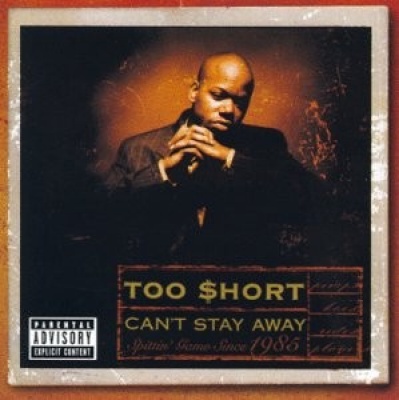