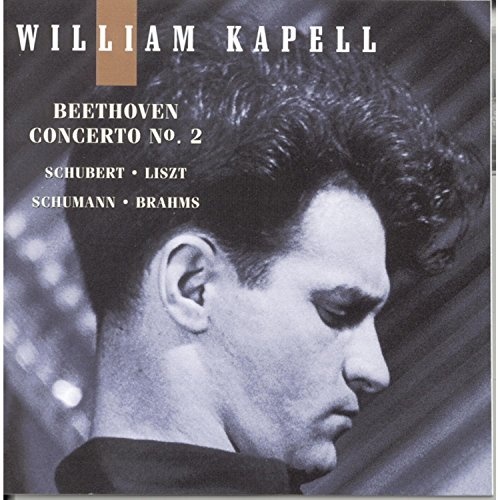 What's all the hubbub, bub? Why'd everybody seem to think that William Kapell was such hot stuff back there in the early '50s? Why'd everybody mourn his death at the age of 31 in 1953? Why did RCA honor Kapell the same way they honored Horowitz and Rubenstein by putting out a William Kapell edition? And was Kapell so bloody great that every single thing he ever recorded, no matter how small and how obscure, is included in the Kapell Edition?

Yep, Kapell was that bloody great. In this the fifth volume of the Kapell Edition, Kapell takes some of the most unlikely repertoire and makes it sound like just about the greatest music ever written for the piano. The disc opens with a Beethoven Concerto No. 2, which Kapell recorded with Vladimir Golschmann when he was 24. The young Kapell takes a piece that even Beethoven thought wasn't all that hot and plays it as if it's a masterpiece. With a performance of fire and passion, of control, and above all of blinding virtuosity, Kapell transforms the Concerto No. 2 into a masterpiece.

At least the concerto is a big work; the rest of the disc is filled with some of the smallest and slightest works ever written for the piano. There are ten dinky dances by Schubert, plus one impromptu; a short romance by Schumann; a tender little intermezzo by Brahms; and three super-duper virtuoso pieces by Liszt. Maybe the Liszt is the disc's pièce de résistance, and maybe Kapell's performances are of the transcendental variety of virtuosity but Kapell's interpretations of the Schubert dances are truly transcendental. He takes tiny little pieces and turns them into works of sublime genius and that's what's the hubbub, bub.