The Bartók concertos make for a challenging trio. The Second of the group is, along with the Prokofiev Second and Rachmaninov Third, the most difficult hurdle in the literature of piano/orchestral music. You don't venture onto this highway unless you're willing to drive through a gauntlet of pianistic nightmares. Yefim Bronfman smoothly negotiates every treacherous turn, every slippery curve with convincing skill. But it's not technique that reigns supreme in these concertos, it's cultivated musical insight.

Listen to his deft rendering of the Second's first movement cadenza (track one; 6:48); hear how he catches its menace, its Bartókian folkish impudence. And does anyone, with the possible exception of Anda/DG, impart a greater sense of foreboding and mystery to the second movement? Bronfman's account of the First Concerto, driven but not impetuous, brash but not fulsome, challenges the classic Serkin/Columbia (which Sony ought to reissue). He may actually surpass Serkin in the mechanical, percussion-laden second movement. Listen, for instance, to the ominous, brutal build-up (track eight; 3:03), where he manages, thanks in no small part to the adroit conducting of Esa-Pekka Salonen and to the Los Angeles Philharmonic's gifted percussion battery, to set the music on fire with an explosion of primordial sounds. Bronfman perfectly captures the repose and mellowed spirit of the Third Concerto, the product of a dying composer. I've not heard a version to surpass this one. Listen to his tender playing of the opening theme, or to his inspired enactment of the second movement, with its impassioned religiosity and hope in the face of death.

Bartók has been well served on records in these works. Kovacevich/Philips and Jando/Naxos are worthwhile alternatives, the former artist offering appropriate urgency and drive, the latter, a Hungarian, grasping the idiom of his countryman Bartók's concertos with knowing interpretive insight. Both these cycles, however, offer sonics not quite on the level of Sony's splendid 20-bit sound process, used here. And the Anda/DG and Serkin/Columbia First, while well-engineered for their time, are sonically left in the dust. 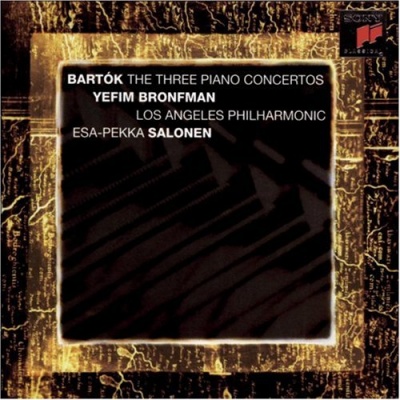