Samuel Barber’s Violin Concerto is well-suited to Hilary Hahn’s expressive range and technical proficiency. Perhaps it is also an ideal vehicle for her impressive musicality, which always overrides virtuosic flashiness. Hahn’s seriousness is matched by the work’s earnest style, and her intellectual grasp of the music is as strong as her emotional commitment to it. Hahn opens the neo-Romantic Allegro with a full sound, complemented by the artful writing for winds. Barber’s orchestration is transparent, leaving room for the solo violin to be distinctly heard at all times. The writing in the violin’s low register lets Hahn display her richest tone, though her higher passages are also beautifully colored. The Andante begins with a long oboe solo -- a clear nod to the Brahms Violin Concerto -- its plaintive tone setting the second movement’s darker mood. Hahn’s solo grows out of this opening material and arches above the brooding harmonies, almost rising to an elegiac level. The devilishly difficult Presto in moto is a perfect foil to the melancholy atmosphere of the previous two movements, and Hahn shows genuine skill in her crisp articulation of this scurrying finale. Hugh Wolff and the Saint Paul Chamber Orchestra provide a lush background, enhancing Hahn’s resonant performance. Through no failing of her own, Hahn's premiere recording of Edgar Meyer’s Violin Concerto is less than satisfying because her performance is stronger than the piece itself, which is at times banal and insufficiently developed to exploit the form’s dramatic potential. The simple melody of the introduction leads to, and ultimately frames, the faster material that follows. Hahn’s high, ringing arabesques and tricky runs, played against the shifting compound meters, are the most attractive features of the movement. Although the accompaniment is rhythmically active, and occasionally interesting, the orchestra never breaks out of its restricted background role. The second movement’s main theme evolves from a trite double-turn, which is passed around the orchestra several times before the soloist’s entrance. Hahn controls her double-voiced passages, carefully maintaining both lines without noticeably breaking. When the music picks up in pace and complexity, the change is welcome. Hahn, held back for too long, finally breaks loose with some colorful playing. The return to the opening material sets up a cadenza, more of a reverie than an overt display of technique. In this performance, Wolff and the orchestra give understated support, perhaps all that can be drawn from Meyer's score. 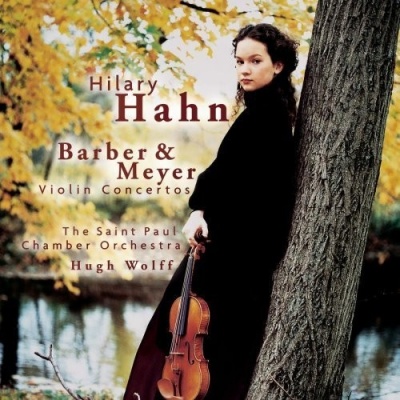