Released on separate CDs between 1998 and 2002, the selections in this triple-disc package represent the early concerto recordings Hilary Hahn made for Sony, which in turn established her reputation. Admirers who already own the original albums will find nothing new here, though Samuel Barber's Violin Concerto is now paired with Dmitry Shostakovich's Violin Concerto No. 1, and the Violin Concerto in D major of Ludwig van Beethoven is now coupled with Felix Mendelssohn's Violin Concerto in E minor, so the original programs have been trimmed of the Serenade by Leonard Bernstein and the Violin Concerto by Edgar Meyer. The award-winning album of concertos by Johannes Brahms and Igor Stravinsky hasn't been changed, so it appears to be the only one in the set that didn't give the compilers second thoughts. On the one hand, Hahn's playing has been extolled for an amazing virtuoso technique and for her seriousness of purpose, which she has consistently demonstrated throughout her career. On the other, these performances fall short of full expressiveness and dramatic power, lending credence to the idea that Hahn is a fairly cerebral musician with a perfectionist streak that keeps emotion in check. However, everyone agrees on Hahn's obvious precocity and risk-taking, which have been evident since she signed with Sony at the age of 16. These are all ambitious projects for artists of any age, and Hahn showed she was up to the challenges in each case. Listeners who are coming to Hahn for the first time should compare this set with some of her later albums to chart her artistic growth. 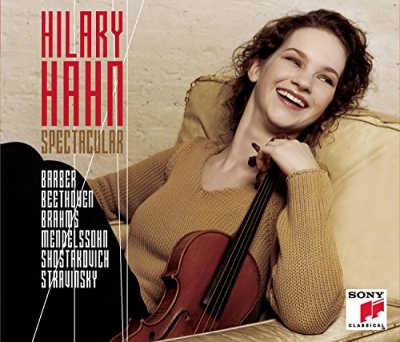