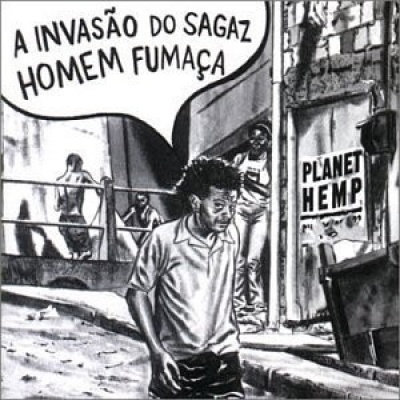 Whatever happened in the three years between Os Cães Ladram Mas a Caravana Não Pára and Planet Hemp's third album, the Rio hardcore/rap group return with a somewhat more measured, streamlined effort. There's just a bit less of everything, from variety in the material and cohesiveness in the jumps between styles to DJ vocal tradeoffs and bring-the-noise sonic collages. There's still plenty of fire and fury in the wah-wah guitar and over-the-top horns of "12 Com Dezolto" or the Led Zeppelin-esque riff-driving "Ex-quadrilha Da Fumaça." "Procedência C.D." and "HC3" thrash it out, but the effect isn't as overwhelming. The rap-over-acoustic-bottleneck-guitar "Four Track" serves as a brief intro to a good, straightforward quasi-surf instrumental, "Gorilla Grip." "Quem Tem Seda?" has a nice, restrained groove with background sax bleats, while "Stab" and "É Isso que Eu Tenho No Sangue..." lock down into mid-tempo favela funk-soul grooves that probably owe something to the '70s Brazilian soul power movement. "Quarta de Cinzas" goes back to flute-land on a mellow instrumental with gentle clavinet and soothing synth and the title track takes it out with an Afro-roots rap over conga that shifts to a solid roots reggae groove. It's hard to put your finger on exactly what's missing: maybe Planet Hemp is just better as a maximalist, over-the-top unit, or maybe it's a question of losing the surprise factor and not being able to spring sonic ambushes because almost all their moves and tricks are familiar now. But everything about Planet Hemp on O Invasão Do Sagaz Homem Fumaça just sounds a little bit less convincing.