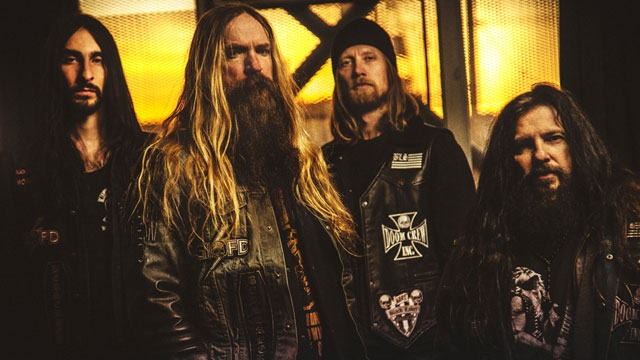 Twenty-some years ago, Zakk Wylde found himself at a crucial juncture. The guitarist could hit the road with Ozzy Osbourne, the man who gave his career its launching pad. He could kick around with what was left of a post-Slash Guns N' Roses. Or he could take a chance on himself.

With Ozzy needing a quick answer and GNR showing no real signs of life, Wylde took the third option. He enlisted a friend, drummer Phil Ondich, and headed to Miami with a head full of riffs and what was likely a massive alcohol budget. The result was Sonic Brew, with an approach more akin to his bludgeoning, pinch harmonic-happy work with Osbourne than his earlier Southern rock-influenced solo album, Book of Shadows. Sonic Brew marked the formation of a new band, Black Label Society, the music and aesthetic of which has kept Wylde going in between his subsequent turns with Osbourne.

To mark the record's two decades, Wylde and the current BLS lineup polished up the original recordings and revisited some of the songs from a different angle for a new edition of the LP, due out on May 17. An upcoming U.S. tour will celebrate the anniversary, with one night dedicated to the debut album and the next as more of a career-spanning set. The ever-busy Wylde currently finds himself in the midst of the Experience Hendrix tour, after which he'll hit the road with BLS and then return to Ozzy's ranks in the summer.

While en route to the Raleigh stop of Experience Hendrix, Wylde spoke with AllMusic about revisiting the Sonic Brew tunes, the cold turkey approach he took to reaching his sobriety (now in its tenth year), and the sense of humor that might seem at odds with his biker-bar presentation.

AllMusic: Obviously you're in a different place now than you were 20 years ago when you made 'Sonic Brew.' What about these songs still resonates with you?

Zakk Wylde: Every record I’ve ever made, I’ve never had a bad time. When Ozz would talk about certain records, he goes by not so much album sales, he goes by whether he had a good time making it. Back then it was just me in the studio doing what I love, and back then, getting hammered the whole time, having a blast.

When we made it, I was at a crossroads. I didn’t know if I wanted to be a singer/songwriter guy, with an acoustic like James Taylor. Ozzy had just done Ozzmosis, and I was playing with the GNR guys in between us recording the record. Then Ozz was like, “Can you get an answer from those guys? We’re getting ready to tour soon and I have to know what’s going on here so I’m not strapped looking for a guitar player.” Nothing was going on with GNR and I couldn’t get an answer, so Ozz said, “Listen, I just have to get another guitar player, I can’t wait around,” and I understood.

So I wasn’t playing with the boss, and the Guns N’ Roses thing, nothing was happening there, and I was like, “So what the fuck am I going to do, make another mellow record?” I had these riffs laying around and said, “I’ll just do it myself,” and that’s pretty much how Black Label was created. The first song I wrote was “Spoke in the Wheel,” just sitting around with an acoustic.

AllMusic: Were there things you'd been dying to fix on this new version of the album?

Wylde: No, it is what it is. Like when I listen to “No More Tears," the rhythm guitar is just one guitar, and usually I double everything, and [producer] John Purdell was like, “Just leave the one guitar,” and we started playing Madden football and just left it. There are certain things where I wish I’d done something different on a solo, but not really.

It’s almost like wallpaper, the original recording is in the background the whole time. The whole thing is just us adding to what already exists; at the end of the day, the only thing we wanted to do was beef it up a little more and fill it out and get rid of some of the high end. The only way to do that would be to layer on top of it, since we didn't have the original two-inch tapes.

But I didn’t want to re-record the album, it’s a snapshot in time, and that’s what happened then. Jeff [Fabb, Black Label Society drummer] came in and copied Phil’s drum parts verbatim, so this way we could bring the drums up and give them a little more TLC, and I played a lot of distorted bass on the original record, and JD [John DeServio, BLS bassist] plays more of a clean bass, doubling everything I played, and I’d double certain solos and things so you could bring them up in the mix.

AllMusic: You'd been singing for a while at that point, was that always something you wanted to do or was it more out of necessity?

Wylde: If we were doing a cover band back in the day and you could sing Jim Morrison really good, you’d do the Doors songs, and when it came to do the Sabbath stuff, I’d sing and do my Ozzy voice, and our other friend would do the Roger Daltrey voice.

I always dug singing, but I never thought about not playing guitar and being a frontman. Singing and playing guitar, like Clapton or Hendrix, doing both at the same time, I’ve always dug that. As time went on, I got more into writing lyrics, and now I like writing lyrics as much as I like writing guitar solos. It’s a little like homework, you sit down with the backing track and write a solo with a beginning, middle and an end, so it tells a story. I enjoy the whole process.

AllMusic: Did getting sober have a big impact on the way you tour?

Wylde: I’m not traumatized and don’t have any horror stories or anything like that. The only thing is tons of laughs and good times. For me, it only started getting in the way near the end of my drinking. Even if I didn’t get the blood clots, it was time to call it a day. “Zakk, do you want to go to rehab?” and I said, “Yeah, it’s real simple, Black Label rehab is one step, there is no 12 steps, it’s one, you just stop.”

You can be proud of yourself that you smashed it as opposed to letting something rule your life. People ask if it was a struggle, if I struggle every day, and I go, “No, is it a struggle every day getting up and practicing guitar or hitting the gym? No, you just do it." The dishes are in the sink, you clean them. If the garbage is full, you take it out. Make your bed. It’s normal shit, you just do it. That’s how I approach it.

AllMusic: You're on the road now with the Experience Hendrix tour. Are there conflicts over who gets to play something like "Purple Haze"?

Wylde: Father Dave [Mustaine] is out here, so Dave’s doing “Purple Haze.” Obviously that’s the “Stairway to Heaven,” the “Free Bird,” but Jimi has plenty of awesome tunes to do, so there’s no shortage on that. It’s no biggie.

AllMusic: What would you hope an Experience Zakk tour would look like?

AllMusic: So more of a buffet than a performance.

Wylde: Yeah, no one even performs, everyone just hangs out. There’s no music, they would say, “We’re going to celebrate Zakk, what’s the best way to do? Don’t play anything.” Just silence, it’s much better that way.

AllMusic: Have you always had a good sense of humor about yourself, or was there an era where you took things more seriously?

Wylde: Since high school, my memories are of us being a bunch of goofballs all the time. Now it’s the same shit, except I’m 52 years old. So it’s actually even stupider than it ever has been, because there’s more goofy shit going on, and you’ve got to laugh at it. It’s too easy to make fun of yourself, just do what comes naturally. All I have to do is look in the mirror and I start laughing. Fuck it, I’d rather be laughing than crying.

AllMusic: In that spirit, have you ever looked one of your kids in the eye and said "Your mama told you that you're not supposed to talk to strangers"?

Wylde: Yes, and then I just sang the song, the song by Ronnie James Dio, Saint Ronnie. Break into the riff and then we just start singing that one.

AllMusic: Do you have any insight into what's going on with the spoken dialogue in the middle of "No More Tears"? I've been wondering for 25 years.

Wylde: When you find out, let me know. [laughs]