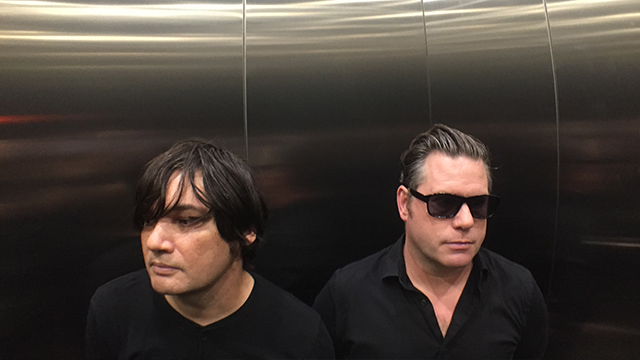 There's something satisfying about nice, round numbers, so it's convenient that X: The Godless Void and Other Stories, the tenth album by ...And You Will Know Us By the Trail of Dead, arrives in the band's 25th year. The Godless Void encapsulates the band's unique blend of punk energy, satisfying melodies, and dramatic grandeur in a way that effectively sums up its work to date, while also serving as a welcoming entry point for fresh ears hearing the band for the first time. Editor Heather Phares praised the album with a four-star review, noting that the band has "grown into their reflective side over the years, and they've rarely sounded as relatable, or affecting, as they do here," resulting in "triumphant proof that they're as passionate as ever."

The band's core duo of Conrad Keely and Jason Reece has survived all manner of record label jumps, lineup changes, and even Keely's lengthy relocation to Cambodia. The Godless Void marks the band's first new album in six years, and as Reece told us in a recent conversation, the pair knew exactly what the record should be. He also shared his thoughts on the various ways to use a crescendo, how the band knew it was time to take a break, and the perfect scenario for listening to his music.

AllMusic: When it's time to get started on a new album, do you and Conrad sit down beforehand and make sure you're on the same page musically?

Jason Reece: We were very particular about what we were going to do, and it took time to figure that out. We had a lot of time, which was good in one way, but you can also get lost. There was some point where we were jamming, and we recorded hours and hours of jams and song ideas, and then didn't use any of them. Which is kind of cool, you have to find what the direction is, and once that happened, it feels like you're going to have more of a point and more of a vision of how you want the album to sound in the end.

Reece: We're pretty verbal. We definitely talk about it, even to the point of being a little crazy about it. We were not at the point of relaxing and letting it happen, and we were being very critical, because we didn't want to repeat ourselves. Any band that's been around for a while, that's one of your main fears. Some bands embrace it, "This is our sound, this is what we do," but we're always trying to write something that we're interested in and find a way to make it sound fresh to us, and hopefully fresh to the people that like our band, so it doesn't sound like we're just going through the motions.

AllMusic: There is a sense even on those early albums that this wasn't a band that could be easily boxed in. Was that a conscious thing, to make it easier to explore other areas later on?

Reece: Our favorite bands were the ones that were more experimental and open-ended, they didn't necessarily fit into a certain genre. As people, we enjoy all kinds of music, so we weren't like, "We're going to be a hardcore band." The funny thing is, right now I have this hardcore band side project, and we're very aware of making hardcore punk rock songs, and we're following a criteria, whereas Trail of Dead is the opposite of that.

You can write something that will remind you of that in one way, but it can be anything. The opening track off this record is like an orchestral piece, so we've run the gamut. I think that's exciting, that makes things more unpredictable and you definitely want to have that in your life, or at least I do. It keeps things interesting.

AllMusic: You were doing some full-album shows before putting this record together. Are those rewarding for you creatively?

Reece: For us, we noticed that going back to those albums, they don't sound dated. So playing them live, it felt like there was a relevancy to them, and there's an energy that is really valid. So that added inspiration to completing the new one, because we'd take these breaks and go do these shows and come back and notice how you're looking back at your 22-year-old self and realizing that you're not embarrassed about the music.

AllMusic: Crescendos are a tool you use fairly often, even on a song like "Gone," which builds and builds but doesn't entirely boil over. What makes you decide to hold back sometimes?

Reece: We definitely wanted to have a certain climactic feel to it, but it definitely doesn't go over the edge as much. For me, I was thinking of a song Kate Bush did called "The Big Sky." It builds throughout the whole thing, with a new layer coming in every so often, and I was impressed by that. So when we were writing this song, we were trying to build these layers that would come in, and it adds a certain drama to it. It's one of those things that fits with the delivery of the lyrics, so as the lyrics get more and more intense, the music does, too. They're symbiotic, and it has this pensive tension to it that I like. It reminds me almost of Massive Attack, like something off of Mezzanine.

AllMusic: When Conrad first told you he was moving to Cambodia, how did you handle that news? Did it make sense to you?

Reece: We were at a point where it seemed like a good time to step back, and he was going to go hang out with his dad, who lives in Thailand, and I think he wanted to get his shit together. He was living in New York, and his life kind of got uprooted, and it's one of those places where it's cool to live there, but it's expensive and you have to have a good reason to live there. He loved Phnom Penh and how it's this rebellious, wild west, sort of chaotic city where anything goes. When you live in America, there's so much restriction and so many rules, it can be nice to live in a place where there's no rules.

AllMusic: Were you able to put the band to the side during that time, or is it always hanging over you?

Reece: I had two kids, and so to not think about the band was a nice thing to do. We were at a point where we had a management team that we didn't like, booking agents, and we just had to fire everybody. That was just a very freeing time, where we said "let's see how it all plays out," and then time went by, and Conrad eventually said, "I'm going to move back to Austin," and it seemed like a good time to get things going again. People were coming out of the woodwork who wanted to put out the record, new booking agents, so things were all coming together.

AllMusic: The record is a great entry point for getting into the band. Is that something you think about with each one, how accessible it will be?

Reece: For me, this record seems like any walk of life can relate to it. It's not a very alienating record, it wants to bring you in and take you on a road trip. We've always loved making records that were the kind of thing that you would throw on when you'd drive out to the country or whatever. I think that's an ideal setting to hear our music.

Adam Dubin Showcases the Camaraderie of the Bay Area Thrash Metal Scene in ' ...

Adam Dubin Showcases the Camaraderie of the Bay Area Thrash Metal Scene in ' ...