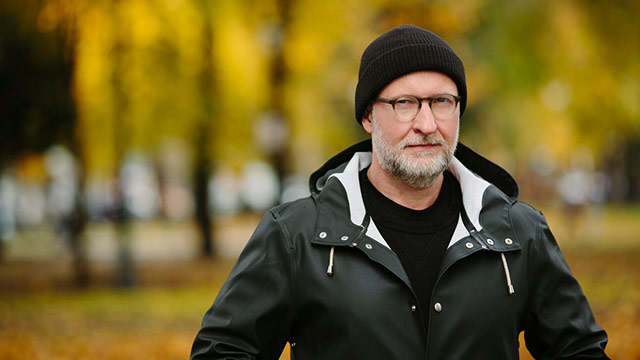 Bob Mould has been on a tear lately, releasing high quality albums at a rapid clip, including Silver Age, Beauty & Ruin, and last year's Patch the Sky, which made our Best Rock Albums of 2016 list. He's about to hit the road for a solo tour, armed with just his electric guitar, featuring his latest album, but also touching on his past in Hüsker Dü and Sugar.

Before packing his bags, Mould got on the phone with AllMusic to talk about his propensity for procrastination, how to perform songs that end with fade-outs, and what sort of satisfaction he still gets from playing his older material. The tour starts April 15 in Denver.

AllMusic: When you're gearing up for a solo tour, are you more likely to procrastinate on the preparations than you would with a full band?

Bob Mould: I’m pretty good at procrastinating about rehearsing no matter what configuration I’m in. The one thing that is easier is I don’t have to procrastinate at tour managers or anything, because I’m traveling by myself, so I’m a little more footloose and fancy free in terms of that. With the solo shows, if I go deeper into the catalog and look at songs that maybe aren’t suited to the band, necessarily, things that are more solo-centric, I have to go back and relearn things, touch songs I haven’t put my hands on in a while. So I think it’s about the same, but the band, we barely rehearse as it is.

AllMusic: Are you able to add in different songs on a whim or do you like to have them more nailed down?

Mould: I’d rather have a list on deck before I leave the house. Having said that, sometimes people will chime in during those rare quiet moments at the shows, and someone will blurt out a title that I haven’t thought of in 20 years and I’ll go, “Oh, I wonder if I can remember that, what key was that in, how did the second bridge go?” and if I can pull that off, I’m usually good.

AllMusic: Are you generally not much of a "fly by the seat of your pants" guy?

Mould: It depends on what I’m getting ready to do, if it’s making a record, definitely not, every detail that I can think of ahead of time is usually thought of. I’ll go into sessions with a pretty strong idea of what each song should be like. As far as tours, you check in with the band, with the other guys to see if there are any old tracks we haven’t touched that they’d like to try. As far as solo shows, I went back and listened to some older songs, some stuff from the 2000s, all the solo records in that stretch, those are things I haven’t looked at in quite a while.

AllMusic: Do you still leave room for happy accidents?

Mould: Always. You always leave room for what other people bring to the song, but as far as structure, arrangement, tempo, key, ideas of where it might reside on a record, all that stuff is part of the writing process that leads up to making a record.

AllMusic: There's a video I love of Brian Wilson playing "Good Vibrations" solo on SNL, and when he gets to the end, he does a kind of live manual fade-out, and I was never sure if he planned that beforehand or made it up in the moment. When you play a song live that has a fade-out on the record, what's your strategy?

This isn't quite the same thing, but you reminded me of how I was listening to a 60s group called the Tea Company, one of those entirely paisley covers with some rolling papers on it, that kind of thing, and they had a 10-minute song, and the structure was there for two and a half minutes, and then it broke into clearly the improv section, and there were some really good moments, and then it started to fall apart, and all of the sudden this crossfade happened, and it was this acoustic version of the song, then it came back to this loud version, and I’m thinking, “I bet that’s the part where the jam fell completely apart, and they had to crossfade something in later,” to take out the nine minutes where somebody wasn’t playing so well.

AllMusic: When you play without a drummer, do your tempos tend to wander?

Mould: That usually happens anyways, songs tend to escalate in the live setting, especially with the band, and maybe a little less in the acoustic setting. When you hit the first chorus, it picks up a little bit, no matter what.

AllMusic: With a song like "Hold On" from Patch the Sky, the band is pretty important in helping the song pick up steam as it goes. When it's just you, do you have tricks to pick up that slack?

Mould: That song started probably 20 bpms slower than we recorded it, the original home recording was way slower than the album. I only started breaking that song out in September 2015, where I went out and played my works in progress shows, where I played most of Patch the Sky with just me and a guitar.

I just have to hold down the fort in the low end and make something happen, either with the voice or some extra percussive effects with the guitar. It’s a little less dynamic with just one person, but I always try to find something special to put in there by the end of the song.

AllMusic: You were never a guy who wore a uniform or had a gimmick onstage, which I imagine is nice as you get older, since you aren't expected to recreate some look from your twenties.

Mould: I do have stage clothes, which are not unlike the clothes I normally wear, believe it or not. It’s just the practicality of I’d rather trash the same shirt over a year than trash all of my shirts a little bit over the course of a year.

The funniest thing I can think of that speaks to this is in 1990 or so, I was 29 going on 30 when Black Sheets came out, and the publicist at Virgin, a great publicist, I really liked working with her, but I did all my press photos and they came back and she said, “We should really consider touching this up.” I was still smoking cigarettes then, and drinking a lot of coffee, so I had a little bit of raccoon going on under the eyes, and the start of aging, and I was like, “You want to do what?” “We could just touch it up a little bit,” and I said, “Yeah, let’s do that, and then two years from now, we’ll touch it up some more, and again in five years, and then at some point we won’t be able to touch it up and I’ll age 40 years all at once. I don’t think so.” I earned this look.

AllMusic: Do you enjoy tinkering with pedals and effects these days, or are you more of a "plug me in and let's go" kind of guitarist?

Mould: I go back and forth. I’m pretty much a meat and potatoes guy, I don’t like getting tangled up with a lot of extra effects if I can help it, especially live, because playing a three-piece and especially playing solo, it gets to be a distraction. The way that I approach stage performance and bringing songs to people live, there’s not a lot of, “Let me lean over and get my MIDI board figured out and make sure the timing on this effect is just right before we start,” that’s not my thing. But when I’m at home and if I’m just playing and practicing or looking for new sounds, maybe I’ll try out different effects or compressors or distortion boxes, but generally, not onstage. A little bit at home, but compared to most guitarists, definitely not, it’s not my big thing.

AllMusic: What's the longest you can go without playing?

Mould: I can definitely put it away for a while. It feels like I play every day, but there’s been stretches of weeks where I haven’t picked up a guitar, and it’s good. I listen to music every day, I look at art every day, I’m taking notes every day, but maybe not playing guitar every single day.

AllMusic: Do you still get anything out of playing the old songs, or is that just an understood part of the job?

Mould: The main consideration is, can I remember all the turns so that it doesn’t sound like a wreck when I try it? That’s more on the spontaneous tip. If somebody says, “Let’s play ‘Beyond the Threshold’ off of Zen Arcade solo,” I say, “I don’t know if I could play that song at all, even with a band, anymore.” Some things were just a blur the first time and I don’t even know what I did. Someone says, “Can you play ‘Whichever Way the Wind Blows’?” off of Workbook or something and I go, “Give me a minute, let me see if I can remember the words. Yeah, that would be a lot of fun.” Emotionally, that one still resonates with me, therefore it should resonate with people when I play it. So part of it’s like a gymnast, what’s the difficulty level of landing that dismount? Am I going to throw myself in the air, but not know how I’m going to land?

AllMusic: And that's not a kind of danger you find exciting?

Mould: I don’t know how good it looks, let’s put it that way. It’s the kind of thing where I loved the Replacements, but…you know.

AllMusic: You spent some time in the pro wrestling world, which has its own carny vocabulary. Have any of those terms snuck into your vernacular?

Mould: It’s funny, like in our business, when you say something gets a bump, it gets lifted up, but in the wrestling business, something takes a bump, it’s going down. That one doesn’t make sense. In Husker Du, we had a kayfabe thing [kayfabe is maintaining the illusion of the wrestling world when outsiders are present], we used Chuck Berry as a kayfabe, like how the boys use kayfabe in wrestling. If someone comes in the dressing room and you don’t know them, they’re just eavesdropping, you bring up Chuck Berry. It’s the same kind of thing.