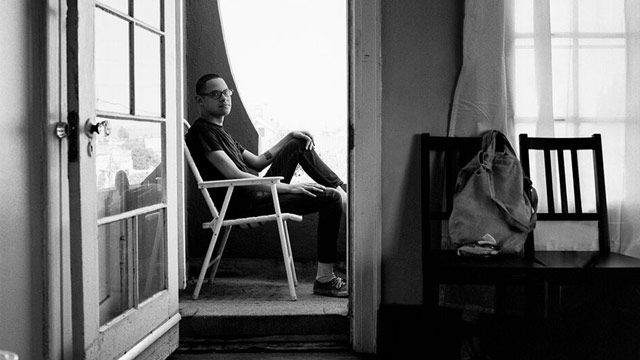 On his 2013 album, Dissed and Dismissed, West Bay native Tony Molina announced himself and his style of incredibly concise, hyper-melodic, guitar-driven pop. Building on the sound of his band Ovens, that album placed his gentle, layered vocals alongside heavily-overdriven guitars, which he eschewed on 2016's acoustic Confront the Truth, giving the sense that he was prepared to follow his muse anywhere.

His new album, Kill the Lights, finds him exploring jangly 12-string guitars and adding baroque pop flourishes that come naturally from the self-professed Love fan, landing not quite between the sound of the two albums but in another place altogether. Molina spoke with us about his melody-over-all mentality, why his song aren't autobiographical, and why most of his songs are under 90 seconds long.

AllMusic: The first two albums were pretty different from each other. Did you feel pressured to take another left turn this time?

Tony Molina: We were just doing demos of songs I had, just for fun, and the demos sounded decent so we decided, “Maybe these demos could be an album,” and we just finished it. Once we were over halfway done recording, we decided to do more, and then we had an album. It was kind of accidental.

AllMusic: When you went from those demos to these final versions on the album, did you know what sort of instrumental layers you were going to add?

Molina: Usually when we demo stuff, we’re working on a cassette eight-track, so there’s only so many tracks, and I’m really into layering stuff, putting four rhythm guitars on a thing. So once we made some basic demos we were like, “OK, let’s just add another guitar to this, a 12-string to this,” as we went along.

AllMusic: You've said in regards to your earlier albums that you weren't confident about singing. Has it gotten easier for you?

Molina: It’s still stressful and I still am harshly critical of everything I do. It’s a lot easier currently, because Jasper [Leach] helps me record, I have my friends play on my records, so I think just having them around and their support, they can keep me out of that headspace a bit, so it’s a lot easier and I can be more confident to actually follow through with finishing a recording. If it’s by myself, I’ll say, “Oh, this isn’t good enough,” and I’ll either not finish it or finish it and not play it for anybody. That’s where my mind just goes.

AllMusic: Do you set rules for yourself to keep the songs so succinct?

Molina: Once I’m recording it and it feels right, then I say, “OK, cool, it’s done, now I don’t have to think about it ever again.”

AllMusic: The song "Now That She's Gone" ends with this two-guitar harmony part that seems like other bands would have dragged out longer, but you fade it out pretty quickly.

Molina: It’s faded out on the riff, there were only a couple more seconds of that song anyway. It would have only added a few seconds to the song, and I just didn’t feel like it.

AllMusic: You come from the hardcore scene, where the songs are often even shorter than the ones you're doing here. This is almost prog in comparison.

Molina: I think naturally I’m writing longer songs now, I’m working on a new record and the songs seem to be pretty solidly at the two-minute mark. It wasn’t intentional for me to do that, I’m just naturally getting to a point where I’m doing that now.

AllMusic: Do you enjoy writing lyrics?

Molina: I hate it. I don’t even really write them. When I write songs, I’m focused on melody and instrumentation, that’s all I’m thinking about. When it comes to writing words, I do something really quick, last minute, I jot something down real quick when I’m about to do a vocal take for the song. I don’t think about lyrics that often, I don’t care about them.

AllMusic: Do you care about other bands' lyrics?

Molina: I think the older I get the more I appreciate lyrics. But what I’m mostly drawn to is melody and instrumentation. When lyrics are good, it’s great, but it’s never been my main focus, it’s always been an afterthought. The Reigning Sound is a band I’ve loved for a long time, and I always really liked that guy’s lyrics. Thin Lizzy could write some really great lyrics. You listen to Gene Clark, No Other, the lyrics on there are pretty insane, you can’t help but get into it.

Molina: No, I don’t write songs about my personal life or anything like that. Mostly I don’t. It’s really uncomfortable to do, so I’ve never even really attempted it that much, it’s much easier to come up with some simple thing that doesn’t apply to me and make that the song. Sometimes when I look back on stuff like that, I think, “All these songs are about a breakup,” but I’m not going through a breakup, I’m not losing people, my life is pretty good. I’m not writing songs about myself or my relationships with people.

I really like Sharon Van Etten, and I was reading an interview with her, and all of her stuff is so wildly personal, she just puts all of her shit out there, and it’s this cathartic thing for her, so she’s really writing about her shit. That blew my mind, because that seems so uncomfortable, I could never do that. I couldn’t do it. I don’t really think I have anything to say, so I just write stuff that’s easy to put the words together. It’s more whatever words work over the melody is the deal for me. It’s really easy, I don’t spend any time on lyrics, ever.

AllMusic: You've said that Metallica is your favorite band, do you have a favorite deep cut?

Molina: My favorite Metallica song of all time is “To Live is To Die,” that’s my all-time favorite. That song is killer. I just love the melody in the middle, it gets crazy. I always thought that ...And Justice For All was James Hetfield’s first and only solo album he ever made. That’s why it’s my favorite one. I don’t think it’s the best one, but I think it’s my favorite one. I think the best one is Ride the Lightning.