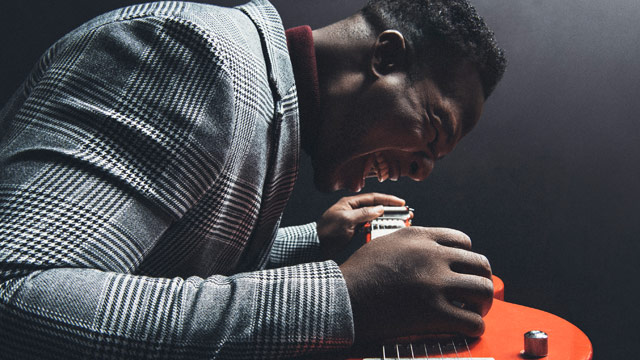 Robert Randolph & the Family Band's history with the Grammy Awards goes back all the way to the band's 2003 debut studio LP, Unclassified, which snagged two nominations for Best Rock Gospel Album and Best Rock Instrumental Performance. The band has pulled down three more nominations in the following years, including one for 2017's Got Soul under Best Contemporary Blues Album. The New Jersey-born Randolph says he's hoping for a little hometown magic to push the band into the winners' category this Sunday, as the ceremony returns to New York City after 15 years in Los Angeles.

As the big night looms, Randolph spoke with AllMusic about if it's bad form to write a thank-you list in advance, his experience performing on the 2004 telecast, and his love of arguing with strangers about basketball on Twitter.

AllMusic: Are you excited that the Grammys are in your neighborhood this year?

Robert Randolph: Yeah, you get to sleep in your bed, whenever that is, but in New York, everything goes later. So it’ll be fun, I’m excited about it. Hopefully we can win one. We haven’t snatched one yet, but hopefully being in New York, it will give me some good looks, being home.

It’s always fun to go, it’s exciting to see all of the bands and all of the different artists that we all listen to, everybody’s there. So it’s always fun, I always enjoy going. You can never really get tired of it, just to go for a day or two, because there’s so much going on, and with the record business changing so much, you need to see so many new people, new producers, new artists, new engineers, and that’s what’s cool about the Grammys. So it’s a way to get a good deal, you can talk to one of the great collaborators, great artists, and say, “Hey, let’s work together next year.”

AllMusic: Have they ever sat you next to someone you didn't expect?

Randolph: Yeah, one year they sat me next to Alicia Keys and Pharrell and all those guys, and I wound up becoming friends with them and talking to them after that. So that’s always cool about the Grammys, you’ll be sitting next to so many people, everybody’s around, you see people all day long and get in conversations, so that’s fun.

AllMusic: Do you know who it will be beforehand?

Randolph: It’s always a first day of school sort of surprise, you don’t know until you get there, and they’ll have your picture or your name on the seat, so you can go, “Wow, I’m sitting next to Cardi B!” It’s always fun, that’s what’s really exciting about it. Hopefully they give you some camera time and all those things.

The first time, when I went and we performed, we were doing the rehearsals, we were doing a big funk tribute, and we were waiting for Prince to finish his rehearsal, and so everybody was standing around, and everyone was in there, from Beyoncé to Prince to George Clinton to Outkast, everybody, and then Prince just came over to me and started talking to me, and I couldn’t believe it. I was like, “Uhh…hey, man, OK…” And he was like, “Hey, I’m a big fan, I listen to your stuff, you’re really great, keep doing what you’re doing,” and I was like, “Wow, OK.” So there you go. It didn’t really hit me until hours later, I was in shock. You just don’t know what to say.

AllMusic: Are you superstitious about writing a thank-you list beforehand?

I see it happen every year, I won’t tell you who the band is, but one of the guys forgot to mention his wife, and the wife left the party. I’ve seen another band forget to thank the head of the label, and the next two records didn’t do a damn thing. It’s no joke out there, you’d better thank the right people, you’d better get a list, you’d better write it down, and you’d better read off the list as fast as you can.

AllMusic: You sit down while you play; do you require a specific chair or can it be anything?

Randolph: It’s got to be an old grandma wooden chair. It has to be sturdy, because I do all kind of jumping around. People have tried to bring me floppy chairs, and I’ve fell. There was a time when I was playing with Dave Matthews Band and they were like, “You’re just sitting in for one song, you’ll be fine, use this plastic chair,” like you’d sit in at a party, a white plastic chair, and the next thing I know, I’m jumping around, and I went to sit down, and this thing crashed, in front of everyone in Charlottesville, Virginia. I completely fell right on my butt. So it has to be sturdy.

Everybody sort of knows now, it better be a sturdy chair. When I fell last week, it was my own chair, I just happened to jump around and miss the chair coming back down. But I played it off good, and hopefully somebody got some good video, because it was kind of funny. It’s a good rock and roll moment.

AllMusic: Do you keep some spares in the truck, just in case, or is it on your rider?

Randolph: It’ll be on the rider, but if we are flying in to play a festival somewhere, a one-off or a weekend show when we don’t have our tour equipment, they’ll have to go search for a chair, and they usually have to go search at old restaurants. “No, we need a heavy duty old wooden chair, no plastic, no arms, we need one of the chairs that’s sitting in grandma’s house.”

AllMusic: The first time I saw you was at Eric Clapton's Crossroads Festival in 2004, where your energy definitely stood out in a lineup of mostly old white dudes onstage. Was that big moment for the band?

Randolph: Yeah, that was definitely a big turning point for me and the band. Because I’m playing a pedal steel slide guitar, many people will see it on TV real quick and people aren’t sure what it is, and even some of the hardcore guitar fans are like, “What’s going on there?” That was the moment where all the legendary guitar players were in one place, so that was my in to that whole world of all these people. All of the artists knew, but the fans were like, “Wow, yeah, it does fit in with this blues and rock guitar.” People still talk about it, people will come to our shows for the first time who say, “Hey, we saw you on that Eric Clapton DVD.”

AllMusic: You seem to enjoy scrapping about basketball on Twitter. What do you get out of it?

Randolph: I always love to debate music and sports, because no matter how great, how bad, how anything, there’s always somebody who’s willing to disagree, and it always goes to the next level. Arguing about sports and music never ends. I’m from Jersey, and if you walk into any bar, it’s going to be 50/50 of who’s better, Bon Jovi or Bruce Springsteen. No matter what, you’re never going to get 100 percent of the people saying, “I love Bruce Springsteen!” or “I love Bon Jovi!” It’s usually 60/40 Springsteen, and no one ever says, “I love both!” It’s like, who do you like better, the Beatles or Led Zeppelin, and it just goes on forever. “Screw you, man, the Beatles are way better!” Or one guy in the back who says, “The Spin Doctors!”

AllMusic: Which fires you up more, arguing about music or about sports?

Randolph: Both do. But I’m a musician, so I always like to argue with sports people. A lot of people know I’m friends with a bunch of the owners, so they think I can’t say what I want to say and are like, “Oh, be quiet, you just kiss up to the owners!” I was like, “Listen, I argue with the owners, too.”

AllMusic: Speaking of owners, can you give an honest assessment of [New York Knicks owner] James Dolan's guitar playing?

Randolph: You know what, he’s gotten so much better. His band is really great, he’s got an A-1 band, and he can write a song just as fast as anybody.

AllMusic: Do you think they'll make the playoffs this year?

Randolph: They probably won’t make the playoffs, but everyone’s excited that we finally have a young team with good young players. We haven’t had good young players in 30 years, since 1985 when they drafted Patrick Ewing, and Mark Jackson the next year, that was the last time we had two rookies that we’d drafted that were good. All those guys are young, we have to watch them grow, so it’s going to be fun.