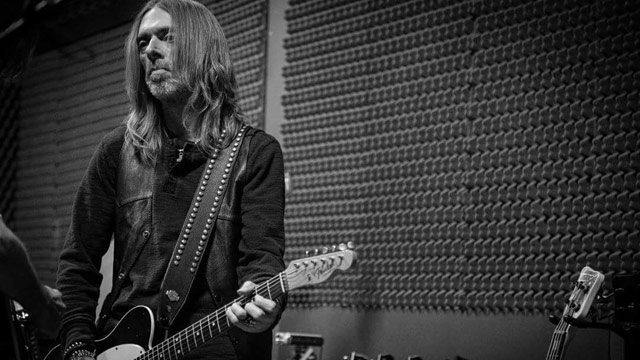 "I toted the old metal flag for fuckin’ 25 years, and it got a little bit heavy," says former Pantera and Down bassist Rex Brown. "I wanted to lighten the load a little bit." After holding down the low end for two of metal's heaviest bands, which was followed by health struggles and the murder of his former Pantera bandmate, guitarist "Dimebag" Darrell Abbott, Brown eventually decided clear the table and start over, teaming up with Nashville-based guitarist and songwriter Lance Harvill on the songs that make up Brown's solo debut, Smoke On This...

And while the guitars are often distorted, grooving alongside Brown's gravelly voice, he's right: a metal record this ain't. The influences that shine through strongest are from the 70s album rock of his childhood in rural Texas, with a dash Summer of Love psychedelia for good measure. With the record now in stores and touring on the near horizon, Brown spoke with us about moving on from his best-known bands, making a modern album with proudly retro influences, pinching a crucial guitar chord from his daughter.

AllMusic: It might be something of a blessing that this album is coming out now; if it had come out in 2003, people would have only compared it to Pantera, but now there's some distance.

Rex Brown: After Dime got shot, I was in a bad state for a couple of years. He was a huge part of my life since I was growing up, and for that to happen…I immersed myself in nothing but work, I did the Down thing for another six years, which was great, and then I moved on, and I was writing with Lance, who I’d known forever, and I’ll help him out with songs, and that’s how this started. We thought we were just going to make demos, but they started sounding too good, and once I found my voice, that’s when we said, “OK, now we’re hearing this, this is the sound I’ve been having in my head.” I wanted this to be a personal journey for me. It’s just about living life now, there’s much more to life than putting a record out or trying to make money, but I still have this rock and roll blood in me that oozes out every other second.

AllMusic: Are you the kind of writer who writes a song A to Z or puts together snippets?

Brown: It depends, I have a ton of lyric sheets sitting in this one bag that’s just stuffed full, but I can also wake up at three in the morning and take the guitar into a part of my house where I record, and whatever comes to mind first, my gut instinct, sometimes it’s shit and sometimes it’s workable, and I’ve done that forever. I’m one of those cats who says you’re only as good as your last gig, you’re only as good as the last song you did. It’s just part of my chemistry that hasn’t shaken off yet, and I don’t expect it to.

AllMusic: "Get Yourself Alright" might surprise people with its psychedelic edge.

Brown: That was meant to be like a Beatle-esque kind of stacked harmony with a flange effect on the vocal. And “Fault Line” was a song that Lance had where I changed just a couple of things. I said, “Let me sing on that,” and I listened back and I hated it. The second time, it still wasn’t right yet. Then by the sixth or seventh pass, it started sounding really good, so we took that song, which has a bunch of acoustic and lap steel on it, and with the piano, it was one of those things where it fell together really nicely. Once I had that voice, there we were.

AllMusic: Would you use other bands as frames of reference in the studio when it came to getting a sound you wanted?

Brown: For sure. I’m a child of the seventies, I grew up in the seventies listening to rock and roll. Back then, it was just music, there weren’t these genres and subgenres, and I just wanted to get back to the spirit of playing music and having fun, and at the same time, it was a very concerted effort that if you’re going to do this, you’d better give it 110 percent, and I had these guys coming in who didn’t know which way we were going to go that day. We’d start with the guitar and get to the vocals, and usually I like doing those later in the day once my voice gets going.

At the start, we were putting a bunch of effects on the vocals, because I’m just not hearing it yet, I have to get used to it. That’s why I would take time in between, to get used to my voice, and once we did define it, at the end of the mix I said, “Take everything off of it, strip it raw, make it real, make it honest.” That’s what these lyrics are about, what these songs are about, just go back to the old seventies way of looking at a record and make it honest. That’s all I could do.

AllMusic: "One of These Days" stands out, especially with the a cappella vocal part at the end.

Brown: We had orchestration in the back of that originally, and my producer goes, “I want to strip it back and just play it for you and see what you think,” and sent it back and I listened to it and I said, “If we’re going to get real on this, then this is about as real as you can get.” Caleb said, “Think about what you’re singing about,” and he played me this Scott Joplin thing. My grandmother used to play piano at the silent movies back in the day, and some of my fondest memories as a kid were of taking her hand and making her play Scott Joplin. Caleb hit one note that reminded me of those days, and we captured that on tape.

Lance had sent me that one little passage, and I built the whole song around it. I wanted it to be kind of an anthem, kind of a credo going out, and my daughter gave me the last chord. She’s 17 and plays guitar, and we were on Facetime and she played this one chord and I said, “What is that?” So I ripped my daughter off. She showed me and I said, “That would work perfectly, that was the one in my head I was looking for."

AllMusic: Is this the most free you've felt to be yourself musically?

Brown: It was one of those things where after touring for 25, 30 years, album, tour, album, tour, I was sitting on the back of the bus and I said, “I’m burnt, I’m taking off two years,” and I didn’t take but maybe eight months before I started working. That’s just how my blood works. Lance and I came across some magical tunes together, and I couldn’t be prouder of what we’ve done.

I’m not trying to go retro, I don’t think this record sounds retro, even though my influences are definitely retro. My playlists are retro. There was some great music that came out in the seventies that’s been kind of overlooked, and people don’t know where some of this stuff comes from. I do my homework, I know where every emotion and every feel of this thing is.

AllMusic: What's an overlooked 70s record you'd like to shout out?

Brown: There was a record that came out in 2013, it’s Humble Pie’s Live at the Fillmore, remixed and remastered, and you can hear a pin drop at the Fillmore back in 1971. Steve Marriott, his vocals are just exceptional. If people don’t know that record, then they don’t know what rock and roll is. Or Foghat, there’s deep cuts from those guys. Savoy Brown. Bloodrock. And I was a big Eagles fan.

AllMusic: After performing the songs live, did you find anything that surprised you about them?

Brown: Oh yeah. I was keeping it all very guarded, but I was finally sharing it, saying, “What do you think of this?” They were saying, “This is pretty good,” but I wouldn’t listen to them, I’m my own worst critic. My daughter is a huge music fan, and she wanted to learn some songs by Pierce the Veil and those type of bands, and I said, “Honey, I’m going to buy you a record player and a shitload of records,” like Carole King’s Tapestry, and I said, “Go learn how to play some of these songs so you know where the lineage is, where these guys might have got some of these songs, then you can graduate into the early punk and…” She’s one of my biggest critics when it comes to songs, she’s heard everything since she was a child, from Kill Devil Hill stuff to now, and Down stuff, so she’d been around a musical environment with me for a long while, and she’s a good guitar player.

AllMusic: I'm sure it's been exciting to watch her develop as a player.

Brown: It’s amazing, we’ll sit down with acoustics and just play together, and I’ll go, “Wow, you’ve gotten so good.” The whole thing is trying to get her to slow down a little bit. I think she gets a little intimidated when she’s around me and tries to play everything real fast, and I say, “Honey, play at this tempo,” and I’ll tap out a beat and we’ll start playing, and it’s just so cool. I played her the song “Grace” and said, “What do you think of this?” and she said, “It’s probably my favorite song on the record,” and that’s why I threw it on there, for her. It’s also Anselmo’s. Phil likes that track, of all things.