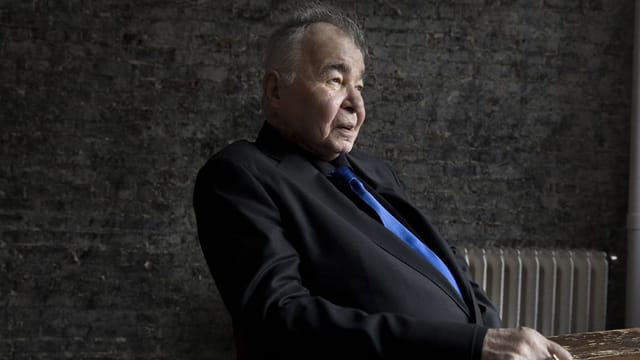 On March 26, Bob Dylan popped back into the zeitgeist, as he has a habit of doing, when he released his first new song since his 2012 album Tempest. The song, "Murder Most Foul," was a grand-scale meditation on American culture and malaise as filtered through Dylan's memories of the assassination of John F. Kennedy. As more than one scribe pointed out, it was the longest song Dylan has released to date, running just under 17 minutes, beating out "Highlands" on 1997's Time Out Of Mind by all of 28 seconds. While much was made of the song's long, rambling narrative, truly Dylanesque wordplay, and frequent allusions to other songs, it was considered significant that it was an epic, and therefore a Major Statement. In the minds of many, when it comes to art, size matters -- the giant oil painting means more than the simple pencil sketch, a novel is a more important accomplishment than a short story, the double album is more likely to be a defining work than an EP. Big themes and grand execution are the signs of the sort of ambition that separates the true artist from the mere craftsman.

If ever there was an artist who proved how flawed that thinking is, it was John Prine. Prine was a songwriter whose work told the stories of ordinary people and the often relatable events of their lives in comfortable, compact form, with a simplicity that belied the strength of his craft. Prine had a remarkable gift for writing lyrics that told familiar stories in a way you hadn't heard before, avoiding cliches while spinning tales that had the ring of truth even when they began to grow tall. Prine's songs were often witty, but rarely at the expense of his characters, and the bad luck that sometimes made itself known was buffered by a compassion that was never sugary.

The decidedly unremarkable lovers in "Donald and Lydia" are lonely people who have little going for them other than one another (but maybe that's enough). The great revelation passed along to some guy at a topless bar in "Spanish Pipedream" is essentially to get away from it all, live simply, and eat more fresh fruit. The lonely old man in "Hello In There" isn't asking for anything other than to just be acknowledged, and the crushing sadness of "Sam Stone"'s tale of a drug-addicted Vietnam veteran could break your heart without making a fuss (and as young people continue to fight endless wars overseas and opioid addiction claims more lives every day, it's unfortunately as relevant today as the day it was written).

As Prine tells it, even the Son of God had trouble with his wife, drank a few beers on occasion, liked James Dean movies, and got to open for George Jones once, each of them the events of the life of a fairly regular guy shared with a grin that never descended into a smirk. And the dry, Midwestern twang of his voice spoke with the clarity of the guy down the street who somehow knows how to make a story come to life. Jesus and auto mechanics are just folks trying to live their lives in John Prine's world, and he found a simple beauty in that that never failed him in a career that stretched close to fifty years before he died on April 7 due to complications from the COVID-19 virus.

Of course, it's worth noting that Bob Dylan, who surely knows good songwriting when he hears it, was a John Prine fan (in 2009 he said, "Prine's stuff is pure Proustian existentialism, Midwestern mind trips to the nth degree"), as were plenty of other tunesmith and musicians of note. His songs were covered by Johnny Cash, Bette Midler, Paul Westerberg, Bonnie Raitt, Swamp Dogg, Randy Travis, John Denver, Miranda Lambert, and Carl Perkins, among dozens of others, and it was Kris Kristofferson who gave Prine the break that led to his first record deal.

Born on October 10, 1946, Prine's parents were originally from Muhlenberg County, Kentucky, and their stories inspired one of Prine's best known songs, "Paradise." Prine was born and raised in Maywood, Illinois, a suburb 11 miles from Chicago, and his grandfather was a part-time musician who once gigged with the great Merle Travis. When Prine was 14, he began learning to play guitar from his older brother David, and he started writing songs, though he didn't consider making music his career until he returned home after a two-year stretch in the Army (while he served during the Vietnam war, it was Prine's good fortune to spend most of his hitch in Germany). After a couple years working as a mailman, Prine decided he wanted to take a shot at becoming a musician, and by October 1970, he was regularly playing at a handful of Chicago folk clubs when Roger Ebert, film critic for the Chicago Sun-Times and years away from becoming famous for his thumb of judgment, stopped in at a bar called the Fifth Peg for a beer and heard Prine in action. Ebert became an instant fan and wrote a profile on him for the Sun-Times that gave him his first significant attention from the press.

Not long after, Steve Goodman, a fellow Chicago-based singer and songwriter who was one of Prine's best friends, was opening a four night stand for Kris Kristofferson at a Chicago club called the Quiet Knight. Kristofferson liked Goodman's songs and, after a great deal of convincing, grudgingly agreed to head across town with him to see his friend Prine perform. Though the bar was closing, Prine played seven songs for Kristofferson, and after he was done, Kris asked him to play them again. (Kristofferson would later say, "John Prine is so good, we may have to break his thumbs.")

When Goodman and Prine took a trip to New York City four months later, they dropped in to see Kristofferson play at the Bitter End, and Kris remembered the songwriters, allowing them to come up on stage and sing three songs each. Prine sang "Paradise," "Sam Stone," and "Hello In There," and Jerry Wexler, the producer and A&R man who helped make Atlantic Records one of America's most successful and influential labels, was in the audience and asked to meet Prine the next morning. Wexler signed Prine to Atlantic, and his self-titled debut album came out in June 1971.

If Prine's life story had been a movie, this would have been the point where he became a major star overnight, but instead things played out more like a John Prine song -- critics loved the album, and a number of the songs fared well as covered by other artists, but John Prine experienced modest sales and he developed a cult following that overlapped folk, rock, and country fans but stubbornly refused to make him an A-level star. His next two albums, 1972's Diamonds in the Rough and 1973's Sweet Revenge, were nearly as strong as the debut but didn't sell significantly better, and 1975's Common Sense, produced by Steve Cropper and sounding more polished and rock-oriented, was a change of pace that not everyone was eager to embrace.

Common Sense was Prine's last album for Atlantic, and in 1978 he signed with Asylum. His first album for the label, Bruised Orange, was produced by Steve Goodman and was praised critics as his strongest work since his debut, but 1979's Pink Cadillac was steeped in rockabilly years before the sound came back into fashion (Sun Records founder Sam Phillips even produced two tracks), and puzzled people even more than Common Sense. 1980's Storm Windows, produced by Barry Beckett in Muscle Shoals, came and went with little notice and ended Prine's tenure at Asylum.

As it happened, losing his second major label deal turned out to be one of the best things that ever happened to John Prine. Unhappy with the dealings of the big labels and their treatment of songwriters, Prine followed the example of his friend Steve Goodman, who after being dropped by Asylum started his own label, Red Pajamas Records. With his manager, Prine founded Oh Boy Records, allowing him to record at his own pace and without creative interference.

His first two albums for Oh Boy, 1984's Aimless Love and 1986's German Afternoons, were easygoing efforts that found him in good form, but 1988's Live, his first concert album, not only captured the charm and unforced confidence of his concerts but offered a career-spanning setlist that was a welcome reminder of just how many great songs he had penned. It set the stage for 1991's The Missing Years, a batch of fine new songs that also found Prine working with a strong and sympathetic producer (Howie Epstein of Tom Petty's Heartbreakers) and working alongside a number of famous friends and admirers showing their support (including Petty, Bruce Springsteen, Bonnie Raitt, and Phil Everly). The album got rave reviews, sold well, and earned Prine his first Grammy award; it could have been called a triumphant comeback if Prine had ever actually gone away.

The Missing Years helped Prine find a lot of new fans while pleasing his longtime followers, and it also gave him new currency in the growing roots music community, who looked to Prine as both a venerable inspiration and a kindred spirit. While he cut a Christmas album in 1994, it would be 1995 before Prine released a proper follow-up to The Missing Years, 1995's Lost Dogs & Mixed Blessings, another Howie Epstein-produced LP that confirmed Prine would be the only songwriter who could have Carlene Carter, Marianne Faithfull, and Peter Yarrow all guest on the same album and make it work.

After a bout with Squamous cell carcinomas in 1998, new music from Prine would become an increasingly rare occurrence, and 1999's In Spite of Ourselves -- an excellent set of duets featuring contributions from Lucinda Williams, Iris DeMent, Emmylou Harris, and Trisha Yearwood -- featured just one new song, the title track, though it was memorable and hilarious. After 2005's Fair & Square, Prine would only release one more album of fresh material, 2018's The Tree of Forgiveness, but a look at the credits indicated the esteem in which he was held by the leading lights of the young Americana community, with Nashville's hippest producer, Dave Cobb, at the controls, and Brandi Carlile, Jason Isbell, Amanda Shires, and Dan Auerbach among the contributors. It would become the highest charting album of Prine's career, going to No. 5 on the Top 200.

By the time The Tree of Forgiveness came out, Prine's health had become fragile -- he battled cancer again, this time in his lungs, in 2013, and in February 2020, he had to cancel a string of tour dates after breaking his hip. On March 19, it was announced that Prine had tested positive for the COVID-19 virus, and on March 26, he was hospitalized as he struggled with the virus as well as pneumonia. Prine's battle ended on April 7, 2020, and that evening, during a DJ set on satellite radio, Bruce Springsteen paid tribute, saying, "He wrote music of towering compassion with an almost unheard of precision and creativity when it came to observing the fine details of ordinary lives. He was a writer of great humor, funny, with wry sensitivity. It has marked him as a complete original." Springsteen's praise was genuine and perceptive, as one might expect, but in an interview years earlier, Prine summed up his life and work better than nearly anyone could, and in just the right style: "I just tried to come up with some honest songs. What I was writing about was real plain stuff that I wasn't sure was going to be interesting to other people. But I guess it was."