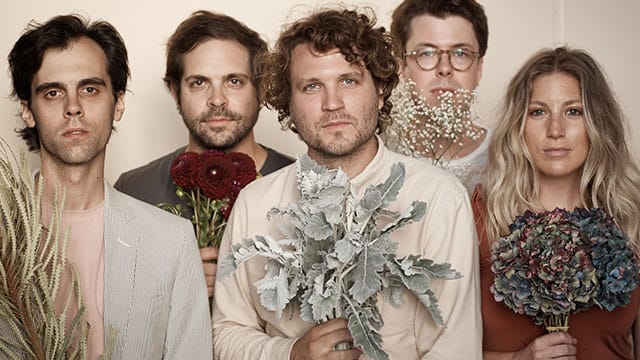 If Ra Ra Riot's new album, Superbloom, sounds especially easygoing and relaxed, that's because it reflects the low-stress environment in which it was made. Instead of being cooped up in a big-budget studio with a ticking clock and ever-building costs, the band held shorter sessions in Los Angeles, Milwaukee, and New York. But perhaps none of these proved as valuable as the time spent at frontman Wes Miles' parents' house in the Frenchtown, New Jersey.

The band initially planned to limit its visit to the quiet riverside borough to recording rough demos to polish up later, but ended up leaving with several album-ready tracks and a new mindset about how to get songs across the finish line. Those songs, combined with a pair co-written with Rostam Batmanglij, and another six tunes, come together to form an album that our critic Matt Collar described as "refreshingly distinctive...sonically adventurous, dance-oriented pop."

AllMusic caught up with Miles to discuss the unexpectedly productive sessions in New Jersey, how he eased into the frontman role, and if he's been enjoying the recent wave of music-oriented movies.

AllMusic: 'Superbloom' opens with the two tracks that you co-wrote with Rostam. Were they written as a pair, and why did you choose them to kick off the record?

Wes Miles: Those two songs came out of the same session where we started "Water" and "I Need Your Light." I did a writing session with him as we were starting that record, we did those four tracks and a few that are still in the demo phase. We just finished those other two first, and we always wanted to come back.

We finished those much later, "Flowers" and "Bad to Worse," they bookended the whole Superbloom record. "Flowers" was one of the first we finished, in early 2017, and "Bad to Worse" was the last one we finished, which was last November. So everything else fit in between those, a lot of writers and a lot of locations, different attitudes and mentalities, everything else that became Superbloom came in between those two tracks, chronologically.

AllMusic: Did you consider opening and closing the record with them, since that was how they came together?

Miles: We have a really dynamic group of songs that make up this record, and there's a danger in that, that it could feel like a mixtape, but that's not what we're trying to make when we're making a record. So we felt like setting the tone with what I feel are two pretty different songs, though still with that Rostam flavor, we felt like that was more important. Then "Belladonna" fits in as a bit of a bigger song, and then "Endless Pain" gets set up really well to be a left turn, a surprise.

AllMusic: Is the tone of the record something you're aware of as you're recording it, or only in retrospect?

Miles: Trying to be too deliberate about a theme and sticking with it, I feel like that's just not our vibe. You need to be able to change and be fluid, especially in the middle of a record. Part of the fun of making a record is you start out with ideas and end up with something that is not really in line with what you thought it would be. So for me, I think it's more about what we feel when we listen to them together, and how we maximize that response.

AllMusic: Were you surprised in that regard with this album?

Miles: Yeah. For example, "Endless Pain," "[A Check for] Daniel," "An Accident," "War & Famine," the songs we did in Frenchtown, at my parents' house in New Jersey, our idea was, "Let's go out there and write a bit, make some demos, see what we have, then re-record stuff." It ended up turning out that they had this certain charm that because we were so relaxed and free, and we had no schedule and were just out there. We hadn't anticipated that being the final tracking of the drums, even though we used one mic for the whole kit, or just two takes on some keyboard tracks, or threw a violin where we had room for it. It was a really DIY, demo mindset, but it ended up feeling like, "These should be the final recordings," so that was a major epiphany.

AllMusic: When you have an easygoing scenario like that, if a song starts to become more agonized and difficult, do you let it go instead of chasing it down?

Miles: It's really delicate. If you're too rigid about maintaining your freedom, that can be restrictive. We had to be open in a lot of ways, but making music is really difficult sometimes, especially when you're trying to get that last five percent. We had to be willing to work just as hard as the other 95 percent to get to the end. Just knowing that we had confidence in who we are and what we're making, that carried over more than in the past.

Usually there's a time component, as well, and deadlines can be really good for a lot of the creative process, but with a hard deadline, we've gotten into trouble near the end of the process, and that's where we haven't been able to cash in or fully materialize that last five percent of something great, because we ran out of time. This time, if we get to that point and we're just hitting our heads against the wall, we have time, so let's use that, that's our way out. Don't give up because it's difficult.

AllMusic: "Bad to Worse" has some very on-point falsetto. I think a lot of people think they can sing in falsetto, but they probably can't do it like that.

Miles: It was something that I had an innate knack for, but there was a lot of work I put into maintaining my voice. Like anything, it takes a whole bunch of work, but maybe it's luck. I think it's also how Rostam pushes me. I can't always sing that well, that was just a special day, maybe a special moment, when I was able to sing it that particular way. So something that's really cool about Rostam is that he's trying to get me to sing really high, but not loud, you can hear that it's kind of quiet singing, and singing that high without a whole bunch of air is really difficult.

AllMusic: When you became the band's frontman, how comfortable were you with moving onstage and engaging with an audience?

Miles: It's funny, there's a video somewhere on the internet of one of the very first shows where I was the only frontperson or whatever, and it's very awkward, I'm just standing around, nodding my head with my arms at my sides, not really doing anything. But by the end of the set, we're playing some crazy song, maybe the "Hounds of Love" cover we used to do, and I'm rolling on the floor and everyone's getting tangled up.

Adrenaline takes you most of the way to what you need to do, or at least it did for me. Performing and singing, you need to try to keep things different and take a step not necessarily forward, but somewhere, every time you play, and try things and take some risks, even if it's conscious. Like, "I don't want to put myself out there and see if the crowd wants to clap right now, but I have to anyway." Usually that pays off, or you learn something if it doesn't. There's always things that you're going to try that just fall flat. I've tripped and fallen onstage, and that's really embarrassing, but there's ways to play it off like it's funny. You just have to allow yourself to be embarrassed sometimes, or do embarrassing things, to grow, to learn.

AllMusic: There's been a glut of music biopics lately. Are you able to enjoy them?

Miles: I've never quite been in a band like Queen or Elton John, but I think because of that, I don't like to watch them. I didn't even see either of those movies. I know I'm going to say those things to myself, like, "This seems stupid." I'd rather watch a doc, even a concert doc. Even Whiplash, a lot of people thought that movie was amazing, and I also didn't see that one, I felt like I had really tough music teachers in the past, so I didn't need to live through that again, all the tension involved with music, I don't feel like that's going to be an enjoyable experience for me.