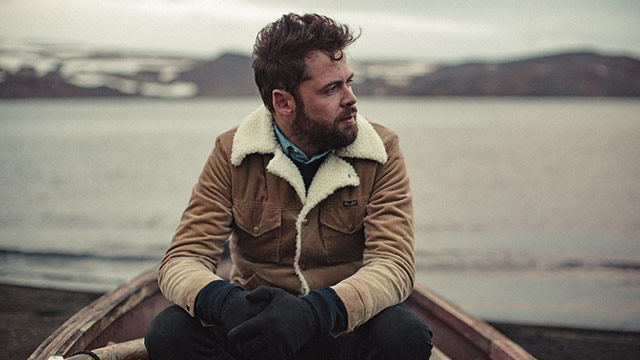 Mike Rosenberg wasn't expecting Young as the Morning, Old as the Sea, the eighth Passenger album, to go Number One in four countries when it came out three weeks ago, but fans in the UK, Australia, New Zealand and Switzerland scooped up the album and propelled the singer-songwriter's latest to the top. Editor Matt Collar gave the album four stars, praising its "deeply thoughtful and sophisticated songs" that highlight Rosenberg's sense of wanderlust and exploration.

And wander he does. When we caught up with Rosenberg, he was preparing for a performance in Lithuania, and has upcoming gigs booked on four different continents. He talked with us about how his experience as a street busker helped him engage with crowds once he went solo, if he buys his own album on release day, and the album that he thinks is absolutely perfect.

Mike Rosenberg: It’s different every time. With this album, I wasn’t expecting anything, really, when it came out, but the response has been like no other record that I’ve ever released, people seem to really, really be digging it. We went number one in the UK and Australia and Switzerland, and I’ve never had number one records before, even at the height of “Let Her Go,” we weren’t getting number one albums. So it was much more crazy than I imagined it would be. It was great, and a relief that people like it and all the preorder copies got to their owners all right and it rolled out OK. It was a sigh of relief and a real sense of accomplishment.

AllMusic: Is it still a big moment for you when you release an album?

Rosenberg: It is and it isn’t. I write so much and I release so much music that I think I’m less precious about that stuff than a lot of people. This is my eighth record, so I know they’re never going to be perfect. You just have to get to a stage where you’ve done all you can to make it a good record, and if it goes down well, then great, and if it doesn’t, you move on to the next batch of songs, and I think that takes off the pressure a little bit, which is a good thing. I see it as each record is like a documentation of where I’m at at the time, and then you move on and learn from it. I’ve definitely got better about letting things go and not expecting perfection.

AllMusic: Was there a time when you were more precious about it?

Rosenberg: My first record, I was very precious about. But with anything, the more you do something, the more you understand it, the calmer you become about it. It’s about getting older and understanding that as long as you put everything into it and make the decisions that you make for the right reasons, that’s all we can do. The album is out, you tour it, and you do another one. So it’s the circle of life, really.

Rosenberg: I can’t remember, the first record came out in 2007 or something, and Passenger was a band back then, it was such a different situation, and there wasn’t any hype about the record coming out. This time, I was running around, doing TV shows, we did a launch show, and it was hectic and really fun. Back in the day it would have probably come out with a bit of a whimper and no one would have known that it was out. It’s come on so much since then, my life has changed so dramatically, that it’s impossible to compare the two, really.

AllMusic: Do you go to a store and buy a copy?

Rosenberg: Yeah, I do buy one. Every bit helps. It’s a nice feeling to walk into a store and buy one, and I reckon most artists do the same thing. It’s a cool moment, it’s saying, “It’s real now, it’s out in the world, let it begin.”

AllMusic: Do your parents buy out the store and give copies to everyone?

Rosenberg: They do something more embarrassing, which is ask me for free copies all the time. I had to explain to my mom and dad, “Look, we’re in a chart battle, you need to help,” and as soon as they knew that, they were rallying the troops, getting all their friends to buy it, friends of friends, they were great.

AllMusic: We were supposed to chat a week ago, but you got whisked off to a festival unexpectedly. I imagine your schedule is pretty planned-out at this point, are surprises like that fun or exhausting?

Rosenberg: It’s amazing when opportunities arise, but you have to pace yourself. It’s so difficult to get it right with workloads. We plan tours months in advance, and you leave a few days off here and there where you feel you’ll be tired after some shows, but if other opportunities keep coming in, those days get swallowed very quickly, and it’s an impossibility to get this stuff right. You just have to roll with the punches. Sometimes you have to say, “It’s a great opportunity, but I need to take a day, otherwise I’ll get sick and have to cancel shows.” That’s the worst-case scenario. It’s a real learning curve and hopefully something we’re getting better at every time we do it.

AllMusic: Did you wear yourself out in the past?

Rosenberg: I still do it now, it’s so hard to say no. I still have the mentality of a street musician, because I was one for five years. Every opportunity that comes my way, I feel like, “Absolutely, let’s do this.” Sometimes, it’s to my detriment. But I don’t think you become successful by not saying yes to opportunities. Every successful artist I know has that mentality, “Of course, let’s do it.” Ed Sheeran is a good mate of mine, and he just flies around the place doing every single bit of promo or gig or interview, and it’s no wonder that when you combine that with immense talent that he’s playing in stadiums and arenas around the world.

AllMusic: When Passenger became a solo act, did you have to relearn how to fill the stage and hold an audience's attention by yourself?

Rosenberg: It was really daunting. Back in those days, I wasn’t playing big places, so it was just 50 or 100 people, but you’ve got to re-learn everything and learn how to walk again. The pressure’s all on you, and everything that happens comes from you. It was a learning curve and a pretty daunting thing to do.

Busking really helps with that, because you spend thousands of hours playing on the street, and if you can play on the street, you can play anywhere. You learn how to talk to people who don’t want to be there, who don’t want to listen to your music, who are going shopping or to get their lunch. If you can convince those people to hang out or buy a CD, then any gig after that is pretty easy, because at least when you walk out onstage, they’re there to listen to music, they want to be there. You already have that over the guys just hanging out. People generally have a pretty bad take on street musicians, so you have to reinvent the stereotype for them and show them that they do want to hang out. So that was massive.

AllMusic: Did you admire the stage presence of any particular solo performer?

Rosenberg: I went to see John Prine when I was 15, and he was just amazing. He told such fantastic stories, he was so funny, but so poignant with his songs, he had everybody on the edge of their seats. I realized then how powerful it could be, and I take inspiration from his show. I saw how powerful that could be, just to be one guy on a stage and grip an audience for a few hours. It’s amazing when it works.

AllMusic: You said you understand that an album is never going to come out perfect. In your own listening, are there any albums you find to be perfect?

Rosenberg: The first Damien Rice record is definitely up there for me. It’s as close to a perfect record as I can imagine, I love every song on there, I love the production, I love his vocal performance and the instrumentation, and it still stands up 20 years later. It was around when I was starting to produce my own work, and I heard his record, and my first instinct was, “I’m fucked, if this is how good people can be, I’m fucked,” and I really struggled with it for a few weeks, and then I grew to love it and realized that I have time to get better. But my first reaction was, “This is perfect, this is amazing.”

AllMusic: Have you had the chance to rub elbows with any of your musical heroes?

Rosenberg: I’ve done a lot of touring with Ed, and he operates in that crazy celebrity world, so there’s been a few moments when I’m hanging out with him and Taylor Swift will walk in or whoever. But funny enough, now that I’ve been doing music for a long time and met a lot of musicians, I’m a massive soccer fan, and it blows my mind much more to meet famous football players. It makes me feel like a five-year-old, because I’ve loved football since I was a kid. It still seems very mysterious to me, whereas with music, I’ve seen behind the curtain a bit and I know how it works, where football still feels so exciting and different. So meeting my favorite footballers has been some standout moments for me.

AllMusic: Who are you still holding out hope to meet?

Rosenberg: Thierry Henry would be that guy. One day, for sure.