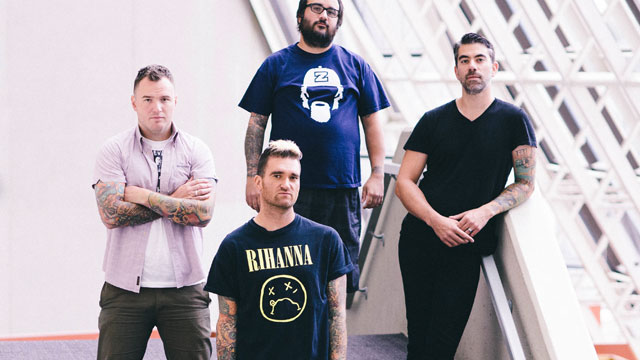 When New Found Glory released Resurrection last fall, the band was adjusting to its new status as a four-piece. Original member and guitarist Steve Klein was out of the band, and the remaining members were deciding how to adapt to the new streamlined lineup on both a professional and musical level. The result was Resurrection, an album given four stars by AllMusic editor Gregory Heaney, who praised the its "revitalized and refocused" sound. Resurrection was just given the reissue treatment, which included acoustic tracks, two new songs and a new version of "Vicious Love," featuring guitarist Chad Gilbert's fiancée, Paramore vocalist Hayley Williams.

The following interview was conducted last year, before the album's original release, and the band's new dynamic had resulted in Gilbert and frontman Jordan Pundik feeling extra enthusiastic about their future. They discussed some of their less-obvious influences, how they survived in a scene when most of their peers have vanished, and revisiting old material with a fresh perspective.

AllMusic: Naming an album Resurrection comes with a lot of meaning already attached.

Chad Gilbert: A resurrection, to me, it isn’t a comeback. How I see a resurrection is something that’s suffered some sort of tragedy and comes back stronger from it, that’s a resurrection. Also, it acknowledges and it doesn’t ignore something that happened. It acknowledges that something happened and there was a struggle, and it’s a restart. We know that our band has been through a lot, that we were five members, we’re four members now, and that’s something that if you love this band, you’re always going to know that there was a point of seven albums with five people, and now there’s not five people, but we’re not afraid of that change, and that’s what the resurrection is. “We know this shit went down, and from this day on, we’re now better.”

Jordan Pundik: We’re more self-aware and rising above all that.

Gilbert: That is the message of the album, for anyone to not be afraid of the challenges you face in your life, because you don’t know what you’re worth, and you’ve gone through crap, and it tells people to not be afraid. Don’t feel bad for yourself when things happen to you, because when you come out of them, that’s how you know your worth as a person. People can hear it and say that this band has never been more proud to be in a band.

AllMusic: How has it felt to play the older songs with a smaller lineup?

Gilbert: Honestly, it’s going to sound like I’m going to say that everything’s awesome, but the truth of the matter is, it really does nothing. We’re a tighter band, and as a musician, you know that less is more, and a band sounds bigger with less. Regardless, we’re a pop-punk band, we can try to convince you we’re anything else, but the truth of the matter is, our songs aren’t crazy, intricate songs. They’re creative, they’re clever, we have our own style that we claim, but live, you’re not missing anything.

Going into the new album, we went back and revisited Vulgar Display of Power and Far Beyond Driven and the first Rage record and all the Descendents stuff, four-piece [bands]. When there’s a guitar lead, you only hear the bass, for the most part. If the guitar lead’s playing, there’s no rhythm guitar. That’s what we did on this album, we’re like, hey, we’re four people, four parts. When the chorus comes in, I double the guitar part, and it will feel more intense from the production side, but I don’t add a guitar part, it’s the same part.

AllMusic: So is there more pressure on the bass player now to fill that rhythm guitar space?

Gilbert: On the record we did more with the bass than we have before, and we did more with the guitars, and it wasn’t like, “Oh, now we have to do all these parts to make it sound bigger,” but we’re going to make it sound bigger by doing way less. All these riffs, all the guitar riffs have this energy and emotion in them without the vocals, then you add the vocals and you’re like, “Classic New Found.” Every song has a guitar riff you can air-guitar to, honestly.

AllMusic: You brought up Pantera as an influence, what were you able to learn from them?

Gilbert: It was more about how there’s riffs that sound huge and it’s the bass and the guitar doing the same thing. [Pundik sings “Cowboys From Hell” main riff, Gilbert sings “I’m Broken”] There’s all that stuff where you sing the bass riff almost more than you sing the guitar part. With that said, it’s not like it’s a heavier record, I don’t reference Pantera to say our record sounds like Pantera, we sound nothing like them, but when there’s a song that’s slower or poppier, it’s the guitar playing the riff. We have a song that I love, the slowest song on the new record, called “Vicious Love,” and the riff is the bass and the guitar, and if there was screaming over it and it was in a minor key, it could be a whole other thing.

AllMusic: So many of your peers have come and gone, and some of them are getting around to doing the reunion thing now, but you never went away.

Gilbert: It’s cool, I really believe that you have four people in this band who didn’t start this band to be famous, the chances of getting popular on MTV or famous growing up in Coral Springs is slim to none, we weren’t living in L.A. or New York City with tons of punk bands, it was metalcore, hardcore, ska and us. We never were ones to have it easy, and I feel like we really worked hard as a band, and we love playing music. We know that a show with 150 kids could be more fun than a show with 15,000 kids, so when you have that mentality, you don’t really care where you’re at in the spectrum of who thinks they’re popular or who think you’re not. Where other bands, when their tours might not have done as well as their ones when they weren’t on the radio, they might have broken up, we said, “This is just as fun, there are people who want to be here and who aren’t hold to be here.”

AllMusic: It feels like a lot of the early 2000s Orange County hardcore bands are doing the break-up/reunion cycle now. Did you cross paths with that scene much?

Pundik: Our band started in that scene, touring as a pop-punk band on a hardcore bill.

Gilbert: There’s a riff on our new album that’s totally a shout-out to Snapcase. When we did one of our first tours when we were a small band, the order was New Found Glory, Ensign, Grade and Snapcase. That was how a lot of our guitar tones started, we looked at their gear, and I remember their guitar player being like, “Dude, don’t steal my stuff,” and he had a dual rectifier and all this stuff and we were like, “Yeah, we want to sound heavy,” but we were playing pop-punk.

Gilbert: It’s more like putting on a record and having front lounge moshing, we’ll crowd-surf each other in there. Our bass player has his own back lounge parties, his is like Lionel Richie, Phil Collins, and he’ll blast it. You’d think he was listening to Slayer, but he just goes off to that stuff. I think a lot of listening together, especially if it’s not at three in the morning destroying the lounge, it’s right before we play, we all go in the dressing room and we have a boombox in there.

AllMusic: What's the record you've heard more times than any other?

Gilbert: They Might Be Giants, Lincoln. From when it came out when I was in elementary school until now, I listened to them, but that album is the first one I got when they had a song on Nick Jr. or something, and from then on, from the eighties on, I’ve listened to that more than any other record.

Pundik: Probably a Dinosaur Jr. record, maybe Where You Been, I got that in high school, and it’s one of those records I always have a few songs on a playlist, any playlist, or the whole record, saved to my phone.

Gilbert: Also, Discount, Half Fiction. I think I’ve listened to that since it’s come out…it never goes out of rotation. The singer was in the Dead Weather with Jack White and the Kills; she disregards this other career, but she used to sing in a band from Florida, a pop-punk band, and no one knows this, but to me, our sound, when you hear them, it’s more of an influence than even West Coast punk was to us.

Pundik: There’s that new style of cathartic, sloppy pop-punk sort of stuff, like Wonder Years, and when we were coming up, they were that for then. Sloppy in a good way, jangly.

Gilbert: They had J. Robbins producing once they got a little popular. It’s awesome. It came out in like ’96, listen to it and think of us. Then really listen to our music and say, “Ah, New Found is like a more polished Discount.” With Earth Crisis, Firestorm. We’re just confused.

New Found Glory is on tour with Yellowcard through late November