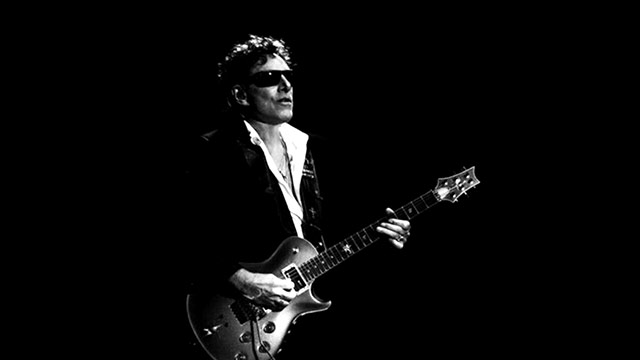 At an age before the rest of us were in middle school, a young Neal Schon knew that he wanted to make his own way, and that he was going to do it through music. And after decades of success with Journey, Santana, Bad English and several solo albums, Schon's childhood decision will lead to his enshrinement in the Rock and Roll Hall of Fame, along with his Journey bandmates, in April.

After the announcement was made, we hopped on the phone with Schon to discuss how he chose the musician's path, the early collaborations with some musical giants who helped send him on his way, and the intense devotion he still maintains to his instrument.

AllMusic: You don't seem like the kind of guy who needs validation, but the news of the induction still has to feel good.

Neal Schon: You’re right, I get the validation every night when we play, and the fans have always meant the most to me, they’re the ones who keep everybody going and allow us to do what we love to do. My hat’s always off to them. Maybe two decades ago, I was wondering why we were never up to get in, because we definitely had the credentials at that point, with selling so many records, close to 90 million now. I’ve been here since the beginning, when our old manager approached me and said he wanted to manage us. He’d been a guitar tech for Santana when I was in the band briefly in the seventies, and he approached me about wrapping a band around myself and wanted to manage me, and I said, “Let’s go,” and that was it, that was the beginning, and here we are now.

AllMusic: I read that you've never attended the ceremony, but have you been to the museum itself?

AllMusic: Do you appreciate seeing musical artifacts in a setting like that?

Schon: Absolutely. New York has some of the greatest museums with some of the finest first instruments that were ever made, and last time I was in New York, I went with Steve Miller and checked it out, and it was amazing, so I love seeing the history of people’s instruments.

AllMusic: Have you thought about what items you'd be willing to give them to display?

Schon: I’m sure I can find something, I have lots of guitars, way too many. All my platinum and gold records are in my attic, in boxes. I’m not the person to display them in my house, I don’t need that to look at to feel good about myself.

AllMusic: And when the handyman comes, you have to spend an extra hour talking to him about them.

Schon: Yeah, and then you get charged four times what it’s supposed to cost. But even when I don't display them, they open the garage to get a ladder and see a couple of Lambos and say, “OK, I’m going to charge you, anyway.”

AllMusic: Rock Hall aside, it sounds like you still find plenty of ways to stay enthusiastic about music.

Schon: I’m still a music fanatic, that’s why Carlos Santana and I get along so well. We love music more than anything, it never gets old, there’s always so much to learn about it, so I’m into every aspect of music. I’ve never rested on my laurels, thinking I have so many gold and platinum plaques that I don’t need to worry about it anymore, it’s never like that. I’m only as good as the last note I played.

I totally admire and respect guys I grew up listening to, like B.B. King, who I was able to play with when I was very young here in San Francisco at the Fillmore West, and Albert King, Jeff Beck, Clapton, all those guys. Jeff Beck continues to move forward, and I’m one of those guys, I’m always going to be pushing to move forward. I have many different projects I’m working on now, and I have quite a collection of solo records, and people have been asking me to do a box set, and now is probably the time, because of all this happening. I have some new solo records I’m working on, including a real stripped-down blues album, with late-fifties type production, no echo, just really raw. I’m into that, it’s a whole other side that I usually don’t record in, and I love that.

AllMusic: You started down your path at an age when most of us were still figuring out what we liked. I imagine knowing what you wanted to do from that early on was pretty useful.

Schon: I worked for a couple of months in the summer in the garlic fields with my cousins, and it was extremely hard work, because I was such a skinny runt. Once the wood crate was filled up with the garlic, I had to take it to dump it, and one of my cousins would have to help me pick it up. But I made 100 bucks by the end of the summer, and could buy a minibike, and then the next job I got was working in a bicycle shop in San Mateo, I was rebuilding bikes, fixing bikes, and I did that for minimum wage, and it was nice that they let me work there, because I was way underage, but I didn’t want to be told what to do, because I knew what I was doing.

I decided then, when I was 12 and a half, “I have to find a way to be my own boss,” and that’s what I did, I dedicated my life to guitar and music, and from that point on, I was cutting school every day, I was in my bedroom digesting whatever record I had on, learning what I could, the guitar was glued to my hip. I learned a lot really, really quick, because I didn’t mess around. I didn’t do what normal kids did at that age, I did that later once I got off the ground and felt like I was heading in the right direction. I’m glad I did that, and I think that other kids would be really happy to do that for themselves instead of studying forever while you try to figure out your life, it’s sitting there at your feet, you just have to be willing to want to work and go.

We had really great music around the house, mostly jazz, because my dad was a jazz musician, and a big band arranger and writer, and mom was a singer in the big band that my dad ran, so it was a natural thing for me to go in a musical direction. I started out with horns, because my dad was a tenor sax player, but when I heard the twang of a guitar when I was 10, I said, “What’s that?” It goes back to early music, early Stones, the Dave Clark Five, getting my chops together, learning as many chords as I could, and managed to meet a lot of people who took me under their wing when I was young, like Vince Guaraldi, who was a friend of my dad’s and I sat in with when I was 12.

AllMusic: Since you picked up the guitar as a kid, have you ever had a long gap where you didn't play?

Schon: To this day, I still play for hours a day, and I write all day long. I have so much material all over the place. In the early days, I’d write with a cassette machine, and every riff that I came up with, I laid it down there, so I wouldn’t forget it. When you have that many ideas, you have to put things down, otherwise they’ll resurface, but maybe 10 years later.

I also like to fly off the cuff, because that way you know it’s for real, you haven’t had enough time to overly-think it to where it’s homogenized yet. So I use my iPhone now, and I have a looping system and a small studio at my house where I play at very low volume, good enough to work in. I’ll lay down demos one after another; yesterday, I laid down 20, my phone is jammed, I always have to dump it into the computer, but it comes in handy. I saw Tony Bennett last night on TV, and he’s one of the greatest singers ever, and he’s celebrating his 90th birthday, and he sang so amazing, so I feel like the people who stay in it, it’s really helpful to keep moving all the time. I never sit still.

Journey will be inducted into the Rock and Roll Hall of Fame on April 7. They currently have Asian and North American tour dates lined up through May.

Aerosmith's Brad Whitford on the Band's Eras, His Heavier Influences and Col…

Aerosmith's Brad Whitford on the Band's Eras, His Heavier Influences and Col…