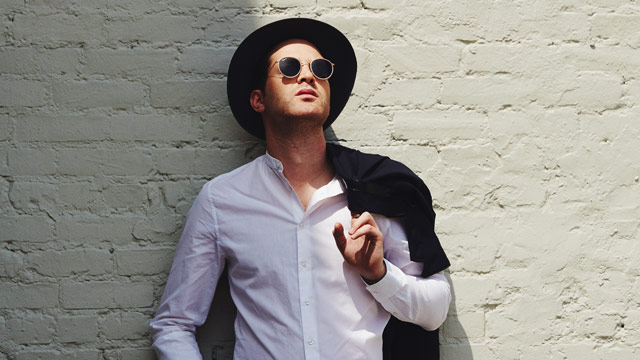 With his 2009 debut LP, A Strange Arrangement, Ann Arbor musician Andrew Cohen, under the guise of Mayer Hawthorne, arrived as a fully-realized neo-soul singer-songwriter, enthusiastically blending the sounds of Motown and classic soul with breakbeats and modern energy. In April, he released Man About Town, his fourth album, and is now gearing up to hit the road for a stretch of dates booked through August, including five big gigs opening for Daryl Hall & John Oates.

We got Mayer Hawthorne on the phone to talk about the perils of sampling, the rap music that served as his gateway to the past, and how he adapted the falsetto vocal style that has become his hallmark. His tour kicks off today in Santa Ana, California; dates are listed below.

AllMusic: How did you initially develop your awareness of soul music?

Mayer Hawthorne: I definitely got some of it from my dad and from my parents’ record collection, but the majority of what I know about soul music, I learned through hip-hop, from digging through the samples from my favorite rap songs, like Gang Starr and Diamond D and Pete Rock & CL Smooth.

AllMusic: Did someone ever have to explain the concept of samples to you?

Hawthorne: I feel like it was something that was pretty obvious to me, from my musical upbringing. My dad taught me to play bass guitar when I was six or seven years old, and I played in bands all throughout my childhood and middle school and high school, so I had a pretty good knowledge of music early on.

AllMusic: With the legal issues that eventually came with sampling, do you think kids now might not be getting as much of a window into the past?

Hawthorne: You’d think that that would have deterred me from wanting to do that, but it did not at all. All my favorite rap songs were the ones that had samples of old soul music, and so when I started making my own rap music, I wanted to do that, I didn’t want to make keyboard beats, I thought that was wack, I wanted to sample and use breakbeats and stuff. Then I started getting sued for doing that, we’d make a thousand 12-inches and sell them, and then we’d lose all of the money that we made on clearing the samples, and I got really frustrated by that, so that’s how Mayer Hawthorne started.

AllMusic: When did you realize that singing in falsetto was the way to go?

Hawthorne: When I first started dabbling with my own soul music, the guys that I was trying to emulate were like the Moments and the Whatnauts and Eddie Holman and Curtis Mayfield, those guys all sang in that pillowy falsetto. Honestly, it was something that I never once even thought about, it was just, “I want to sound like them, and that’s how they sing.”

AllMusic: Does your voice require any special maintenance?

Hawthorne: It’s very different, and I totally didn’t understand the difference or anything about how to use my voice properly until years later, when I started working with a vocal coach, and then I had to really start treating it like a real instrument, like a saxophone or a piano or anything else. The falsetto stuff is actually easier for me than when I’m belting from my chest, that’s where I get in trouble, where I start wearing my voice out on tour.

AllMusic: A song like "Fancy Clothes" has a lot of layers. Does a song like that arrive fully-formed in your mind or do you build it out in the studio?

Hawthorne: It’s pretty immediate. With “Fancy Clothes,” I was in Paris, and I heard the entire song like it’s playing on the radio, in my head, and for me, the challenge is always reverse-engineering it out of my head and I have to just play it over and over again in my head and try to figure out what is the bassline doing, what’s the drum pattern, what are the harmonies there.

AllMusic: When you were a teenager, did you have music that you'd play loudly in your room to annoy your parents?

Hawthorne: Ice Cube, N.W.A, Public Enemy. That was it for me. And it worked, they hated it, they really hated it. Wu-Tang, I remember playing Ghostface Killah for my mom, and she almost grounded me just for knowing about that. Of course, that made me love it even more. And 2 Live Crew, I still love 2 Live Crew.

AllMusic: We've been listening to censored 2 Live Crew albums in the office, and it's almost better that way.

Hawthorne: I’ve been saying this for years, that I actually prefer the censored versions of the records, just because they’re a little less abrasive. The censored version of As Nasty As They Wanna Be is pretty awesome.

AllMusic: We've lost several musical icons lately. Is there anyone you are especially happy that you were able to see before they passed?

Hawthorne: The one that always comes to mind is James Brown, I got to see him before he passed, which is something I’m so happy about. He did it all, he was Mr. Dynamite. He did not disappoint. I was losing it, I was totally losing it, it was incredible. I was riveted.

AllMusic: You have a pretty extensive touring schedule coming up. Is that more intimidating or exciting?

Hawthorne: It’s daunting, for sure. Mostly, just because I don’t ever want anybody to want their money back when they come to see Mayer Hawthorne, I take so much pride in my live show, I pride myself on the fact that I have one of the best live shows in the world, and I want to maintain that quality, always, and that’s not easy. It’s a lot of work.

AllMusic: How much rehearsal goes into it?

Hawthorne: It’s weeks’ worth, and even more weeks of preparation before we even start rehearsals. There are so many things that go into it, too, from choreography to wardrobe to stage production to tour routing, it’s endless, there’s so many components that go into making that work.

AllMusic: Are you a hands-on leader or are you able to delegate?

Hawthorne: I’m such a control freak that I wish I could delegate more of that, I do my best to delegate, but I design all of my own tour merchandise, for the most part, it’s just something that I feel like I have to do.