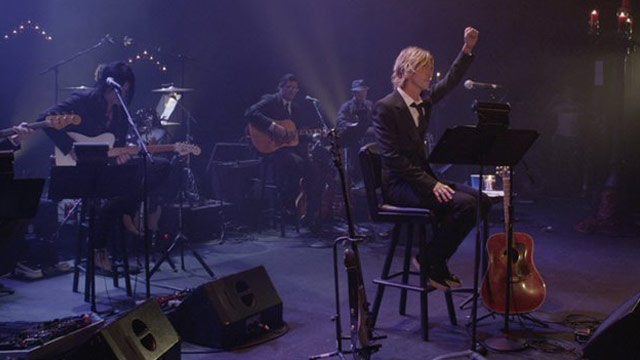 ​Adapted from his autobiography, It's So Easy and Other Lies, Guns N' Roses bassist Duff McKagan and filmmaker Christopher Duddy explore his mischievous youth in Seattle, the formation of GNR and McKagan's downward spiral and redemption in a new documentary. The just-released film was finished before McKagan rejoined his old band, but the specter of that reunion loomed large over some aspects of the filmmaking, as Duddy explained in an interview last week. We also talked about how McKagan helped open the door for the band's current, stadium-filling incarnation, balancing the darkest moments of McKagan's life with levity, and when he realized he had to distill several possible films' worth of content into one.

We also have an exclusive clip from the film, in which McKagan matter-of-factly outlines the unnervingly early beginnings of his various substance abuse habits, and describes, along with a childhood friend, how they hotwired over 100 cars in the Seattle area.

AllMusic: When did you realize that in telling Duff's story, you also would have to tell the story of the 80s Seattle punk scene and the formation of Guns N' Roses? Those are like documentaries in themselves.

Christopher Duddy: When you start out, it’s an investigation, and a lot of that Seattle punk stuff wasn’t in the book. We based the documentary mostly on his book, which gave us a template, but when I went up to Seattle to start shooting, the stories started to find themselves. We all know the Guns N’ Roses story, but I didn’t know the pre-Guns N’ Roses story until I read the book. There are a lot of layers to Duff, he’s not just a one-hit guy, there are dark and light parts, and his story is very inspirational.

AllMusic: You must have had a hint that the summer tour was in the works while you were making the movie. Did that knowledge influence the way the movie was being made, was there anything you shied away from to avoid causing any trouble there?

Duddy: This was a long journey, we started making this four years ago. There was no sense of the GNR reunion thing back then, Duff was in Loaded and Walking Papers and the all-star bands, and he was traveling a lot. So we would shut down while he’d go on tour for a month and pick it back up.

It was the last year and a half when the talks of the GNR reunion started, and Duff wanted to be real sensitive to that, knowing who we’d be dealing with on that level if we weren’t sensitive to it. From the beginning, we didn’t want this to be a Guns N’ Roses documentary, as much as the investors and distributors wanted it to be, and Duff was adamant about making it not a Guns N’ Roses doc. That’s why that section is just another part of the movie, it’s a chapter of his life. Once they started the talks of the reunion tour, we made it a point to be real sensitive about that and not stir things up or convolute them with this movie. The silver lining at the end of all of this, after we had lots of delays and a lawsuit with a producer, now the timing is that the movie’s coming out right as they’re starting this reunion tour, so we got lucky with that.

I was looking over my shoulder a lot during the making of this movie. When you get to the level that Duff’s at with fame and fortune and rock star-ism and all that, there’s a big target on their backs, people are always trying to shoot at that target, and Duff’s real sensitive to that. There could have been many things that disrupted that, and it took them a long time to talk through all that because of the volatile relationships that had been resonating for years after their breakup.

AllMusic: How excited for you when you managed to get the footage of Duff's wedding? That's some pretty personal stuff.

Duddy: Totally, he handed me this box while we were digging around through his shelves in Seattle, I was saying, “I need anything you can give me, photos, video,” and he pulled out a box of VHS tapes, and he said, “I don’t know what all is in here, but you can use whatever you find in here.” My editor and I went through the footage and we found that. I get goosebumps when I see that part of the movie. When you set out to make a documentary about somebody, it can be real tricky, you’re pulling the curtain back for people, and Duff is real honest about his dark side, and he wanted to show both the good stuff and the bad stuff, and a lot of people don’t want to do that.

AllMusic: Towards the end of his first stint in Guns N' Roses, he looked especially unhealthy. Was it difficult for him to see that old footage?

Duddy: I think anybody, when you’re really digging deep and looking at yourself like that, especially when you’re going to share it with the world, I think it’s hard to look at. Duff really wanted to show that stuff, and with where he is today being such a night and day difference, I think ultimately it’s about inspiration, and that’s part of the reason he wrote the book. He had an addiction to drugs and alcohol, and he beat it, and that can show people who struggle with that that they can do it, too. Duff wanted the movie to be even more about that, because that’s who he is.

AllMusic: Duff was also the first of the original members to return to the band on a semi-regular basis. What do you think about his personality made him the right candidate to open that door?

Duddy: He’s really personable and down to earth, and he really genuinely likes people. When I first met him, we were neighbors, and we were walking our kids to school. I’d see him almost every morning, and we became friends, and I got a strong sense that he was one of those guys – and I knew who he was, I was a Guns N’ Roses fan, I’m the same age as those guys – but he was like that with everybody, just a real approachable guy, real friendly, and as far as the GNR thing goes, he always had the olive branch out to Axl.

Honestly, if it wasn’t for Duff, I don’t think this would be happening, he’s the guy that got them back together, almost singlehandedly, really, he’s just that kind of guy. We’d be in airports, and people would come up to him and he wouldn’t turn his back and avoid them. If he saw somebody recognize him, he’d go to them instead of letting them come to him and he’d shake their hands and talk and sign an autograph, he’s a super down to earth guy like that. He was the right guy to make that happen, to get the reunion together. People like Duff, they just like him.