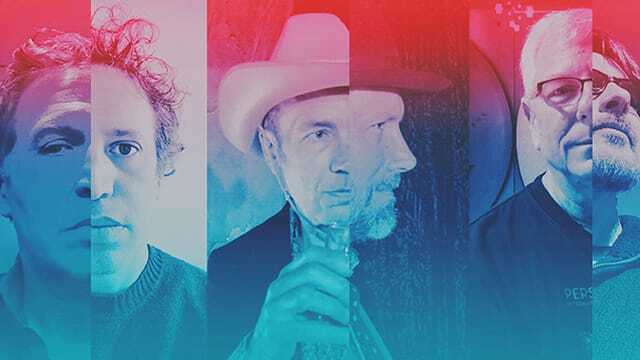 Naming an album The Universe Inside wasn't meant to be a cheeky nod to our current housebound condition, but the Dream Syndicate's Steve Wynn is embracing the fortuitous happenstance that brought the record both its prescient title and its unexpected musical journey. Born out of a late-night jam that was never intended to be an album, The Universe Inside finds the band pursuing its freeform, experimental side to an extent it never has before on a studio album, while still sounding purposeful and confident.

The Dream Syndicate made its initial mark in 1982 with The Days of Wine and Roses, considered by editor Mark Deming to be "the finest LP to come out of the Paisley Underground's salad days." Subsequent evolution followed until the band's break-up in 1989, and upon its rebirth in the 2010s, Wynn continued to steer the band in new directions, emphasizing psychedelic exploration. With that approach in mind, The Universe Inside feels like Wynn and the Dream Syndicate 2.0 has reached its promised land.

We spoke to Wynn from his home in Jackson Heights, Queens, which has become the epicenter of New York City's COVID-19 outbreak. He told us about the music that's helping him get through these dangerous times, the experience of recording an album with "no thought" behind it, and how he fully understands that asking someone to listen to your improvised jams can be a dicey proposition.

AllMusic: Does it feel like this album will inevitably be viewed through the prism of what we're dealing with now, regardless of your intention?

Steve Wynn: Yeah, I think that's likely to happen. But it's kind of a fitting record right now. Right now I'm reaching out for music that is escapist, long-form, expansive, psychedelic, trippy, "take me out of my mind and drop me off somewhere else, please," music, so I think this record fits that mold pretty well.

AllMusic: What music has been filling that role for you?

Wynn: Things like Can, Soft Machine, and a lot of jazz, early 70s Miles, Coltrane, Albert Ayler, things that are trippy in general. But I'm also thinking about what I'm not listening to; I'm a fan of the Clash, that's a band that meant a lot to me when I was getting into music as a teenager, but I don't want to hear the first Clash album right now, something that gets me riled up and angry, that's not what I need at this moment.

AllMusic: You have plenty of time to finally get your head around 'Sandinista.'

Wynn: Personally, that's my favorite Clash album, so no problem there.

AllMusic: I appreciate your confidence in how the first music you shared from the record was "The Regulator," a 20-minute piece.

Wynn: We put together a 4-minute edit for the label, and they said, "We want the long version." This is who we are. The Dream Syndicate, from the very beginning, has always been about being able to stretch things out and playing two chords for an hour if we feel like it, to see where it goes, and to mix that sense of experimentation with hooks and pop song type things, being seductive and repellent at the same time, having that push and pull with the audience and letting them take that ride with us.

This is the record, more than any record we've ever done, where we just let that fly. I think our tendency to disregard time and space and just jam away would happen live onstage, and if we played 15 groovy little pop-rock songs and one song that stretched out forever, people would say that was the best part of the show, and we'd say, "Right? It was!" Then we'd go back into the studio and do nothing like that. This is the first time we said, "This is what we do better than anything else, so let's do it."

AllMusic: Was that something you expressed to the band beforehand or did you stumble into it?

Wynn: There was no communication, and that's why it worked so well. We were in the studio working on something else at the time, and we had just finished a 12-hour day of shorter song forms and overdubs, and then we just relaxed with a long jam, just for the joy of seeing where it would go, like a sonic ouija board. That was really not with any mission statement or any plan, "Let's do this and we'll put it out," the tape was rolling and we did it.

It wasn't until afterwards that we went back and said, "That really worked, we hit on something right there, it would be great to put this out." The original idea was to put out the entire 80-minute jam, an unbroken, free-form thing, as an instrumental, and put out 500 copies on Record Store Day, but we had fun chipping away and adding and subtracting and putting form and structure and purpose to where there had been none originally.

AllMusic: With "The Regulator" being as long as it is, it's still quite economical lyrically.

Wynn: That's so unlike me, so I lucked out. I tend to write a lot more than I need and want to use it all. Like a lot of this record, it happened without a lot of forethought. I was trying to figure out how to approach it lyrically, or if I wanted to, and I wasn't sure.

I was walking around in Manhattan one day, and I hit upon an approach to the vocal, almost spoken word, like Ken Nordine or Captain Beefheart, and I raced home to try out the idea in my head. I put my phone in front of me and held a microphone and harmonica in one hand and just read the lines in random order, where they felt like they should go, as a placeholder, just to get something down and finish it later, and that was the take.

AllMusic: Do you try to make narrative sense of it after the fact?

Wynn: Normally I would say, "OK, let's make it better, let's flesh it out and see where it's going," but the same way we recorded the original music, there was no thought, it was what felt right and natural. I was inspired by the music to sing what I did and place things where I did, and it usually goes the other way around: the sensitive, tortured singer/songwriter writes the song from the depths of his soul and tells his band, "Now you guys have to go in and have my back and make it sound good." This time, the band was so great, and now I have to do it justice with the proper words.

AllMusic: How upset are you that you can't head out and play it right away?

Wynn: If you ask any member their favorite Dream Syndicate record, it would be this one, we're all really excited about it and are dying to go out and play it. On the other hand, we don't know how yet, because we've never played it live. It wasn't conceived this way, we have to go back and learn what we did that day, and we don't know who played what, how we got the sounds, so it's going to be a little bit of study and practice and forensic science to make sense of it all.

AllMusic: Are you worried that much scrutiny will make it lose its magic for you?

Wynn: Not really. At this point, it all feels very intentional, it feels like a composed piece that we probably couldn't have done even if we'd tried to have something like this. It will be fun to learn how to do that. When we first finished mixing the record and thought about playing it live, we were going back and forth, "Should we take the basic themes and jam and have brand new jams?" and we agreed, no, we've made something here. Now it has to be what it is.

If a band says, "Hey, we went and jammed for an hour, do you want to hear it?" "Yeah, I'll get around to that later..." It sounds terrifying, to listen to someone's jams, it's like someone telling you their dreams, which can be entertaining or mind-numbingly dull. I don't think this sounds that way.

AllMusic: I was struck by the last track, "The Slowest Rendition," which has this propulsive momentum musically, but what I read as fairly bleak lyrics ("I am the derelict conductor/Of the broken symphony"). What note does it end on for you?

Wynn: We started playing this music after a 12-hour day in the studio, starting after midnight, until almost two in the morning. That's not anything we haven't done before, but after 14 hours of playing, we were pretty beat. The whole time we were playing this, we were almost daring each other not to stop. If anybody stopped at any point, someone else picked it up with a new riff or new idea, and we just kept going. On that last one, to me, I can hear us just pushing the rock up the hill one last time, and it's this pained defiance, this broken determination.

And I felt that way when I wrote the words to it, and the words to the song are about my good friend and bandmate, Scott McCaughey, who had a massive stroke while on tour, which was devastating to him and everyone around him. At the time, I was thinking about him a lot and about the idea of somebody, as great a songwriter and as smart and as prolific and sharp as he is, having to dig back in and rebuild his mind, his thought process. The same way I feel about the music, a band exhausted and nearly broken, just using everything they could muster to get to the finish line, the words took the same turn.

I love how when I hear it, I can hear just the beautiful exhaustion of it, it's all there, and so honest. If I, as a lyricist, can respond honestly to everything I'm hearing that was being played, it's pretty real. You usually go into the studio and try to get it right, then more right, and fix things. This is all beautifully wrong and right at the same time.

AllMusic: And yet you say you hadn't let yourself do that on a record before.

Wynn: When we made our first record, The Days of Wine and Roses, we had no budget for that, and we made it all in one night between midnight and 8 in the morning, because that's when the studio was cheap. So we did make our first record, the one that we're maybe most known for, in that same kind of crazy, hazy, trippy, exhausted state, and now we've gone full circle to that same sort of thing.

AllMusic: For now, the only way to hear this album will be for people to listen at home. What would you say is the ideal setup for listening to it?

Wynn: With headphones. And definitely late at night, the same way we made it. We started around 12:15 a.m., so put it on at 12:15 a.m. and just let it go. And don't do anything else, just lie there, eyes closed, just tripping out and taking it all in. Have that late night experience where things get weird and magical. I think the only thing on this record that didn't happen instantly and easily was the title, we took a long time settling on it. We started with The Universe Inside, and went to about 50 other titles and came back to it at the very end. Turns out, it's the perfect title for right now. Here we are, we're all in the universe inside. In a way, the record is your portal to getting outside for a little bit before you're back in again.