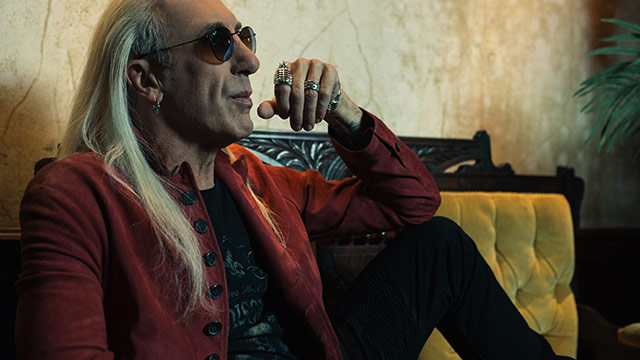 In 2016, Twisted Sister performed what the band said were its final shows. Without wasting any time, frontman Dee Snider released We Are the Ones, a solo album that embraces his hard rock roots, while also celebrating his affinity for punk rock and sprinkling in some contemporary sounds. Along the way he couldn't resist rethinking two old classics, putting his own spin on Nine Inch Nails' "Head Like a Hole" and rearranging his own "We're Not Gonna Take it" as an acoustic ballad.

We talked with Snider late last year about moving on from his iconic band, how his nutritionist and Debbie Gibson helped out with his new record, and how he realized he'd been screwing up the lyrics of one of his biggest hits.

AllMusic: Now that the album has been out for a few months, what new things are you noticing about it?

Dee Snider: I’m realizing that this album draws more from my punk influences, and I do have them. I just was on Steve Jones’ radio show, and I was telling him that without the Sex Pistols, there would not be Twisted Sister. Without the Pistols, there would not be “We’re Not Gonna Take It.” I’m a punk fan, and that attitude and drive, especially live, permeated a lot of the music.

On this record, I’ve jokingly said that I have a no-headbanging policy, and then it became a headline – come on, man. When I wrote the other songs for Twisted, I thought about headbanging, that’s what I wanted to do, that’s the feel and the driver. With the new stuff, I don’t feel the need to thrash in that fashion, it’s much more from that machine gun staccato, that punk philosophy, as opposed to metal.

AllMusic: A song like "Crazy for Nothing" has that sort of full-steam ahead energy to it.

Snider: I love playing that one live. You can’t help hyper-analyzing what happens with records once they’re out, which songs people are downloading. Obviously, a lot of the people checking it out are going to be my old fans, and so musically, it’s skewed more towards what they would be drawn to, so the more contemporary rock songs are way down at the bottom as far as people downloading them. It’s interesting to analyze, but hopefully as the record reaches a wider audience, it will broaden the appeal once people start to check it out and the other songs will connect more widely.

AllMusic: It must be fun to try things you didn't feel you could do with Twisted Sister.

Snider: Absolutely. I have to make it very clear that there was never a plan to continue on musically without Twisted Sister, I was closing the door on that chapter. And then my producer said to me, “I think with the right music, I think you could have appeal to a new audience, a contemporary rock audience,” and that started us down this path. With the door on Twisted Sister being closed, I said, “Look, I’m not making another Twisted record,” and I said to the guys in the band, “Here’s what I’m doing, and I’m not doing this to go off and do Twisted Sister music without you guys, I’m going to try to reinvent myself as a contemporary artist.”

I can’t just say, “I’m going to retire,” and then go off and start it up again. That was an old trick when you were first starting out with bands and you wanted to get rid of a guy in the band, you’d break the band up and then reform without him, we’d do that in high school. “Who wants to tell him?” “I don’t want to tell him, let’s break up and form a new band without him in it.” That’s how you’d find out, “Oh, they didn’t want me in the band.” This was completely liberating, allowing me to flex other muscles musically and trying to expand it and change.

AllMusic: How long did you have in your mind that you wanted to cover "Head Like a Hole"?

Snider: I loved the song, and I’m a Nine Inch Nails fan, but it was my producer who said, “What do you think about ‘Head Like a Hole?’” and I said, “Are you crazy? How does that connect to me in any way?” He said, “It’s powerful and it’s on message, it’s as much of an anthem for its time as ‘We’re Not Gonna Take It’ was, and it rails against the machine, it’s a song about rebellion and fighting back, it’s what you represent.” I knew that, but I never thought about connecting it to me. He said, “I think you’ll kill it,” so we got in the studio, and I got so into it and connected so strongly with it, and I’m really pleased with it.

Doing a song like that is a danger, you’re walking on sacred ground. That song is iconic for its time, it’s anthemic and an amazing song. So it’s not about trying to top it, but it’s about making it my own and being true to it at the same time. When we were doing it, I said, “This sounds too much like the original.” Then my producer put on the original for me, and when you A/B them, it’s like, “Oh shit,” and I realized I’d taken it to a different place.

What a landmark record that was. It was still the eighties, so you have Guns N’ Roses and Skid Row, and then in the middle of all that, this comes out. I didn’t know what to feel, I was like, “This is heavy, but it’s not metal.” It was groundbreaking. I hope he likes it. I’ve met Trent and I think he’s a fan, but I don’t have communication with him. It’s a tribute, to do a song like that, and I hope he says, “He did a good job with that.”

AllMusic: I bet he would have been less accepting back then, but it seems like he's mellowed out a bit.

Snider: It’s like when people say now, “If you could tell yourself 30 years ago that you’d do an unplugged version of ‘We’re Not Gonna Take It,’ I probably would have punched you in the face, literally.”

AllMusic: Decades later, what's your relationship with "We're Not Gonna Take It"?

Snider: It’s all love. When you get a song that connects with the world, like that song has, and it’s practically a folk song at this point, it’s just amazing how that song has grown.

For “We’re Not Gonna Take It” acoustic, my producer said, “I can solo your voice, and not only is it as powerful as ever, but it’s got some mileage on it, it’s got years. When you hear it, it sounds like this guy has been through the mill. I want to highlight that, I want people to hear the rawness,” and that led us to the unplugged version of “We’re Not Gonna Take It” and “So What,” which strips everything away and has the voice out there. Sometimes I’m wincing, it just sounds so torn and tortured.

AllMusic: You could have opted to go an ironic route with it, but you went with a sincere version.

Snider: There’s such a broader story to it, too. My nutritionist called me and said, “I had a dream last night, and you were singing ‘We’re Not Gonna Take It,’ unplugged, and it brought the house down.” I said, “Great, now I have my doctor calling me with song advice,” this is a “punch you in the face” moment. Then he wouldn’t let it go, and he was annoying the shit out of me with emails and phone calls, and I’m almost ready to change nutritionists. I had met him through his girlfriend, Debbie Gibson, and he gets poor Debbie and makes her go in and sing and play a piano version, and it’s nice, but I’m not sold.

So when my producer brought up doing something acoustic, I thought of this, and he said, “It’s not as crazy as it sounds.” He slowed it down and did the piano and stripped the chords down, and we went and did it in one take. That’s when I felt it and I got it, I got my doctor’s dream. It hit people like a ton of bricks. I read a review that said it was like getting punched in the head with the lyrics, and that’s the beauty of it, really.

AllMusic: I imagine you didn't need the lyric sheet in the vocal booth for that one.

Snider: I had to go back and check one lyric, one word. Somewhere along the way, the first two lines had become “We’ve got the right to choose it/There ain’t no way we’ll lose it.” And I said, “Why would I put the words ‘it’ and ‘it’ together, I don’t think that’s what I wrote originally,” and I went back to check, and it was “We’ve got the right to choose, and there ain’t no way we’ll lose it.” But I actually sang it wrong on this recording, I sang “it” and “it”; somewhere along the way it mutated, but those aren’t the correct words.

AllMusic: Is there still a musical hero of yours who you'd love to meet?

Snider: There has to be somebody. Some of them have died, I was a huge Queen fan, and I was at their show when they opened for Mott the Hoople at the Uris Theater, and nobody knew who they were. I was screaming so loud that I was embarrassing the band. If there’s one thing worse than nobody reacting, it’s one guy, especially when he’s seven feet tall in platform shoes with hair scraping the walls, and that was me. I remember Brian May stopping to see what all the commotion was, “What’s going on? One guy is screaming.” But I never got to meet Freddie or David Bowie.

Alice [Cooper], I’m friends with, Robert Plant, I’m friends with. Bon Scott was a major influence on me, the missing piece of my vocal styling. When I discovered AC/DC, that finally solidified my sound. But I can’t think of anybody who’s alive who I didn’t get to meet, and it’s cool to call some of these people friends and be able to shake their hands. I got to tell Steve Jones what effect the Sex Pistols had on me, and my desert island albums, Never Mind the Bollocks is on that list of 10, for sure.

AllMusic: In a genre full of stage names, it must have been kind of cool that you were able to use your actual name.

Snider: A lot of people think that Snider is a made-up name for some reason, that I picked it. I kept it, for sure, because I loved that it was an adjective and not a proper noun. That’s part of my personality, is being a snide motherfuck, I’m snider than you are. So I lived up to the adjective that is actually my birth last name. So there’s a certain pride in that, but also that people go, “I knew that guy,” when the fact is that I was this woefully unpopular person, so it’s great to have all these people claiming they were friends with me, when I can say, “Yeah, I had about three friends, and you weren’t one of them.”

Chris Jericho On His Early Music Memories, His Indoctrination Into Metal and ...

Chris Jericho On His Early Music Memories, His Indoctrination Into Metal and ...