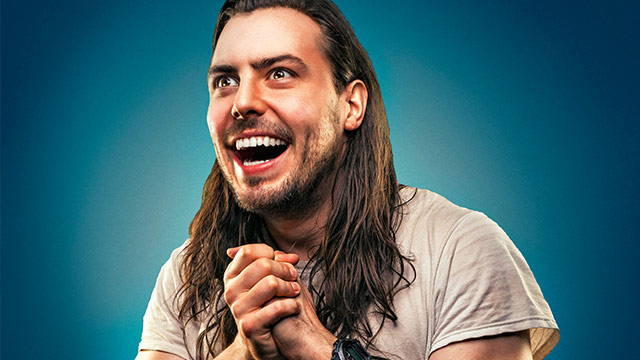 Who needs a new album when your ethos does the heavy lifting? Andrew W.K. doesn't feel rushed to put out new music, and he's still having a blast. He's hitting the road for a quick run of solo shows in the Midwest and east coast, beginning tonight with a sold out show in Grand Rapids, Michigan. We caught up with the eternal party animal and talked about his continued appreciation for death metal, the album he's listened to almost daily for two decades, and learning to be OK with the rate of his musical output.

AllMusic: Fourteen years later, your set is still primarily songs from I Get Wet and you haven't been teasing new music. How does that sit with you?

Andrew W.K.: I just do what I’m told to do, basically, so there’s almost no pressure. It’s like if you had to walk to a friend’s house and you were given directions, you’d just go. You could try to take a shortcut, but then you’re going against when they said, “Please, please go down this road and take it this way,” and you wouldn’t necessarily feel pressure, there’s no rush. I just do what I’m told to do, and it took me a long time to feel OK about that, to not feel frustrated, or to feel out of control in a bad way. Now I realize that being out of control is probably the best thing that’s ever happened to be and allowed me to put all my energy into doing what I’m meant to do, what I’m asked to do, what I’m supposed to do, rather than thinking I’m the one having to control everything. Talk about pressure, that’s very stressful, so that was never the case, and now I realize that, and now I don’t have to feel that way and just do stuff.

AllMusic: You've managed to stay in the public eye in many other ways, though, so it's not like you've been gone.

W.K.: I’m a person, a partier, that was always what I hoped. I want to be a person that someone can go to for a certain feeling, and whether they get it through music or us talking right now or a kids’ show, anything, I want them to be able to come to me for a good, cheered up, joyful feeling. I’m a joy boy. Anything else, it’s just a way to further that sensation. I love music and I am working on new songs, and when it’s meant to come out, I’ll put it out, I guess.

AllMusic: I chose going to one of your shows in 2002 instead of going to my senior prom. What in your life have you missed out on because of music?

W.K.: Just huge portions of life in general, I can’t think of a specific instance, but many times I’ve sacrificed spending time with people doing anything, going out into the world at all, in order to record and work on songs and albums, thousands of hours spent doing that, so in that way you’re passing up every single thing you could possibly be doing, but it’s also life in general, you have an infinite number of things you could do at any one moment and you choose one thing in the midst of all those, it’s very odd in that regard to think about the millions of things that one could do, and somehow we wind up choosing whichever one we do for that moment, however long that moment lasts, and it’s really a thing to marvel at, I’d never thought about it that way.

AllMusic: Part of the lore of your early days is that you either directly or indirectly helped reunite the death metal band Obituary. How much truth is there to that?

W.K.: I wrote a letter to Donald Tardy around 2000 and asked him if he’d be my drummer, because at that point Obituary wasn’t doing anything. They weren’t broken up but were taking a break, they’d done the Back from the Dead album, and I wrote him a letter asking him to be my drummer, never thinking he’d write back, and he did, he called me, I came home one day from work and there was a message on my phone from Donald Tardy. It’s pretty much the first example for me of something completely unlikely and crazy that I thought would never happen, as far as a dream coming true, was actually happening. I’d had a lot of things I was excited about happen that I felt I’d worked for, but this was so left field and I had so little influence on the situation, it wasn’t like I could work really hard and make Donald want to be in my band, it was all his choosing to do.

So I really felt like the party gods had a plan for that, and that began this path, and Donald joined the band, recorded on the album, and brought in the whole crew to be the rest of the band, sound guy, tour managers, stage managers, lighting, monitor people, gave me so much, and on top of that, I’ve never liked a drummer or musician more than Donald Tardy. Obituary is a band I spent more time listening to than almost any other, so it was very surreal and very magical and really gave me the sense that things like this really can happen in life. No one was more thankful than I was, in a bittersweet way, that Obituary got back together, because I hadn’t had a chance to see them play before then, so when they reformed, finally now I could see them, and then I got to play drums onstage with them and stuff like that. So it was very dream-like, and I hope and pray that everyone gets to have some version of their experience like that in life.

AllMusic: Can you remember who handed you your first Obituary record?

W.K.: Very clearly. It was a gentleman named Brian Hightower, this guy was very zany and very intense, who was also one of those people who was a radical music adventurer, and he’d take it upon himself to bring in CDs. We were the same age, so he didn’t seem like an older kid giving me the key to some new dimension, but he’d be so excited about these albums he had, he came in one day with Autopsy’s Mental Funeral, Butchered at Birth by Cannibal Corpse, World Demise and Cause of Death, and I listened to all of them and loved all of them. I was just completely blown away by that music, I’d never really heard anything like that. It was like another dream come true, in a way.

When I’d been younger, I’d seen bands’ album covers that looked really intense, and I’d imagine that their music must sound like monsters, and the most over the top, intense, heavy music, and it would be like KISS, you’d see a KISS photo and think they must sound like monsters, and they’re more traditional, straight-ahead rock and roll music, which is fantastic, but I was always craving this certain sound, and here it is, not only one band, but a whole world of people making this music and into that same feeling and conjuring it up quite well, and I was just hooked.

I remember it as clearly as anything. It gave me a physical sensation that I hadn’t really felt from other music in such a concentrated way, and that was it, I spent more time listening to Obituary and then Napalm Death than any other music. My favorite Napalm Death album was Harmony Corruption, I listened to that album almost every day for almost 20 years, the whole way through. It’s one of those things, I’m sure everyone has some similar version, or I hope people have this. I felt that album was made for me. To be able to listen to something so many times and only like it more, and I liked it a lot the first time, but now to be able to rely on that as an energy source, to be able to turn to that no matter what state I’m in and have it instantly take me to this place of pure physical euphoric energy, it’s one of the things I’m most thankful for in life, it’s like water or food to me, it feeds my soul in a very fundamental way, and I can’t believe how lucky I am that it exists.

AllMusic: It can be tough to explain to people that such angry music can bring positive feelings.

W.K.: It’s beyond emotion. With the lyrics, Barney [Greenway, Napalm Death vocalist] is very amped up and very angry and very passionate, and I passionately agree with a lot of what he’s saying, anyway, probably, but it’s not really about that at that moment. Not that the message or the meaning isn’t important, but there’s a physical power that comes through that, that goes beyond emotion, that goes beyond concepts or ideas or situations or political debates, not just about politics and government, but the politics of life. It’s an escape from that as much as you’re using it to go deeper into those ideas. It’s also just feeling, pure feeling, it’s not angry, it’s just spirited. I feel the spirit, I could use it towards anger, I could use it towards cheerfulness, really any emotion, but before I apply it to emotion, it’s pure feeling, power.

AllMusic: Do you keep up with the current metal scene?

W.K.: Going back 20 year ago, my friends and I never in a million years would have imagined that the hallmark elements of that style and that sound would be, at this point, embraced by so many people, especially people that, back then, we never would have imagined would have liked it. We played Warped Tour in 2010, and a lot of very beautiful young girls, just regular-looking girls, you wouldn’t think they were a metal fan, but they were really huge fans of bands with brutal vocals, blastbeats, that sounded like metal bands. Back then we were trying to find bands like that, and now it’s almost a default sound that bands have. “Oh, we’ll just sound like that.” It’s amazing how popular that’s gotten. And it makes perfect sense to me—who wouldn’t want to have that feeling, it’s so undeniably strong and powerful, and it makes me so happy that people, especially young people, girls—and I say that because it was often times a male-dominated sound—but to see it reach such levels of popularity is very striking, very surprising and very exciting.

AllMusic: As big of a fan as you were, it sounds like you were never compelled to sound like those bands.

W.K.: They’re doing it so well, that’s how I felt, if someone made a sculpture as well as people have made sculptures, it doesn’t mean it’s pointless in trying to do, but I thought, “Maybe there’s a way for me to get to that feeling in a different route,” so it was kind of out of respect for how well these people were already doing that thing. It wasn’t even that conscious of a choice, I felt like I was meant to do this thing. I remember very clearly wrestling with that situation, and it was very scary to think, “OK, I’m just going to do this thing I’m supposed to do and see what happens,” because I figured no one would like it, but fortunately things have worked out. I’m very grateful.

This music, it’s like fuel, it’s like rocket fuel, and all I care about is that it exists. I love it more than ever, and I want to keep it going and I have been able to, thanks to so many people also believing in this feeling. I’m indebted and I’m very grateful. Let’s party.