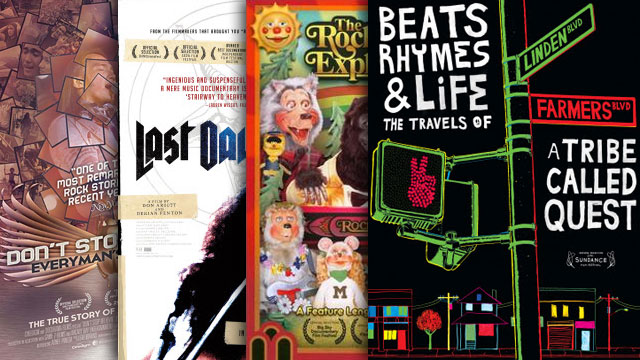 Since not every music documentary has the chance to make it to A Theater Near You, video streaming services have become invaluable for music fans looking for the stories behind the art. In AllMusic Watches, we highlight a few of the music documentaries our staff has taken in recently, for better or worse.

Directed by Michael Rapaport, this film takes a deep dive into the history and conflicts within the members of A Tribe Called Quest. While the second half mires itself in the medical issues related to Phife Dawg's diabetes and conflicts between Phife and the perceived ego of Q-Tip, the first half offers some gritty history of the formation of Tribe and how each of the members came up. Highlights include the story of the incredible hip-hop super-collective Native Tongues (De La Soul, Jungle Brothers, Monie Love, Afrika Bambaataa, Black Sheep, Common, Black Star, Leaders of the New School, Gang Starr, Brand Nubian and Queen Latifah before she was the entertainment personality that people recognize today), and the soundtrack compiled, remixed and curated by Madlib and Peanut Butter Wolf. (Available on Crackle)

This 2012 doc details Journey's quest to find a new lead singer after their relationship with Steve Perry cooled and Steve Augeri encountered medical issues with his voice. Famously, the band found a new lead singer by combing through YouTube clips of lead singers and Journey cover bands, eventually discovering the very amiable Arnel Pineda in Manila. The documentary walks through some very familiar paces (established band discovers lead singer when hope is almost lost, singer is a scrappy kid who fought addiction, footage of the mean streets where the kid grew up, trepidation from the core audience leads to acceptance, etc), and the emotion in the film can feel cloying at times. On the other hand, Pineda is incredibly likable and his ability to mimic Steve Perry on the classic tunes is admirable, and there is some voyeuristic behind-the-scenes footage of keyboardist Jonathan Cain and Pineda going through very technical pre-show vocal acrobatics (as it turns out, life on the road with Journey is not fraught with writhing groupies and trashed hotel rooms). Despite the fairly straightforward structure, there is enough in the film to keep music enthusiasts entertained and die-hard Journey fans will find plenty of reasons to raise their lighters in triumph. (Available on Netflix)

Until this documentary, only a small subset of the heavy metal community had even heard of Pentagram, the pioneering 1970s American doom metal outfit fronted by the wide-eyed Bobby Liebling. Last Days Here features Liebling's personal turmoil more than the music he created, but when he's not busy searching for a missing crack rock in the cushions of his couch, the documentary manages to show Liebling's Pentagram as an exceptional band at the forefront of American heavy metal. And unlike the titular band from Anvil! The Story of Anvil - praise from Lars Ulrich aside - Pentagram is actually a band worth revisiting. (Available on Netflix)

We wrote at the end of last month about how Green Day's ambitious three-album project was hijacked by frontman Billie Joe Armstrong's substance abuse issues and subsequent retreat from performance. ¡Cuatro! paints a happier picture of a band working on a project they really do seem to believe in, but one that would require a lot of momentum to keep going. The band plays sets of only new material in tiny clubs, simultaneously to the delight and frustration of audiences, and tries to keep up with Armstrong as he keeps pouring out song after song. The albums may not have made the splash the band was hoping for, but there are definitely some tracks from these sessions worth lending fresh ears to. (Available on Hulu)

Only a band in the loosest sense - meaning not at all, really - the welcoming/terrifying animatronic animal entertainers from Show Biz Pizza - now Chuck E. Cheese - have a minuscule but devoted following. The "band" re-entered public consciousness through a series of YouTube videos where they had been reprogrammed to mime along with modern - and often profane - hits, and this documentary digs into the lives of the people who have tracked down, restored, and installed their very own Rock-afire Explosion lineups in their homes. The robot band was never quite the cultural firestorm that the documentary sometimes tries to suggest that they were, but it's a quick trip down memory lane for anyone who still has recollections of what they were confronted with alongside cardboard pizza, sticky arcade games and trading tickets for cheap trinkets. (Available on SnagFilms)