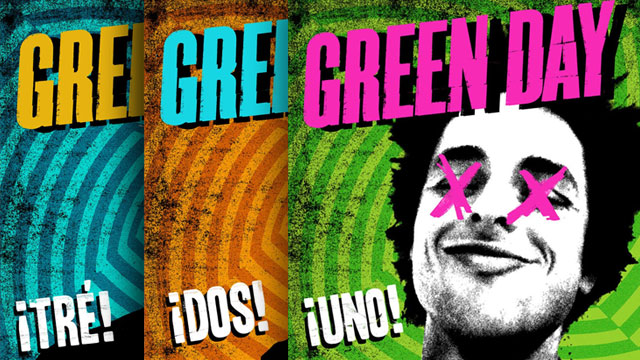 When Green Day announced a trio of releases spanning 2012 and 2013 with a hyperbolic 3,000 shows to support the albums, the idea seemed equal parts cheeky and and sincerely ambitious. But then again, this was a band that had become famous writing songs about suburban boredom to, 10 years later, writing more songs about suburban boredom and turning them into a successful Broadway musical, so perhaps they could really pull it off. But four days before the first album’s release, frontman Billie Joe Armstrong cracked up onstage, put himself in rehab, and the Green Day train was derailed. The subsequent albums were released with minimal fanfare, and the release of the third was bumped up a month to keep the band in the public consciousness, but results dwindled with each release. We've created a timeline below for the release cycle, as well as a look at what the band has been up to lately.

April 11, 2012 - Green Day announces that they are in the studio recording a trilogy of albums for release in September, November and January.

August 17, 2012 - Bassist Mike Dirnt facetiously says that the band will play "about 3,000 shows" in support of the records, which some media outlets take more seriously than others.

September 6, 2012 - Green Day delivers a raucous performance of "Let Yourself Go" at the MTV Video Music Awards. A few choice words slip past the censors.

September 21, 2012 - Armstrong has what the media invariably refers to as a "meltdown" onstage at the iHeartRadio Festival in Las Vegas after being told that the band's set time is running out.

September 23, 2012 - It is announced that Armstrong will be immediately entering rehab. All tour dates are postponed.

March 10, 2013 - Green Day performs for the first time since Armstrong's rehab stint. The setlist features five songs from the trio of recent releases, while American Idiot alone gets six cuts.

September 24, 2013 - 364 days after the first album's release, the band debuts ¡Cuatro!. a documentary about the making of the trilogy.

October 2013 - Armstrong and Norah Jones announce the release of Foreverly, a track-by-track re-imagining of the Everly Brothers' Songs Our Daddy Taught Us.

January 26, 2014 - Armstrong performs "When Will I Be Loved" with Miranda Lambert at the Grammys in tribute to Phil Everly.

It’s now 16 months since ¡Uno!, and Green Day has played 16 American shows - 48 total worldwide - in support of the records after their release. With the 20th anniversary of Dookie on February 1, there’s the chance that the latest albums will continue to get overlooked in acknowledgement of the milestone. Other than a quick run through the Australian festival circuit, there’s nothing on Green Day’s public calendar for 2014, and the band has been quiet. Maybe one day ¡Uno!, ¡Dos! and ¡Tré! will get their due, but for now, it appears that Armstrong’s struggles threw a sizable wrench into the Green Day machine and the damage has yet to be repaired.

Regardless, there are some smokin’ tunes spread across the three albums. Here’s a playlist of some of our favorites.