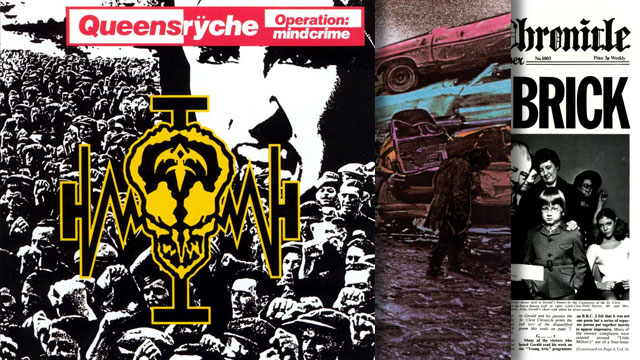 Last week we unveiled our editors' favorite concept albums, and you all weren't timid about letting us hear about ones we left out. So as a nod to all of the thoughtful and politely-worded feedback we received, here are some of the most frequently-mentioned albums we've seen in the comments and on social media. But we're sure there are plenty more to discuss, and since part of the fun of concept albums is debating what does and doesn't qualify as one, we know you'll let us hear all about it.

The album with the most vicious defenders - and a personal favorite of your trusty blogger - was easily Operation: Mindcrime by Seattle progressive metal band Queensrÿche. The tale of Nikki, hooker-turned-nun Sister Mary and Dr. X didn't make any of the editors' lists, but the drama, scene-setting, and, primarily, a powerful set of songs have allowed the album to remain in high esteem for over 25 years. Just from taking a listen to any of the several live versions of the album the band has released and hearing the crowd recite the interstitial dialogue like it's the Rocky Horror Picture Show ("Sweet dreams...you bastard" is always a big moment), the crowd-pleasing nature of Operation: Mindcrime can't be denied.

Another personal favorite that didn't make the list, and one many of you mentioned, Jethro Tull's 1972, one-track, anti-concept album Thick as a Brick. After the band had been inundated with the "concept album" branding with the release of Aqualung, they conceived a satire of the idea of the concept album itself. Thus was born Thick as a Brick, an album with a backstory so involved that it required a newspaper insert to pretend to explain it, but ultimately anyone who tried to decode any deeper meaning or decipher the shocking word "g--r" used by precocious poet Gerald Bostock was met with no coherent answers. But the album's silly origins don't distract at all from the music, which is a progressive, folk rock tour de force.

Even without the recent passing of Lou Reed, his reteaming with John Cale on Songs for Drella, an album honoring the life of Andy Warhol, is a noteworthy concept album that still resonates nearly 25 years later. Reed's droll delivery in character as Warhol on the opening "Smalltown" over Cale's bouncy piano sets a tone that comes across as more enthusiastic and ambitious than downcast, and Reed's wailing guitar fills on "Forever Changed," sung by Cale, sound like he's finally comfortable being a guitar hero. And for a man who spent so much of his career cloaked in sarcasm and irony, Reed's parting "Goodbye, Andy," at the album's conclusion is dazzlingly sincere.

Even though our Stephen Thomas Erlewine acknowledges in his five-star review that "the concept isn't immediately clear or comprehensible," Hüsker Dü's 1984 double-album Zen Arcade is definitely tonally and structurally a complete entity. On a song level, the bitter, four-chord "Never Talking to You Again" immediately ingrains itself in the listener's head, the heartbreak of "Pink Turns to Blue" is palpable, and the "take a look around" message of "Turn On the News" helped it land a spot on the Rock and Roll Hall of Fame's "500 Songs that Shaped Rock and Roll" list. The hasty recording of the album probably helps the song feel more like parts of a whole, rather than individual disjointed thoughts, and the exhaustion the listener feels by the end of the 14-minute "Reoccurring Dreams" makes the album feel like a real journey.

It's hard to know where to start with Kiss' Music from "The Elder." The easy road would be to snark on the idea of a concept album engineered as a companion piece to a movie that was never made, an album musically far afield from the band's strengths while producer Bob Ezrin was in too much of a cocaine tailspin to do anything about it. But either as a punchline or as an item of genuine fascination, the legacy of Music from "The Elder" lives on. The band has mostly avoided reminding audiences that the album even exists, but has been known to perform some of its tracks at smaller fan-centric events, such as the band's cruise. It's also noteworthy for being the least-mentioned musical collaboration in Lou Reed's obituaries - he's credited as a co-writer on three of the songs.

A textbook concept album, DBTs lay out a sprawling and lumbering tale of trying to make it as a rock band while walking in the shadows of some of the legends of southern rock. More than just a pile of songs, a literate thread runs throughout both of the discs in this double album (yet another concept album staple, even un-ironically divided into Act I and Act II), illustrating Patterson Hood's "duality of the Southern thang" quite beautifully. A highlight remains "Let There Be Rock" which kicks off Act II with a "pretty damned autobiographical" account of Hood's teenaged years, and how partying and going to arena rock shows kept him from going off the deep end in high school. A terrific song-by-song walk-through is available on Drive-By Truckers' website.

AllMusic editor Chris Steffen grew up with Mike Snyder, the voice of the news bulletins on Operation: Mindcrime, as his local newscaster in Dallas.