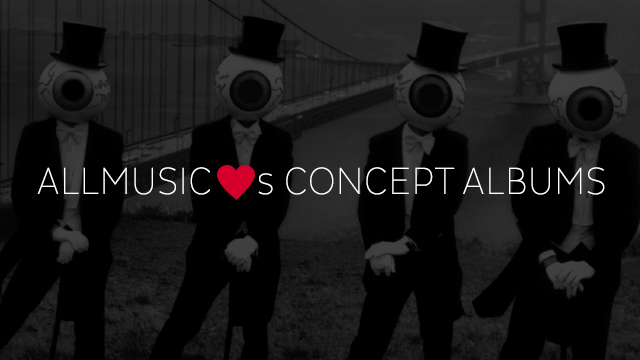 What is a concept album? There is no simple answer to this question. A concept album could be a collection of songs by an individual songwriter or a particular theme -- these are the concept LPs that reigned in the '50s, when Frank Sinatra assembled records around a certain sensibility and when Marty Robbins sang Gunfighter Ballads and Trail Songs. Jazz musicians created suites that told a story and folk singers explored ancient tales, records that are undoubtedly conceptual in their very nature but the phrase "concept album" is inextricably tied to the late '60s, when rock & rollers began stretching the limits of their art form.

By popular consensus, the first rock concept album was the Beatles' Sgt. Pepper's Lonely Hearts Club Band. In reality, the concept of Pepper was a bit loose -- the Beatles were pretending to be another band, which allowed them to try all kinds of new sounds and styles -- but the ambition was infectious and soon countless rock acts were doing their own concept album. Many chose to follow the footsteps of Ray Davies and Pete Townshend and constructed their own "rock opera," an album that told an actual story (whether it was a comprehensible story or not was another matter entirely).

The golden age of the concept album/rock opera lasted until the mid-'70s but the idea of a cohesive conceptual LP has proven irresistible to all kinds of modern musicians. Hüsker Dü made a hardcore punk opera in Zen Arcade, progressive hip-hop trio De La Soul has heard the siren call of concept albums, neo-psychedelia mavericks Flaming Lips have made conceptual records a specialty of theirs. Here, several AllMusic staffers celebrate their favorite concept albums, whether that means John Coltrane's A Love Supreme, XTC's Skylarking, Frank Zappa's Joe's Garage, Magnetic Fields' The Charm of the Highway Strip or, yes, Pink Floyd's The Dark Side of the Moon. Each one of these and many more provide many reasons to love concept albums.

Stephen Thomas Erlewine
As far as concept albums go, I'm a traditionalist, which means I believe that there should be some semblance of a story (however threadbare it might be) or a discernable idea that ties it all together. That also means I'm not inclined to call a record of thematic songs "concept albums," which means there are no '50s Sinatra LPs here, nor are there any collections of truck driving songs or spotlights on songwriters. No, my 20 concept albums are what concept albums should be: ambitious narratives that hardly make literal sense, even when accompanied by a lyric sheet, and usually made in the '70s, long before the dawn of punk.

Frank Sinatra - Watertown
The Kinks - The Village Green Preservation Society
The Who - The Who Sell Out
The Kinks - Arthur (Or the Decline and Fall of the British Empire)
Genesis - The Lamb Lies Down on Broadway
The Who - Quadrophenia
David Bowie - The Rise and Fall of Ziggy Stardust and the Spiders from Mars
The Kinks - Lola Versus the Powerman and the Moneygoround, Part One
Elton John - Captain Fantastic and the Brown Dirt Cowboy
Small Faces - Ogden's Nut Gone Flake
Pink Floyd - Wish You Were Here
Donald Fagen - The Nightfly
Pink Floyd - The Dark Side of the Moon
The Pretty Things - S.F. Sorrow
Yes - Tales from Topographic Oceans
The Alan Parsons Project - I Robot
The Neon Philharmonic - The Moth Confesses
David Bowie - Diamond Dogs
Electric Light Orchestra - Eldorado
Neon Neon - Stainless Style

Gregory Heaney
Maybe it's a side effect of my first record being David Daydreamin' on a Rainy Day (by Sesame Street’s Northern Calloway), but I've always loved albums with narrative. I remember being obsessed with a copy of Tommy that I liberated from my late uncle's record collection down in my parents musty basement, and would listen over and over, amazed that a collection of individual songs could tell an entire story. For my list, I've tried to compile a collection of records that have given me that feeling again in recent years. These are all albums that I can pick up at any time and get lost in, mining every last morsel of delicious (or emotionally devastating, in the case of Harvey Milk) continuity for the umpteenth time. In an effort to steer clear of the obvious classics like Ziggy Stardust, which we all know and love, I've tried to keep my list relatively contemporary (except for A Love Supreme, which is one of the most gorgeous pieces of music ever recorded). Some are manic, some are heartbroken, and some are mysterious, but all of these albums have a way of telling a story that I find captivating. Happy exploring, sonic adventurers.

The Hold Steady - Separation Sunday
The Thermals - The Body, the Blood, the Machine
Fucked Up - David Comes to Life
Isis - Oceanic
The Decemberists - The Hazards of Love
Of Montreal - The Gay Parade
Titus Andronicus - The Monitor
John Coltrane - A Love Supreme
Harvey Milk - A Small Turn of Human Kindness
Make-Up - Destination: Love - Live! at Cold Rice

Thom Jurek
There are dozens and dozens of rock and pop concept albums, maybe even hundreds. While many are ubiquitous, we tend to dismiss others -- often rightfully so -- as icons to excess. What follows is a list of non-rock concept records I actually listen to and stick out for reasons that are too arcane to go into. These are listed alphabetically. To be honest, 20 is such a limiting number, I could easily have chosen 20 others -- Marvin Gaye's other concept record, Here, My Dear, for instance, or John Cage's and Kenneth Patchen's The City Wears a Slouch Hat, or Hannibal Marvin Peterson's Angels of Atlanta, to name a quick three. When it comes to rock, the number could easily have been 50 (and for sure, Yes' Tales from Topographic Oceans would have been among them).

Timothy Monger
Before I even really knew what a concept album was, I spent the summers of my youth mowing my parents' lawn, listening to The Wall, Operation: Mindcrime, and Ziggy Stardust. My brother introduced me to the Moody Blues catalog and then a bevy of other albums I came to recognize as "conceptual" started to enter my orbit, like Peggy Suicide, Skylarking, and Pop Goes the World. Unifying themes were always something I gravitated toward in my life and while many people would run the other way when they heard a favorite artist utter the words "concept album," it usually made my ears perk up. Whether they follow a straight narrative or a loose thread, I like the ambition and attempt at cohesion in these themed albums. Here are 20 concept albums that made an impact on me.

Julian Cope - Peggy Suicide
Men Without Hats - Pop Goes the World
Electric Light Orchestra - Time
Bee Gees - Odessa
The Magnetic Fields - The Charm of the Highway Strip
Willie Nelson - Red Headed Stranger
XTC - Skylarking
The Who - The Who Sell Out
The Streets - A Grand Don't Come for Free
Iron Maiden - Seventh Son of a Seventh Son
The Everly Brothers - Roots
Pink Floyd - The Wall
The Moody Blues - In Search of the Lost Chord
The Kinks - The Village Green Preservation Society
David Bowie - The Rise and Fall of Ziggy Stardust and the Spiders from Mars
Johnny Cash - Sings the Ballads of the True West
Paul Clayton - Whaling and Sailing Songs from the Days of Moby Dick
Randy Newman - Good Old Boys
Marvin Gaye - What's Going On
Harry Nilsson - The Point!

Sean Westergaard
Yeah, I like me some concept albums. I actually had to leave a bunch of things off because I didn't feel they were fully "concept-y" enough for this exercise. So albums I dearly love, like We're Only in It for the Money or Wish You Were Here, that many people often think of as "concept albums," didn’t make the cut because there isn’t really an over-arching storyline carried throughout (even if the albums are nearly perfect as they are and really only exist as entire albums in my mind). Also, albums like Colors by Ken Nordine were left off for similar reasons. Of course, rules are made to be broken, and with that in mind, here's my list in no real discernable order, except, of course, that the Residents are kings of the concept album.