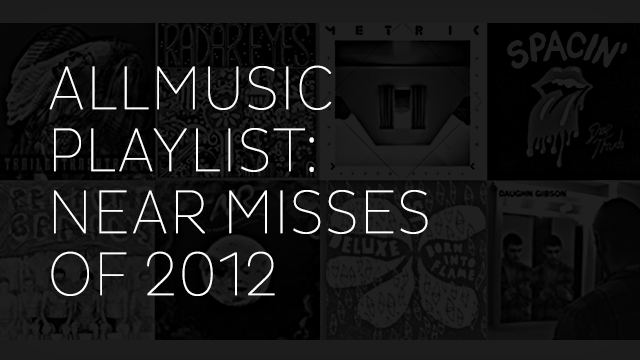 Every year during the new holiday ritual of making out top tens, best-of's and top best essentials lists, there's a good chance that something pretty darn good is going to be left out in the cold. When the AllMusic editors put our lists together this year, we left off a bunch of stuff that was almost good enough to be featured but for one reason or another, just didn't quite make it. This week's playlist gives these near-misses their chance to shine as we run down some of the albums that just barely escaped our lists.

Check out the editors' picks in blurb and video form below and subscribe to the playlist on Spotify - but don't stop there, 'cause we wanna hear from you! Scroll to the end of this post to learn how to share your Near Misses of 2012 track picks.

Tim Sendra
Metric – Synthetica
"Breathing Underwater"
I thought the group's last album, Fantasies, was pretty great stadium indie rock, filled with total jams and topped by Emily Haines’s wonderfully human-sized but icy cold vocals. Didn’t know how they could top it, but really, they didn’t need to. Making an album just as good was treat enough for anyone like me with a hidden soft spot for bands like this. Well, not any other bands like this really. Only Metric, because they do it right! Right? A song like "Breathing Underwater" reaches the back row of the arena, but also creeps in under my defenses and awakens the long-slumbering (and thought to be expired) teenage U2 fan in me. I don't go in much for guilty pleasures...but this is totally a a near-guilt experience.
https://vimeo.com/53390886#

Spacin' – Deep Thuds
"Empty Mind"
I only just heard this last week but it blows away a bunch of what was in my top 20 -- in fact it may even shove its brutish way into my top 10! The Philly knuckleheads make thrillingly raw and tuneful lo-fi noise that brings back memories of the classic 90s lo-fi age, but with a heavier and deeper thud. “Empty Mind” is the track that speaks to me the most, but the rest of the record scrapes cool melodies out of the muck and puts lots of scrappy heart in their art. From what I can tell, the LP is already sold out but I’m sure you can find the MP3’s somewhere…
https://www.youtube.com/watch?v=pmss4WN9Vys

Heather Phares
Trailer Trash Tracys - Ester
"You Wish You Were Red"
Unlike many other keepers of the dream pop flame in the 2010s, Trailer Trash Tracys don't rely towering guitars to create a spacious sound. Instead of piling sounds up, they carve them away, making Suzanne Aztoria's vocals the focal point. She's the key to how well the band mines the tension between innocence and darkness: Her deadpan style brings a low-key sultriness to "You Wish You Were Red,” a song that could be on the soundtrack of that rumored Twin Peaks revival, if it ever got off the ground.
https://www.youtube.com/watch?v=Zztx7FBMr04

Perfume Genius - Put Your Back N 2 It
"Dark Parts"
There's a strong hymnal, quality to Mike Hadreas’ second Perfume Genius album, Put Your Back N 2 It, as well as a confessional bent that underscores the need to be direct, to be vulnerable and to reach out for intimacy no matter what. On "Dark Parts," Hadreas comforts a lover about being molested, singing "I will take the dark part of your heart into my heart” with a mix of strength and fragility that is truly heartening.
https://www.youtube.com/watch?v=E5WNqvdIfJ8

Air - Le Voyage Dans La Lune
"Sonic Armada"
Le Voyage Dans La Lune, the expanded version of Air’s score to Georges Méliès' 1912 sci-fi classic, evokes both meanings of the word "trip." Sonic Armada," which mixes a martial beat with a groovy, insistent keyboard line and a bassline as bouncy as marching on the moon, harks back not only to the duo's own 10,000 Hz Legend, but the turn-of-the-century trippiness that ultimately inspired many of the progressive rock bands of the '60s and '70s.
https://www.youtube.com/watch?v=Jw3h-JrsRWg

Matt Collar
ST Deluxe - Born Into Flame
"Evil Dead"
Scottish noise rockers ST Deluxe delivered their superb sophomore album, Born Into Flame, late in 2012 which is the only reason it didn't make it onto my “Best Of” list. The joyously euphoric “Evil Dead,” which takes its title from Sam Raimi’s cult-classic horror film, is a catchy slacker rock anthem.
https://www.youtube.com/watch?v=sPNRI--NrP8

Gregory Heaney
Melody's Echo Chamber - Melody's Echo Chamber
"You Won't Be Missing That Part of Me"
If there's one album I really regret not being able to toss on my year-end list, it's Melody's Echo Chamber. Like the 2012 Tame Impala album, Lonerism, this album sits at that perfect intersection of dreamy melody and crunchy production, and as I listened to it for the first time while doing the dishes on a lazy Saturday afternoon I was overcome with the GOB-like realization, "I've made a huge mistake."
https://www.youtube.com/watch?v=gDyhl5GSje4

Chrysta Cherrie
Radar Eyes - Radar Eyes
"Miracle"
Mixing spacey synth, squalling guitar and reverb-clouded harmonies, Radar Eyes sit on the fence of lo-fi noise pop and post-punk. Their self-titled debut puts a sharp new take on time-tested sounds from early '70s Brian Eno, to the Creation Records roster, to contemporaries of their native Chicago like the Ponys, best captured on the swirling, hooky "I Am".
https://www.youtube.com/watch?v=DH16ZTGwhxQ

Daughn Gibson - All Hell
"In the Beginning"
One of the biggest surprises left of the dial in 2012, Pennsylvania-based artist Daughn Gibson crafted a stylishly moody, atmospheric sound around his crooning baritone vocals, trippy Arthur Russell-esque electronics, and noir country samples on debut album All Hell. Tracks like "In the Beginning", which juxtaposes a dusty piano loop against pitch-shifted vocal samples, conjure a dream world with one foot firmly in the past and the other bounding forward. Speaking of forward, Gibson signed to Sub Pop over the summer; look for a new album there this year.
https://www.youtube.com/watch?v=fuOP8i-wKE0

Give these tunes a spin in playlist form, and keep 'em coming by sharing your favorite songs from albums that just missed your personal best of 2012 list. Spotify users can contribute by adding AllMusic Editors to your people list, and then sending your selections to our inbox. Not a Spotify user? Share your track picks on the AllMusic Facebook page or by tweeting @AllMusic with hashtag #nearmisses2012.

The Poplist with Tim: 2011's Near Misses

The Poplist with Tim: 2011's Near Misses